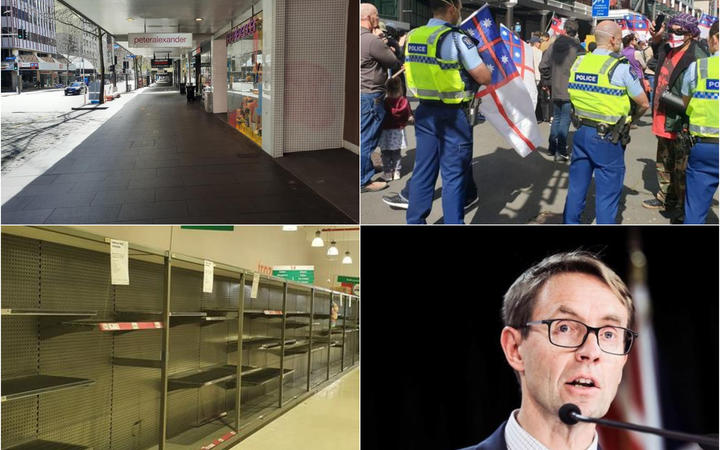 As test results rolled in this morning, it was announced four other people were Covid-19 positive. The new cases were linked to Case A, a 58-year-old Devonport tradesman, diagnosed with the virus yesterday.

It was subsequently confirmed he had the Delta variant, something health experts already took for granted.

Two more cases were announced at the 1pm media briefing by Prime Minister Jacinda Ardern and Director-General of Health Dr Ashley Bloomfield, again all linked to Case A, and another three were added to the total towards the end of the day.

The three include a 60-year-old woman who has no known link to the existing cluster, but does have a link to the border.

The other two are a man in his 20s who is the partner of a known case who was reported as a positive case this morning; and a woman in her 20s who has a connection with another case reported today.

Two of the cases announced at 1pm today have also now been linked to existing cases, including a female teenager who was a close contact of a case reported today and a man in his 20s who visited the household where three of the cases reported today live.

An AUT student who was at a lecture yesterday is also among the new cases of Covid-19 reported in the community today. The student was infectious when they attended a Social Institutions lecture in room WG403 on AUT's City Campus between 11.30am and 1pm yesterday. 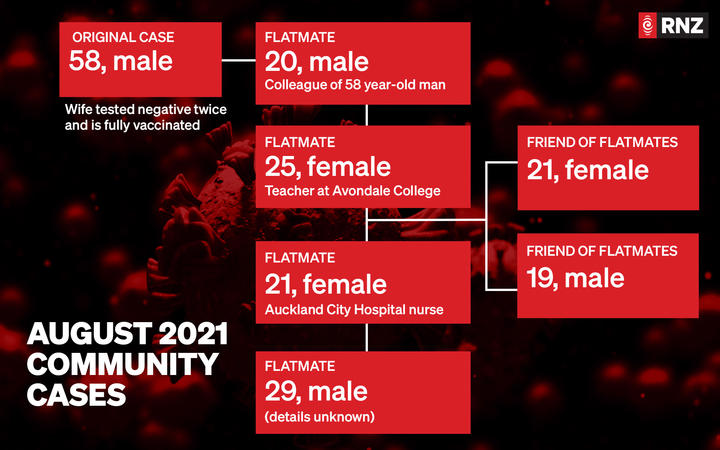 The first seven cases. A further three have been announced - two connected to the cluster, and one who is not, but has a link to the border Photo: RNZ/Vinay Ranchhod

Further details about the three most recent cases will be announced at the 1pm update tomorrow.

She said three people had tested positive with this Covid strain in New Zealand managed isolation facilities, including two this month. It will be known later this evening if Case A's strain matched either of these strains in managed isolation.

Locations of interest have spiralled in light of the cases and the Ministry of Health is regularly updating these on its website.

It was announced that one of the women infected had visited a North Shore church on Sunday morning and also gone to a nightclub in Auckland's central city on Sunday night.

Central Auckland Church of Christ in Freemans Bay and SkyCity Casino are being treated as important locations of interest.

Dr Bloomfield and modeller Professor Michael Plank said cases of the Delta variant could exceed 100, but that the hard lockdown would give authorities time to stamp it out. 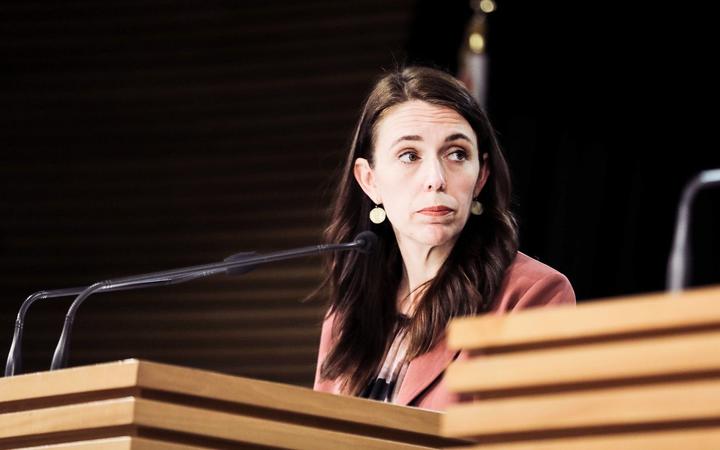 The government made it mandatory to wear masks while visiting essential services, including supermarkets and petrol stations.

Speaking to media this afternoon, Prime Minister Jacinda Ardern said: "From 11.50pm tonight, it will be mandatory for everyone aged 12 and over to wear a mask when they are visiting any of the essential services that are currently open, including supermarkets, pharmacies and service stations."

Staff will also be required to wear a mask. Mandatory mask use includes places like bus terminals and taxis.

Meanwhile, supermarkets have experienced a run on products, with stocks being diminished as people panic-buy items during lockdown.

Supermarket chain Countdown is continuing to limit the amount of some products people can buy in Auckland and the Coromandel, as shelves empty fast.

Countdown also says it has purchased an extra 2000 crates of fresh fruit and vegetables to boost its fresh produce supply.

Also addressing media today was Finance Minister Grant Robertson, who said he was confident the the economy would be resilient in the face of the current outbreak.

Robertson yesterday announced businesses that had a 40 percent drop in revenue would be eligible for the wage subsidy scheme and could also apply for the resurgence support payment.

He said the government did not need to take on additional borrowing at this time.

"Clearly if we were in a situation as we were last year and we had a very extended lockdown, the Reserve Bank would look at what its role is."

Residents in Northland said today they were concerned to see high traffic levels heading up highways, fearing Aucklanders were coming en masse to stay in holiday bachs, potentially bringing the Delta variant with them.

Police turned back vehicles heading into the Coromandel and urged the public not to set up their own checkpoints.

Prime Minister Jacinda Ardern announced this afternoon a resumption of vaccinations, paused to ensure public safety during the transition to alert level 4 lockdown.

Ardern said plans are being activated for all DHBs to resume vaccinations under level 4 conditions, and in some cases they would resume today.

She said people who had booked in for a vaccine for tomorrow onwards should go to receive the jab, even if they had not heard anything.

"To put it bluntly if you've had the vaccine you are less likely to catch Covid-19 and much less likely to get sick or die," she told the 1pm media briefing. 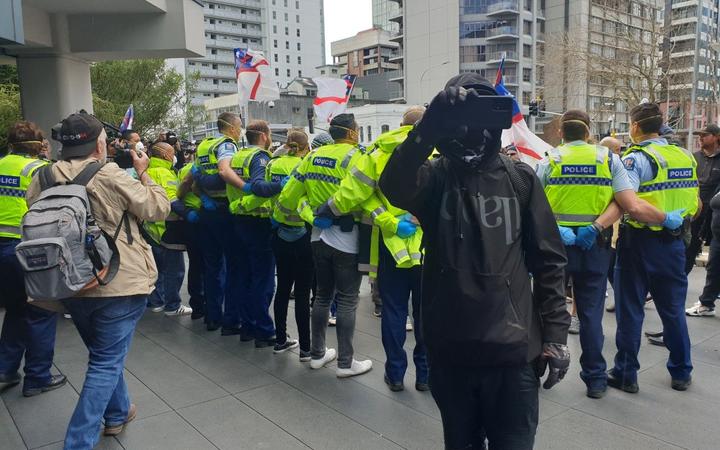 While people adjusted to the new health crisis, others less well-adjusted came out on the the streets to protest what they claimed was an unjust infringement of civil liberties.

Prominent conspiracy theorist Billy TK led the small crowd of about 50 protesters outside TVNZ's HQ in Auckland and was arrested by police. Police confirmed four arrests and four further arrests at a protest in Tauranga.