The New Zealand Nurses Organisation (NZNO) says its members do not believe the commitments made by the district health boards around staffing and pay will be carried out. 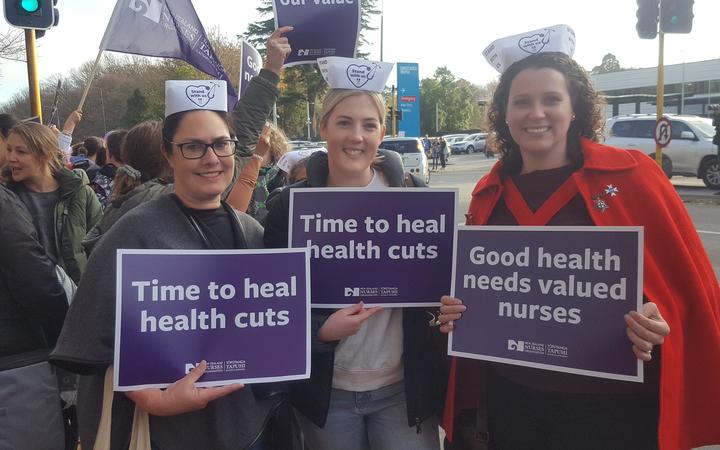 Members of the organisation have rejected the latest offer, meaning strikes are back on the table.

The union's industrial advisor, David Wait, said it was a better offer than last time but its members still had concerns.

"In the end the members decided that the offer on the table from the DHBs didn't provide enough certainty around addressing undervaluation of work or around ensuring that there was accountability around unsafe staffing."

Wait told Morning Report they have been promised that staffing levels and the fact that the work is undervalued would be fixed in the past.

"While the offer that the DHBs put forward made commitments to do both of those things, I think it's the fact that we've had these commitments in the past and that they've not been delivered on probably led members to the decision they've made."

Wait said there have been recent cases where hospitals have been operating at 120 percent of their capacity which has an impact on nurses and patient care.

"You know after years and years of wanting to have safe staffing addressed and having these commitments, our members are really taking a stand for the profession."

District health boards say they have made considerable effort to meet the demands of nurses, who voted 'No' to its latest pay offer.

The DHB's spokesperson, Jim Green, told Morning Report it was disappointing given that it is the fourth offer that has been made and DHBs worked carefully with the Nurses Organisation to try and ensure it would meet nurses' requirements.

He said the latest package included a commitment to nursing numbers, to recognise worries about unsafe working environments.

"Since the last negotiations we've actually added another 3000 nurses into the workforce as an example of how we are actually committing to make this work."

He said the DHBs are keen to hear more from the nurses about what a solution could look like ahead of planned strikes in August and September.

Green said strike action is very disruptive for the public.

"It diverts us all to put the safety mechanisms in place to keep the public safe during that period of time when we could actually be carrying on with the agreements that we've put in place through this offer to actually make further progress than we already have."

He said a lot of work has been done around the pay equity claim and the NZNO and the PSA have been partners.

Green said it is historic undervaluation of nurses and it will take some time to properly address that.

The first strike is scheduled for 19 August.