A line of thunderstorms is heading towards the upper North Island this afternoon. 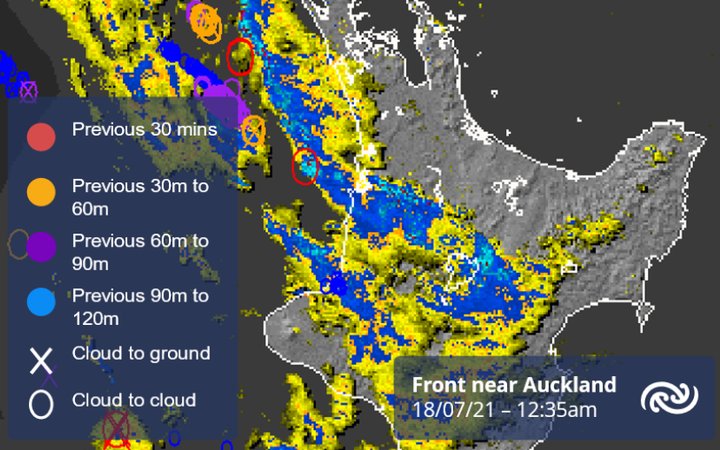 MetService is predicting heavy rain and thunderstorms for much of the North Island. Photo: MetService

MetService has issued a severe thunderstorm watch for Northland, Auckland and Waikato.

MetService forecaster Dan Corrigan said that the storms may cause damage.

"When we're seeing the thunderstorms going over with that line, there's the potential that some of them can become severe and produce possibly damaging wind gusts of 120 kilometres per hour," he said.

The warning is effective from 1.30 to 4pm today.

"Thunderstorms within this line have the potential to become severe and produce damaging wind squalls of 120km/h or possibly a small tornado," MetService said in a statement.

Heads up Aucklanders. A long band of rain then showers is close by as a front approaches from the west. This latest radar image shows the rainband along the front. ^AB pic.twitter.com/3FWBwWIvn2

MetService said the winds will be strong enough to bring down trees and power lines and make driving hazardous.

If tornadoes occur, they're expected to only affect very localised areas.

Here is an excellent overview of number of rainfall totals for the 48hrs leading up to 2pm this afternoon. The data from the Marlborough District Council Floodwatch page, accessible here https://t.co/O2FO8lRlE0 Kenepuru 259mm in 48hrs, Rai Falls 230mm in 48hrs. Stay safe.^AB pic.twitter.com/IDM2n4tYwg

A heavy rain watch is also in place for the ranges of Bay of Plenty east of Whakatāne and the ranges of Gisborne, effective until 11pm tonight, and for Waitomo and northern parts of Taranaki until 2am Monday.

There's also warnings for periods of heavy rain in Nelson west of Motueka, and the Tararua Range into the evening.

You don't need to be a meteorologist to see that atmosphere has been particularly busy around New Zealand over the last 48 hours ️ ⚡ pic.twitter.com/2kJQi7kklW

The latest alert comes a day after severe rain and flooding affected much of the South Island, leading to hundreds of evacuations.

In Wellington, cleanup is continuing as the rains move north.

Wellington City Council welfare staff and volunteers worked quickly last night to find temporary accommodation for about 35 InterIslander passengers after their ferry was turned away from Picton yesterday evening.

City staff continued checking and clearing damage around the city today, with reports of trees down and road slips in some locations.