The South Island is in for another battering from the weather, as MetService issues a severe weather warning for central and southern New Zealand. 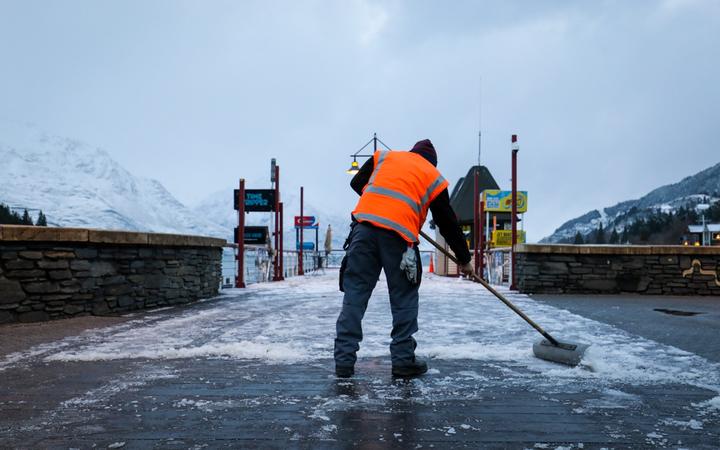 Queenstown residents woke up to a white blanket of snow as a cold blast worked its way up the country last week. (File photo). Photo: RNZ / Nate McKinnon

Gale force winds are forecast, followed by heavy rain and then snow over the next few days.

Severe gale winds are expected in the Canterbury High Country from 11pm, with gusts reaching 130km/h.

MetService said a couple of fronts are expected to move over New Zealand on Tuesday and Wednesday causing heavy rain, strong winds and snow.

This comes after a large area of high pressure brought fine and frosty weather to most places over the weekend. The coldest temperatures recorded were -11.2C at South Waiouru in the North Island on Monday morning, while St Arnaud in the Nelson Lakes area recorded -9.4C.

"The high is starting to lose its grip on New Zealand today, and a pair of fronts will start making their presence felt on Tuesday," MetService meteorologist Stephen Glassey said.

"Most places get a reprieve from the frosty mornings and instead get a period of wet and windy weather."

The West Coast of the South Island is the first place to feel the brunt of the incoming weather systems, with heavy rain and strong winds from Tuesday morning, then other parts of the country get a dose during the remainder of Tuesday and Wednesday.

The bad weather is forecast to reach Wellington and Wairarapa by Tuesday afternoon and could cause damage to trees, powerlines and structures.

Driving may be hazardous in affected areas, especially for those driving high-sided vehicles or motorcycles.

Wave goodbye to the settled weather as the next wintry system passes over the country through the first half of this week.

Heaviest rain in the west, strong northwesterlies over the alps and snow possible to 100m in the far south ^Lewis pic.twitter.com/NA6NzuZ4em

From tomorrow morning, heavy rain is forecast for the West Coast of the South Island which may cause slips and surface flooding.

MetService has warned streams and rivers may rise rapidly, with 20-30mm of rainfall expected per hour at its peak.

By Wednesday, a cold snap could bring heavy snow in the far south, with Fiordland, Southland and southern Otago all expecting snowfall below 100 metres overnight on Tuesday.

The fronts clear the country on Wednesday, leaving behind cold and showery southwesterlies for the remainder of the week. However, places that are sheltered from the southwest flow such as the Bay of Plenty and Nelson can expect a fine but cool end to the week.