Contractors will be out in force again today in Papatoetoe, where the ripple effects of a quick, devastating and deadly tornado on Saturday morning are still being felt. 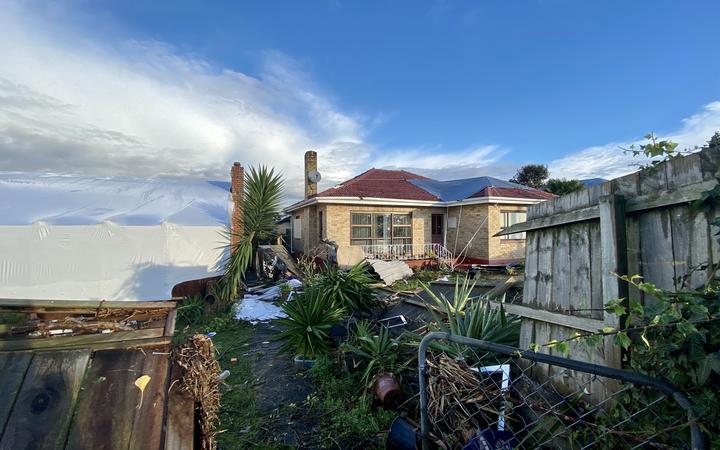 Many houses on Freyberg Avenue are patched up with tarpaulins Photo: RNZ/ Katie Todd

So far 62 houses have been deemed uninhabitable.

About 32 people remained out of their homes in emergency accommodation in motels overnight, while crews are still trying to restore power to homes on Freyberg Avenue.

The roof on Roy Roger's family home on Ballance Avenue is ripped up and windows are shattered - but he chose to sleep among the damage the past two nights, fearing it would be looted if he left.

He was struggling to comprehend how quickly the havoc played out on Saturday morning about 8.30.

"The windows were shaking, so I went to check the front door and the door just flew open... like it nearly came off the hinges. So I ran to my friends and got them to get under the table. I thought it was an earthquake," he said.

"Within the span of 30 seconds it was already gone. I opened the door, and just saw the devastation."

The area around Roger's home is dotted with bright tarpaulins, patching up most houses, while mounds of twisted metal, roof tiles, branches and guttering can be found outside homes.

There are shattered windows, toppled chimneys, power lines strewn across the footpath, and cars squashed flat. 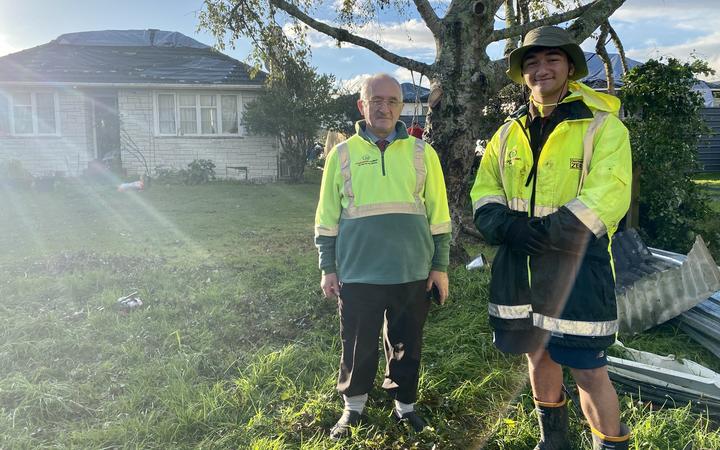 Roy Rogers and his son - also Roy Rogers - spent the weekend cleaning up after a tornado ripped through their neighbourhood Photo: RNZ/ Katie Todd

Rogers said the repair work ahead was more than he initially thought.

"It's... a lot more long term. We can clean all this up now, but with holes in the roof and with the rain, because it's winter, it's just going to carry on building up with droplets inside... so we're going to have to fix that."

When RNZ visited yesterday, the Rogers were taking furniture and belongings out of the house, as they waited for power to be restored.

"We've got a massive freezer in the back so a lot of that's going to go to waste if we don't get it out and donated as soon as possible," he said. 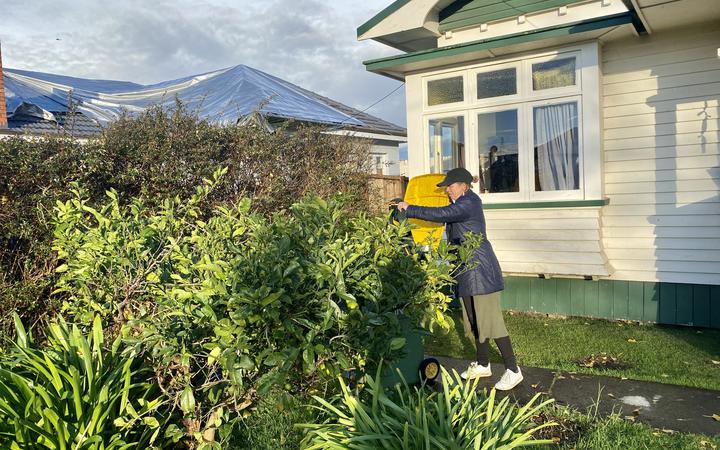 On Freyberg Avenue, which runs parallel, the tornado threw parts of Julie Wharton's carport into her son's bedroom.

He escaped harm by lying flat on the floor.

However Wharton considered her household fortunate in terms of the cleanup.

"Down the road, one of the ladies, you can see right into her lounge. So we're pretty lucky that we just got away with losing a few bits of wood here and there," she said.

Yesterday evening the street was a hive of activity, as contractors used cherry pickers to rebuild power lines, which they hope will be up and running in the next day or so. 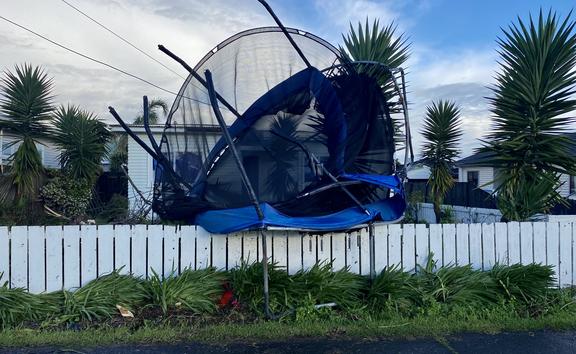 The tornado threw this trampoline on to a fence Photo: RNZ/ Katie Todd

Neighbours have been helping each other sweep up their yards and board up broken windows, while contractors have been trucking out debris and mulching tree branches.

Resident Warrick Right plucked bits of timber from his roof, from a house several doors down.

"Four-by-two, about a metre-long, sharp as a spear... and actually the garage at the back, there's one in that roof too. So [it was] that bad the stuff was flying around."

He was also helping remove ragged bits of wood from a neighbouring house belonging to Rosetta Fale.

She explained it was her "shattered" fence.

"The cool thing about this community is everyone's just helped, everywhere, whether you stayed in the street or not," she said. 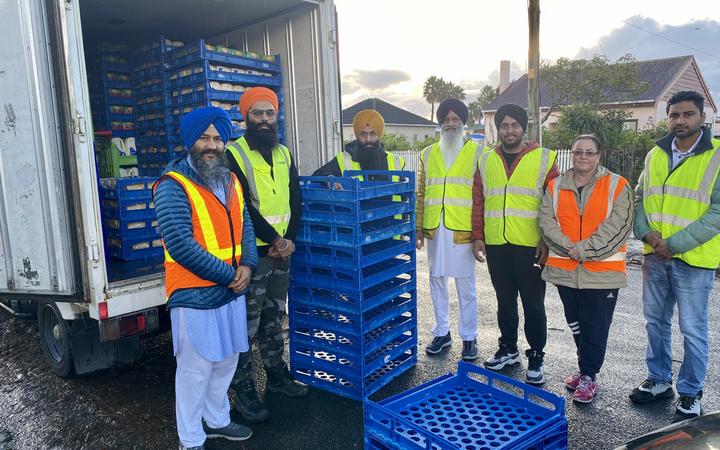 Volunteers were also walking up and down the street in hi-vis jackets, including Daljit Singh from the Supreme Sikh Society.

The society had delivered 1000 food parcels from its centre in Takanini to the most affected streets.

"We have about 50 volunteers now, covering all these streets to provide them with fresh milk, bread and hot food. So each house, we're knocking on the door and helping them."

Auckland Emergency Management said its teams will continue helping with the cleanup today, along with 15 Red Cross volunteers.

People who need help with accommodation, insurance or financial assistance can visit the Civil Defence Welfare Hub at Allan Brewster Leisure Centre from 9am.