Although rain is easing off in Mid and South Canterbury, it's unlikely some key roads including State Highway 1 will reopen today, Waka Kotahi says. 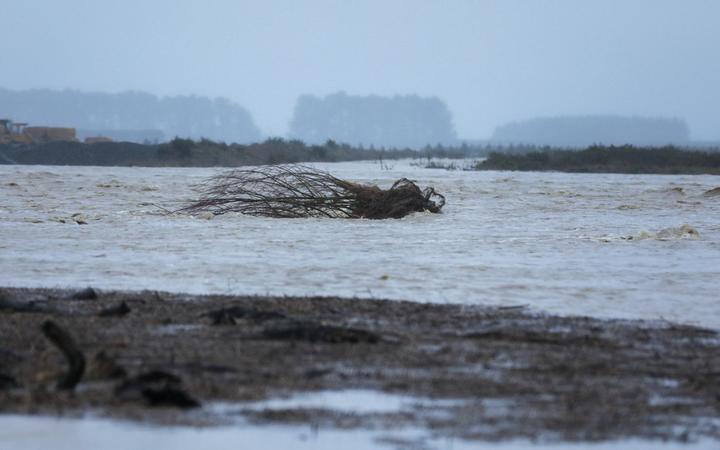 The flooded Selwyn River has spilled over the main highway at Dunsandel south of Christchurch. Photo: RNZ / Nate McKinnon

However, Selwyn / Waikirikiri river had caused deep flooding on SH1 at Dunsandel which meant the highway link south of Christchurch was among the roads unlikely to open today.

"In North Canterbury rain is continuing and we have a number of areas we need to assess, for example SH73, Porter's Pass to the West Coast, which will remain closed.

"Engineers are assessing the two Kowai River bridges and Porter River bridge approaches on SH73 today, and there is a lot of river shingle covering this highway which needs to be shifted before it can reopen.

"The Lewis Pass via Waipara, SH7, the other route linking Canterbury and the West Coast, is open."

She urged people to avoid travel in Canterbury today given the changing situation. People should check Waka Kotahi's South Island Facebook page before heading out, she said.

"Many local roads are also under water, so your local council's Facebook pages and Emergency Management pages are the best places to check."

A summary of closed highways in Canterbury as at lunchtime today:

People were urged not to drive through floodwaters even if they were subsiding as they could have hidden hazards.

The Timaru District Council Civil Defence said receding floodwaters could scour part of the road away, leaving holes behind.

Follow all the latest updates with RNZ's live blog

Clark said people should stay off the roads unless it was absolutely necessary.

Mid-Canterbury dairy farmer Brian Beeston whose business partner had to be rescued by helicopter yesterday said the floodwaters had created chaos.

He said yesterday morning his business partner was trying to shift stock when a raging torrent washed him a kilometre downstream.

He spent three hours clinging to a tree in the floodwaters before he was rescued and taken to hospital, where he was treated for hypothermia.

Beeston said they had lost stock in the floodwaters and it would be three or four days before they knew the full extent of the damage.