The number of Covid-19 vaccination doses in New Zealand should hit the half million mark in the next two weeks, Minister for the Covid-19 Response Chris Hipkins has revealed. 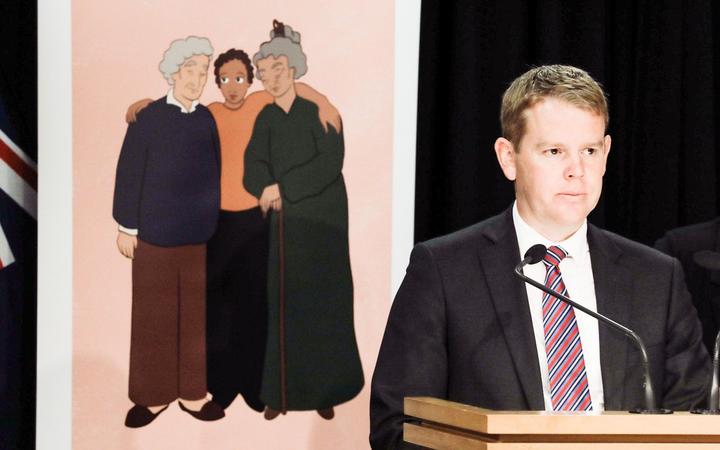 Hipkins has given an update on the vaccine at the Beehive Theatrette in Wellington.

Hipkins said that as of midnight, 388,877 doses of the vaccine had been administered, an increase of 83,000 on the same time last week.

He added that 120,000 of those people had received their second dose.

"Overall, we're tracking ahead of plan. Based on these statistics we're expecting to hit the half million mark within the next fortnight."

He acknowledged healthcare workers, vaccinators and district health boards (DHBs) for their efforts in the immunisation programme.

The national online booking system was heading through the trial well, Hipkins said, adding it would support and in some cases replace local existing booking systems as the programme scaled up.

"I know in these early stages there will be some teething troubles, there will be people who arrived to be vaccinated who might experience difficulties, particularly at some of those bigger centres where they are delivering vaccinations to thousands of people a day."

He emphasised that the priority was for eligible people who had already booked in an appointment to get the jab.

"Where people are walking in to get a vaccination, we still do expect that will be done broadly in line with the sequencing framework.

"So my message to people who are in group 4 - which will be the last group to get underway - please refrain from walking up to a vaccination clinic at this point."

Hipkins said walk-ins can be useful in instances where booked people did not show up to their appointment.

"We've seen some limited examples where there have been challenges. There was a story in the last 24 hours, which I think was very unfortunate of an elderly woman who was unable to get vaccinated despite having made an appointment."

He said the framework for when groups would get vaccinated aimed to help manage demand.

"The sequencing framework talks about when people can start getting vaccines, it doesn't guarantee they'll be able to get one exactly when they want to.

"We simply won't have the supply to give them to everybody all at once. We could've had a more granular system, but that would've been more complicated."

Group 3 is larger than the number of vaccines available through to the end of June, he said.

"So not everyone is going to get one straight away.

"The ultimate determinant of when we finish [vaccinations] is going to be availability of vaccines."

Hipkins said larger quantities of the vaccine supply were expected to arrive from July.

The vaccine stockpile was at 350,000 as of last night, Hipkins said. "The delivery schedule is not 100 percent locked down yet, but indications from Pfizer are that they're confident they'll be able to scale up for us."

He said some DHBs were adopting a locality-based approach and that was sensible and efficient.

Director-General of Health Dr Ashley Bloomfield said the number of trained vaccinators in New Zealand has been increasing, particularly over the past two weeks.

Medsafe was expecting more data from Pfizer from its trials of the vaccine on younger people at the end of this month, Bloomfield said.

"We're anticipating that may well be approved. So we're starting to plan and our DHBs are starting to plan for later in the year to add on that 12-15 age group to our wider rollout as they become eligible, if the evidence supports that."

Bloomfield was asked about the recent report from the Centre for Adverse Reactions Monitoring about two vaccinated people who died recently, but their deaths were not linked to the vaccine.

"This is good practice that any death that occurs within a period after vaccination. So in this case, these deaths had just been reported to CARM, and of course in a situation like that where there's grieving families it's good the report has been made, but we'd want to wait until the medical assessors have had a chance to look at those deaths and determine if there was any likely to the vaccine.

"In fact, there's now been a total of three such deaths in older people, within a period of a few days or slightly longer after vaccination. They've all been looked at by the medical assessors and their assessment concurs with hose of the clinicians who were treating the people, that their deaths were not related to the vaccine."

The vaccine stockpile was at 350,000 as of last night, Hipkins said. "The delivery schedule is not 100 percent locked down yet, but indications from Pfizer are that they're confident they'll be able to scale up for us."

Some experienced vaccinators are getting up to seven doses out of a single vial of the vaccine, Bloomfield said.

Yesterday Bloomfield told Nine to Noon older people and those with pre-existing conditions were becoming the focus of the vaccination campaign.

Bloomfield said DHBs had been told which underlying health conditions would mean people should get an earlier vaccination.

An initial list was based on the conditions used to be eligible for the free annual flu vaccination, he said. The list was then updated and extended weeks ago with overseas evidence about underlying conditions.

It would be further updated this week, and was available on the ministry's website, he said.