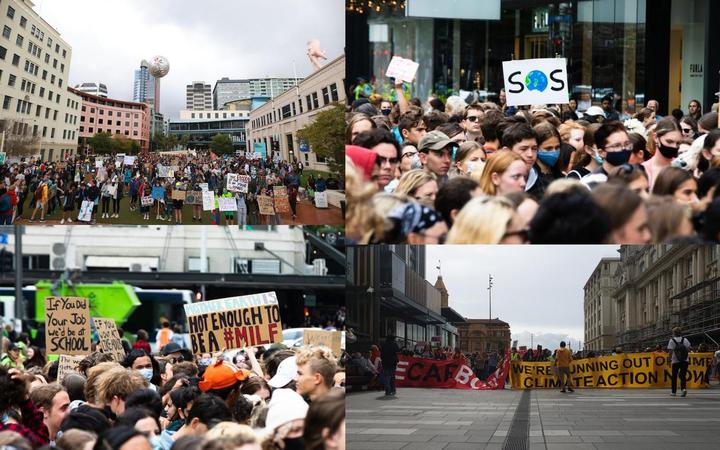 In Christchurch, a mix of students and older protesters shouted down mayor Lianne Dalziel after her response to their demands.

They marched from Cathedral Square to the Civic building with local demands including investment into green and free public transport, greater emphasis on climate education, and to stop development of the Tarras airport.

Dalziel told the crowd the demands are important, and change "requires work from everyone". As she said change was needed, there were calls of "what are you going to do" from the crowd.

The mayor said young people should make submissions to Environment Canterbury (the regional council)'s long term plan, and the crowd began shouting her down.

Dalziel said she would meet with protest leaders over their demands, but would not go into details with the crowd. One organiser made an emotional and hoarse plea for the mayor to make the right choice.

In Auckland, more than 1000 students marched up Queen Street chanting: "Hey, hey. Ho, ho. Climate change has got to go."

Most of the crowd were students and many held placards demanding a change in attitudes to stop global warming.

Marist College Year 13 student Maddie Atkinson says she wants to show her school how important it is to use her voice.

"This is a big issue, like, climate change you know it's taking over our world and even though in New Zealand we aren't really feeling a lot of the impact, like the brunt of what it's doing to our world, there are so many people in lower economically developed countries that aren't able to make change.

"But with us doing something, with us changing, you know, we can speak up for them."

In Wellington, about 4000 students listened to speakers in an open mic session outside Parliament.

Climate Change Minster James Shaw met with the students, who marched from Civic Square to the steps of Parliament, and received a list of demands calling for government action on climate change.

They urged Shaw to make sure the transition to a zero carbon economy was done in a just and equitable way.