Prime Minister Jacinda Ardern is urging Aucklanders to support each other to follow lockdown rules as more details were revealed about how the latest cases are connected to earlier cases. 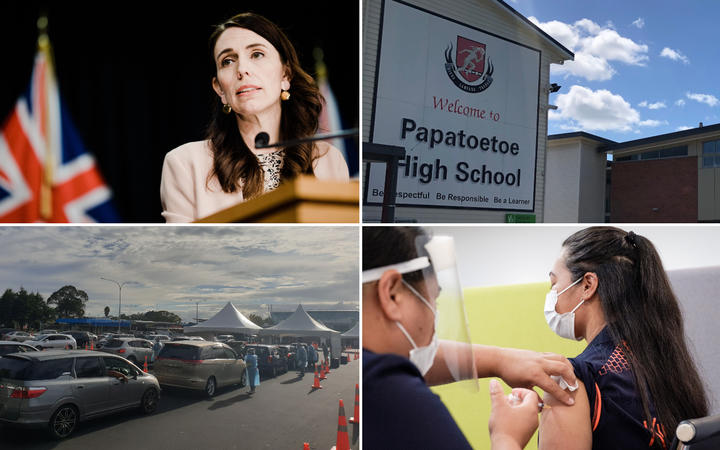 Auckland entered level 3 lockdown yesterday for the second time this year, less than two weeks after the last three-day lockdown in mid-February.

Ardern announced the alert level changes on Saturday night after a 21-year-old man tested positive earlier that day. He had attended classes at Manukau Institute of Technology (MIT) and visited a number of other locations while potentially infectious.

While no new cases in the community were reported today, Ardern and Director-General of Health Ashley Bloomfield revealed how case N and her son, case M, are connected to a family who tested positive for Covid-19 in mid-February.

It was revealed today that case N went for a walk with case F on the morning of 15 February, the day after Auckland last went into lockdown. Both families have students who attend Papatoetoe High School.

The contact between the two families was not disclosed to contact tracers prior to the family entering quarantine. 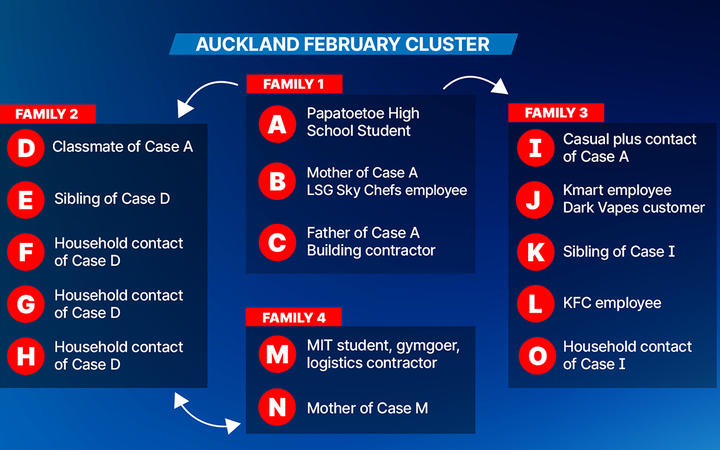 A graph showing the connection between the cases in the Auckland February cluster Photo: RNZ/ Vinay Ranchhod

She could not say why the first family did not disclose the contact, whether it was for fear that it occurred during level 3 or lack of memory.

Deputy Prime Minister Grant Robertson told Checkpoint he did not believe case M and N's actions were defiant or ideological. He has not seen any evidence they were deliberately ignoring rules and said they had been co-operative.

Speaking at her post-Cabinet briefing this afternoon, Ardern urged New Zealanders to encourage each other to follow the alert level rules.

"Rule breaking can prolong that plan, so that is why I'm asking everyone now more than ever to continue to back and support one another and if that means calling a family member or colleague out for not following the rules then we should do that. Do it with kindness, but do it."

She said it was not an instruction to go tell authorities about rule breaking, or for people to do something they were uncomfortable with, but to confront people directly.

"Go and talk to your friend or colleague, if they're sick tell them to go home... I think we should all encourage one another to follow the rules."

Ardern said the contact between cases F and N was a clear breach and was not tolerable, but it was up to police to decide whether to prosecute.

She said those rule breakers were already facing the consequence of having the full judgment of the country.

Vaccines to be extended beyond border, MIQ workers

Border and managed isolation and quarantine (MIQ) workers have been receiving their vaccines, and now it will be extended to other people in their households.

It's expected about 50,000 people will start to be vaccinated from later this week.

The next group after border workers and their households to be vaccinated will be front-line non-border health workers, Ardern said. 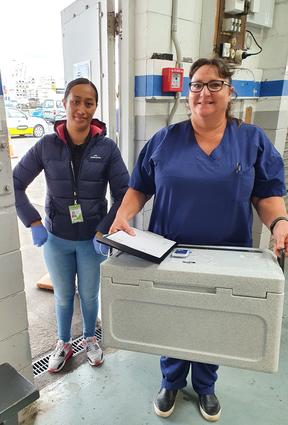 They include GPs, nurses, GP clinic receptionists and ambulance officers. About 57,000 people fall into this category and they will start to be vaccinated later this month.

Ardern said early evidence appeared very promising in terms of the vaccine's ability to protect individuals and reduce its transmission, so New Zealanders were already "better off" as the vaccine roll-out was underway.

"So as a reminder, one year on from New Zealand's first Covid case, that in relation to the rest of the world, we are also far better off, but for now, today and this week, we need to push on, do what we've done so well, squash this outbreak, get back to normal life, with zero complacency, kindness and team work."

The government will provide another update on the vaccine roll-out on Wednesday.

MIT students told to self-isolate as institute calls for kindness

Bloomfield revealed there are 21 close contacts of case M, the MIT student who tested positive on Saturday. They include classmates and a teacher and must self-isolate for 14 days and be tested twice during that time.

There are also 21 casual-plus contacts, people who were in the student centre or cafe at the same time as case M. They are required to be tested, and isolate until they receive their results. 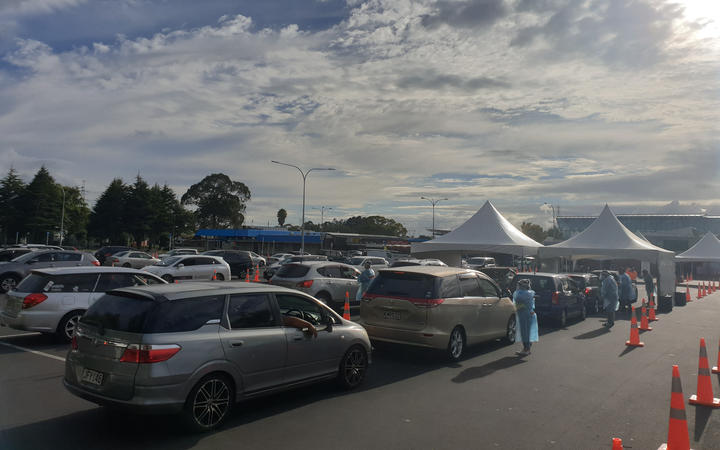 MIT student president Micah Sili said while it was understandable there was some frustration about case M's movements, it was important to be kind to each other.

"...He is just a student and his family so we need to be compassionate about their circumstances," Sili said.

"We just want to put that message out there to remember to be kind to everyone."

Many Auckland events planned for this week and weekend are being rescheduled or cancelled.

The Auckland Arts Festival was gearing up to celebrate its launch on Thursday, but today the organisers were busy rescheduling as many of the 70 shows in the programme as possible.

Auckland Pride Festival had already been postponed due to the last lockdown, and now organisers were scrambling to reschedule events for later in March and April.

This Saturday, more than 2300 athletes were due to converge on Queenstown for the annual Motatapu running and cycling event - but the event has been canned.

All of the international cricket and netball scheduled for this week will now be played in Wellington and Christchurch.