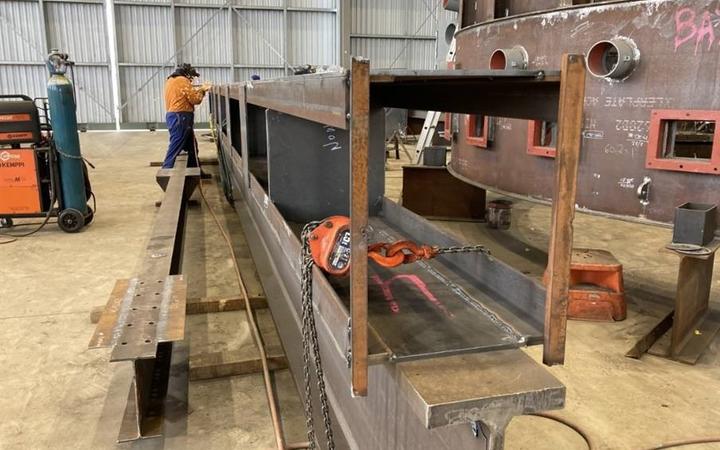 The new strut for the Auckland Harbour Bridge taking shape in a Whangarei workshop. It will be completed and transported by road to Auckland on Saturday. Photo: NZTA

Waka Kotahi says the 22.7 metre strut, which is being fabricated in Whangarei is being coated and painted today.

It says the focus will turn to bolting components together before being readied for transport to Auckland on Saturday morning.

"All going well and dependent on good weather conditions the new strut will then be installed on Saturday night.

Waka Kotahi said one southbound and one northbound lane over the bridge will close from 5pm on Saturday to prepare the site for work.

"Congestion is expected so people need to plan ahead and use the Western Ring Route as an alternative to SH1 and the bridge."

If weather disrupt the works, it will take place the following weekend.

"We're giving people plenty of warning that they won't be able to travel to the city centre over the bridge on Saturday night. We understand this will cause some inconvenience, but we need to close lanes to allow our engineers to safely carry out their work," Waka Kotahi general manager transport services, Brett Gliddon, said.

"If all goes well with the installation on Saturday night, further closures will be needed on other nights next week to carry out the all-important tensioning work."

"This involves jacking the new strut to the required level so that it is carrying load again, redistributing the load throughout the entire bridge structure. Only then can all the lanes be safely reopened."

"We are confident the work will be completed as planned on Saturday night, however due to the complex nature of the work and the fact that we are working next to live motorway traffic, there is a possibility that we may have to complete the work on the following weekend."

"We need to carry this work out during a weekend because the work will take longer than 12 hours, which would impact on commuter travel over the bridge if lanes need to remain closed."

While traffic from the North Shore was backed up this morning, Waka Kotahi said it was flowing over the bridge.

It was closed for just over an hour yesterday morning due to high winds.

"We understand the disruption closing the bridge causes, and these decisions are not taken lightly. Safety is Waka Kotahi NZ Transport Agency's top priority, and we will not take any chances with the bridge due to the current damage to the superstructure," Gliddon said.