Permanent repairs to Auckland's Harbour Bridge are expected to begin this weekend, closing all southbound lanes into the city over Saturday night. 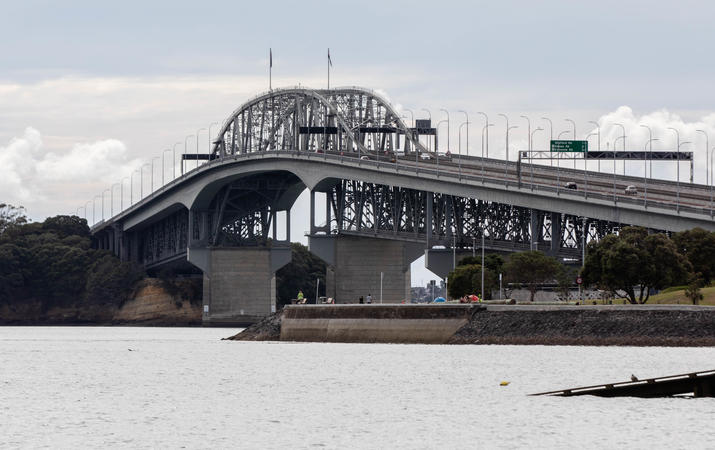 Waka Kotahi, the transport agency, said all going to plan, a new 22.7 metre strut will be installed on Saturday night.

Its general manager transport services, Brett Gliddon, said it is the first stage of the bridge's permanent repair and will involve bridge engineers removing the temporary bridge strut and replacing it with the new permanent strut.

"This is great news for Aucklanders, but it is just the first step of a multi-staged process to repair the Auckland Harbour Bridge, with several key checks and hurdles to be completed."

He said a timeframe for re-opening all eight lanes on the bridge is still not known.

The agency will close all southbound lanes of the Auckland Harbour Bridge into the city from 9pm Saturday until mid-morning on Sunday, from Takapuna's Esmonde Road.

One lane in either direction over the bridge will also close from 5pm - 9pm on Saturday to prepare the site.

Waka Kotahi is advising people to follow the sign-posted detour routes and allow extra travel time from the North Shore to the city centre.

Gliddon said the second and most challenging stage of work will happen off-site, and involves in-depth calculations to confirm what's required to put tension back into the bridge.

"Engineers need to reinstate the load carrying capacity of the bridge, which will involve it being jacked to the required level so tension can be re-distributed throughout the structure allowing all lanes to re-open with the new bridge strut in place. This jacking process is another complex procedure which will require another overnight closure," he said.

"We're extremely pleased with the progress to get us to this point, we know the lane closures on the harbour bridge are causing frustration and we're working as hard as we can to reopen the bridge as soon as possible."

He said the team had made faster than expected progress so far.

Wind speeds on the bridge have now reduced from earlier today when gusts reached 98 km/h, closing all lanes over the harbour bridge for just over an hour.

Ongoing wind gusts have been a concern since the weekend and Waka Kotahi's bridge team has been continually measuring wind levels.

It is vital we protect this critical piece of infrastructure for the medium and long term. If another incident were to occur because of high winds the bridge could be damaged even more which would cause longer term disruption.

The bridge and the clip-on lanes are safe to use, however since the superstructure was damaged due to high winds on 18 September, the bridge will remain compromised until a permanent repair can be made.

Double decker buses take around 330 return trips across the bridge each day but had to take a detour for a short time this morning due to severe gusts.

Auckland Transport said its double decker buses do not travel across the bridge when gusts are forecast above 100km/h.

It said tilt tests have shown Auckland's double deckers can sustain crosswinds of at least 130Km/h.