Boosting security at Hamilton's Covid-19 isolation hotels has become a reality with a pōwhiri for 57 defence force personnel in the city on Thursday. 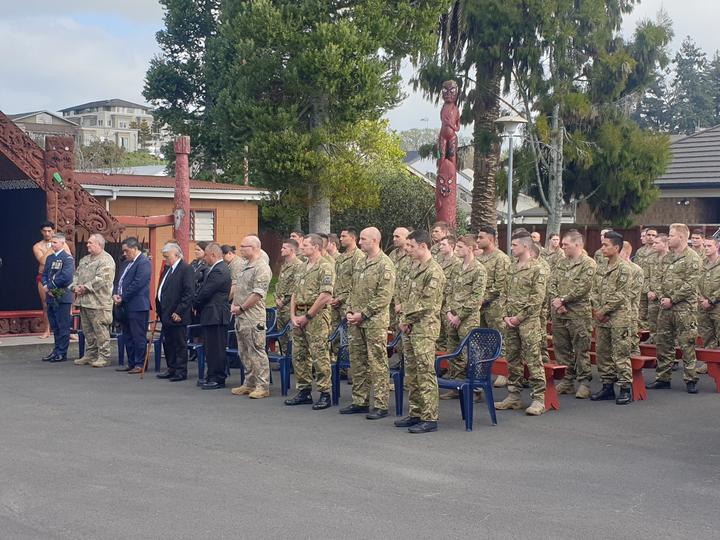 The additional staff will bring the total number of NZDF staff at the city's three quarantine hotels, the Ibis, Jet Park and Distinction Hotels to 74.

Waikato-Tainui joined locals to welcome the the group with a pōwhiri at Hui Te Rangiora Marae in the central city.

Head of managed isolation and quarantine security Air Commodore Darryn Webb said while there were no guarantees someone might get out, the extra staff would strengthen security and make it less likely.

''What we will do here is ensure we will have just the right amount of people fit for purpose for the risks that we observe. They are well trained, they come here a motivated, disciplined force. I have spoken to them many times in the past and they are all looking forward to the experience.''

He said support from iwi made both the military deployment and the care of isolated people much easier.

''The wellbeing and security of all those involved, New Zealanders in general is paramount and they have been strong advocates of that. Karakia at the start of people's journeys, farewelling them after 14 days. So that is a really important part of the overall process.''

"Kiingi Tuheitia has granted his tautoko and support on that basis. The well-being of all people must be at the forefront of our decision making in the battle against Covid-19. As leaders, we must work with others for the common good.

"We have members of our iwi working alongside defence, health and hotel managers as well as security and police to deliver great manaakitanga to our returnees in a distinctly Waikato way. Our kaupapa is very clear," she said.

The officer in charge of the defence contingent, Major Stephanie Craw, said the work while not hard, is different for her team.

''We train our people to solve complex problems.''

She smiled and laughed when asked if they were volunteers.

Megan Main, deputy chief executive for managed isolation for the Ministry for Business, Innovation and Employment, said continuous improvement is the mantra for all isolation hotels.

''We've got 7000 people coming back a fortnight so we improve on the go, so sort of fly it as we continue to refine it.''

Main said people coming into the country did not have a choice where they would be sent to isolate for 14 days.

Waikato District Mayor Allan Sanson welcomed the upgrading of security at the three hotels being used for quarantine in Hamilton.

He said having more defence personnel gave him more confidence in the security.

"Army and police are probably more trained at surveillance and things like that, where maybe (private) security not as much, so to actually have the armed forces there does give me more confidence that they are doing it.''

Air Commodore Webb said his staff will join police and private security as an integrated team at the isolation hotels.

So far 50,000 people have passed through a quarantine hotel in New Zealand, with 1000 of them spending their 14-day isolation in Hamilton.