There's been a surge in the number of people returning to New Zealand from India who have tested positive for Covid-19. 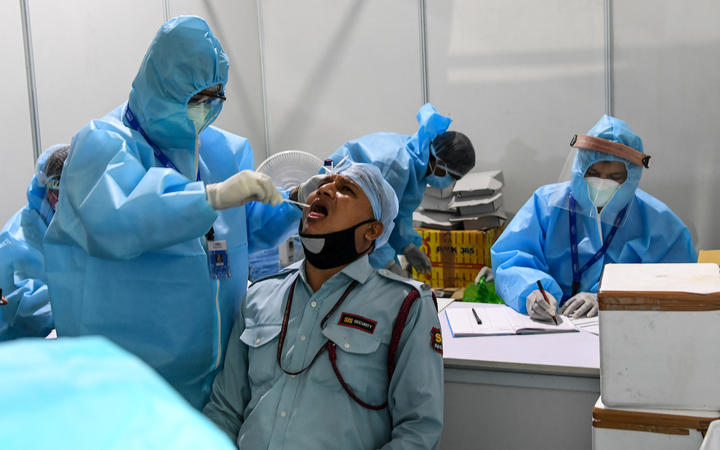 It comes at the same time India has overtaken Brazil to become the second worst-Covid hit country.

In the last fortnight, 26 people have tested positive after returning from India, 20 of them from one flight alone.

Travel to and from India was largely impossibly early in the global pandemic but a recent return of flights has contributed to a rise in the number of imported Covid cases here.

The flights landed in New Zealand on 23 and 27 August - landing in Christchurch with a stopover in Fiji.

Since their arrival, 26 people in managed isolation and quarantine have tested positive after they travelled from India.

Of these 20 are from the first flight six from the second.

These cases included people, particularly children, who had contracted the disease from other family members.

Six of the current cases in managed isolation and quarantine connected to India are children.

Economist and epidemiologist Ramanan Laxminarayan said, with the lockdown measures removed, Indian cases are on an upward trajectory.

"The low amounts of testing are no longer a problem just for counting cases, because no one is really keeping track of these reported infections.

"If you don't test, then people don't know that they are Covid-positive and then they are transmitting the infection to people and their families, and workplaces."

Dr Ramanan Laxminarayan said a lack of testing meant positive cases were likely being under-reported and the real tally could be 50 to 100 times more.

Rohit Sharma recently returned from India and told First Up all passengers had to return a negative result before boarding.

"All of us, no matter where we are living in India, we have to do quarantine in New Delhi in a designated hotel by Fiji High Commission.

"In that hotel we had a Covid test on day 3 - We can only board that flight if we have a negative Covid test."

Sharma said they also spent two weeks in quarantine in New Delhi before flying out.

His flight transited through Fiji, causing a scare in the Pacific nation.

But Fiji's secretary of health James Fong said there was no threat to the community because the Christchurch-bound passengers did not leave the terminal in Nadi.

"We noted that several recent cases confirmed at the New Zealand border in Christchurch to have transited through Fiji while travelling from India.

"We want to assure the public that these individuals did not contact nor did they transmit the virus while in Fiji.

"They landed in Fiji, they spent 30 minutes in the Nadi Airport transit area, interacted with no one and then they transited to New Zealand," he said.

Since 28 August, five recent travellers have tested positive after arriving from places other than India.