Little Mucaad Ibrahim, the youngest victim from the Christchurch mosque attacks, used to run around his family's home pretending to be a police officer. 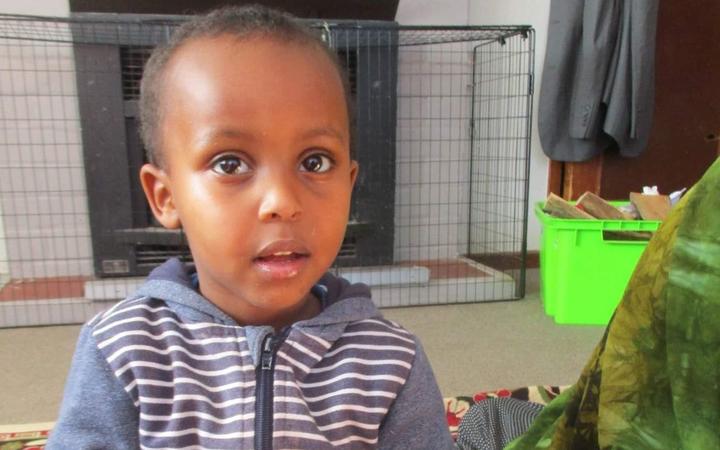 Mucaad Ibrahim was separated from his father and his older brother when the attack unfolded at Al Noor Mosque in Christchurch. Photo: Supplied

They thought the three-year-old might grow up to join the police.

But the little boy, adored by all who knew him, had his future stolen when the devil entered Al Noor Mosque on 15 March 2019.

Convicted terrorist Brenton Harrison Tarrant murdered 51 people on that day. The youngest among them was Mucaad.

The small child was clinging to his father's leg among a group of worshippers - some dead or badly injured - in the north-eastern corner of the mosque's main prayer room.

The young boy's age and stature made no difference to the terrorist.

He took deliberate aim at the little boy and fired two shots.

The family emigrated from Somalia in 1995 as refugees.

They were all New Zealand citizens and little Mucaad was born here.

"You killed my son, but to me it is as if you have killed the whole of New Zealand," his father, Aden Diriye, said.

"He was adored by all and loved by any who gazed upon him.

"He used to engage in play with the police. At home he used to run around the house and pretend to be a cop and wear the police uniform. We thought one day he would become a cop."

He could not understand the killer's callous hatred, Mr Diriye said.

"I don't know you. I never hurt you, your mother, your father or any of your friends. Rather I'm the kind of person who would help you with anything," he said.

He told the terrorist he had united the country in grief.

"It has united our Christchurch community, strengthened our faith, raised the honour of our peaceful community and brought our nation closer together," Mr Diriye said.

"Know that true justice is waiting for you in the next life and that it will be far more severe.

"I will never forgive you for what you have done."

She had never met her youngest brother in person.

She recalled to the court the last video call she had with him, only weeks before the attack.

"I promised I would come and meet him for the first time. As it turns out, I didn't get to fulfill my promise to him," she said.

"When I first heard the news. I was numb. I was shaking.

"I had a flashback to my video call when I had promised I would come and meet him soon."

When she made the trip to Christchurch she visited his grave, instead of the little boy she was meant to meet.

"I spent three hours standing in front of my brother's grave talking, praying, crying and asking Allah to unite us in the next life."

Despite all the terrorist had taken from the family, Ms Ibrahim forgave him.

"I believe for the sake of Allah that I do forgive this man and hope he seeks the right path," she said.