Dozens of victims have now recalled the day "the devil" visited their places of worship. 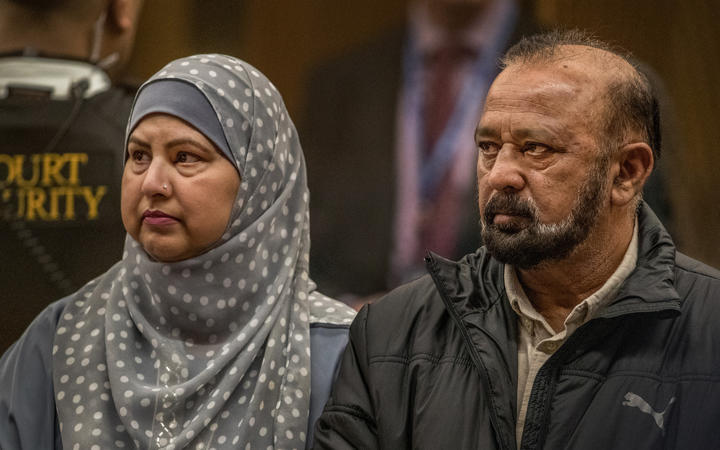 Brenton Harrison Tarrant is facing sentence at the High Court in Christchurch for the murder of 51 worshippers at two Christchurch mosques on 15 March 2019.

As well as the murders, he has pleaded guilty to 40 charges of attempted murder and one charge of terrorism.

The second day of the hearing was filled with a further 32 victim impact statements.

The convicted terrorist has sat mostly impassive in the dock for the past two days apart from brief cracks showing through his stony, cold facade.

Al Noor Mosque survivor Mirwais Waziri drew applause from the public gallery when he told Tarrant he had lifted a burden from him.

"In this whole time, 17 years, since I was living in New Zealand ... people were calling me - because I was from Afghanistan - they were calling me - for fun, or a joke, or intentionally - a terrorist," he said. 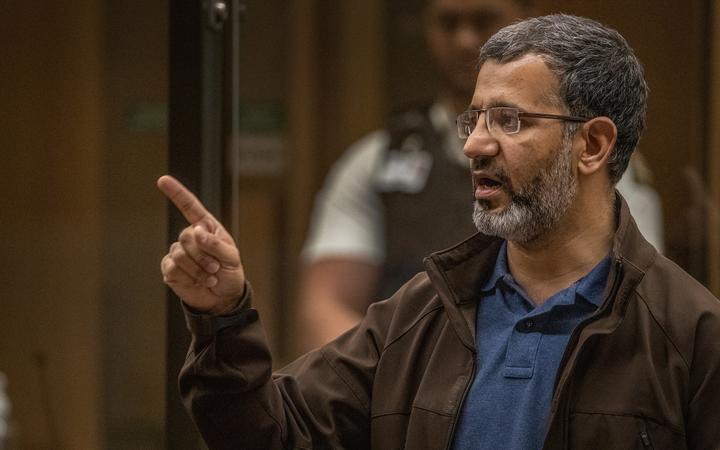 "Today you are called a terrorist and you proved to the world that I was not and us, as Muslims, were not.

"The terrorist does not have religion, race or colour. Any colour, any race and any faith could be a terrorist. We are not terrorists.

"We have suffered but we are strong."

Waziri decided not to read his prepared victim impact statement as he did not see any remorse or contrition in Tarrant's face as the summary of facts was read in court yesterday.

Mohammad Siddiqui will never forget the day "the devil" entered Al Noor Mosque. Siddiqui, who was shot in the arm, spoke at the sentencing this morning and said the attack had devastated his family.

"I walked to the mosque for prayers and went towards the left-hand side of the hall and it must have been only five minutes - the devil arrived.

"Yes I will call him a devil because you entered into the house of God with evil intentions - to kill Muslim people."

He said his daughter still feared being killed when she goes to the mosque.

The court also heard from Wasseim Sati Ali Daragmih, who was injured in the attack.

"Good afternoon everyone - except you," Daragmih said pointing at Tarrant.

The remark elicited a smile from the terrorist.

"Thankfully we have survived because you don't know how to use a gun except from a zero point.

"You think your actions have destroyed our community and shaken our faith, but you have not succeeded.

"You have made us come together with more determination and strength. 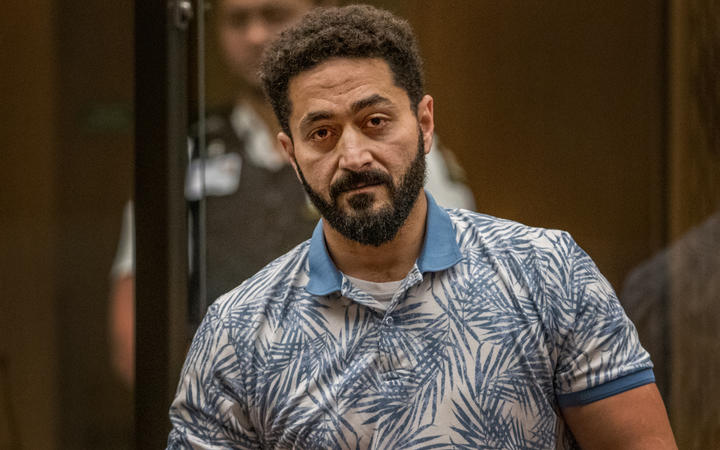 He addressed Tarrant several times during his short address.

"Your heart has led you to such a lonely and miserable place where you deserve to go," Daragmih said.

"I actually come today ... just to enjoy and laugh that you are sitting in the dock and me enjoying my freedom and that's where you deserve to be."

The convicted terrorist nodded following the remark, as he did when Hazem Mohamed said his brother told him Tarrant deserved the death penalty.

'Read the Quran - it's beautiful'

Nathan Smith, who converted to Islam about nine years ago, said it was the best decision he had ever made.

"After you left Mosque Al Noor I was surrounded by the injured, the dying and the dead. I held a three-year-old boy in my arms praying he was alive - he was not. You took him away. He was three."

He offered his sympathy to Tarrant's parents and gave him some advice for his time in prison.

"When you get a free minute, which you'll have plenty of, maybe you should try to read the Quran - it's beautiful," he said. 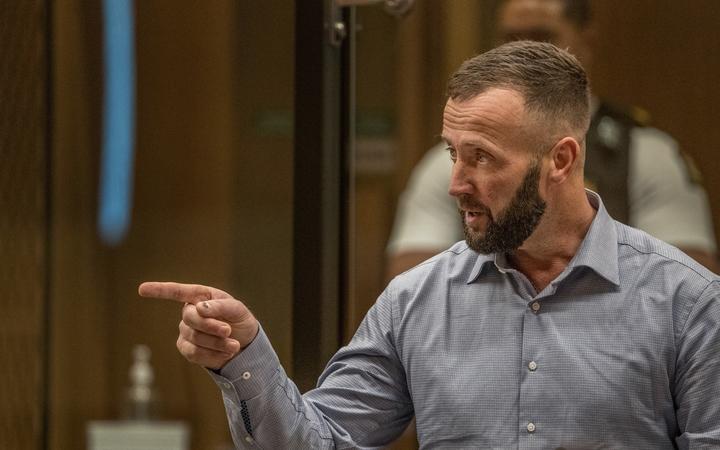 The court this morning heard from the family of Tariq Omar, who was slain at Al Noor Mosque.

His father told Tarrant he would never forgive him.

Rashid Omar recounted the pain he felt at learning of Tariq's death.

"I remember being there with my kids and hugging them and I started crying with them. As a dad I'm meant to be strong for my family and as a dad be invincible in their eyes," he said.

"I could not hold my emotion together to be strong for my family because I was hurting so much inside to hear that I had lost my baby Tariq this day.

"As a parent no matter how old your children are they will still be your baby forever."

Tarrant's guilty plea had brought some relief, but only briefly.

"I realised Tariq is still never going to walk back into my life," he said. 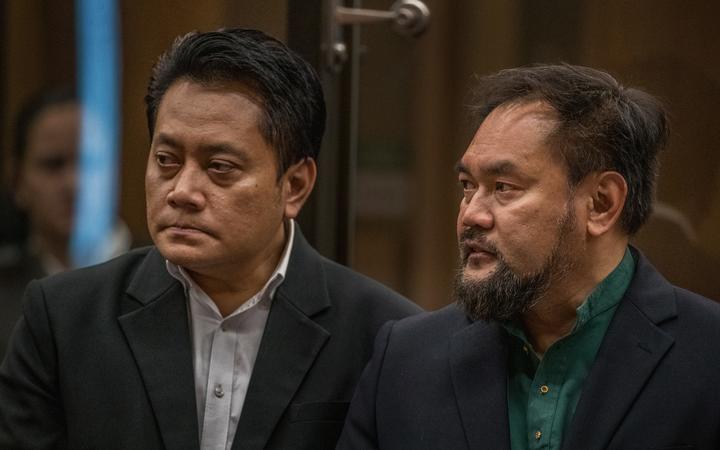 Rashid Omar says he will never hug his son, Tariq, again, and that causes him enormous pain. Photo: Stuff / Pool

He would never forgive Tarrant.

"In my religion I am taught about forgiveness if possible - it is not my job to judge anyone - not even you. I believe judgement is left in the hands of Allah and this time will come to you," Rashid Omar said.

"I see not only you have taken my son away from me and my family, but your family have also lost you. Your family can't enjoy life anymore because their life has changed as well.

"I know Allah is looking after Tariq. I know one day we will all be together again. For now this is how life will be for me, I will wait longingly to see Tariq again.

"I'd like to think you will find peace in yourself but I doubt peace will come to you. I will never be able to forgive you."

The court this morning also heard from Ibrahim Abdelhalim, the Imam at Linwood Islamic Centre.

Abdelhalim was leading Friday prayers when the convicted terrorist opened fire on the mosque.

"The gunfire was very fast and repetitive like a submachine gun," he said.

"It was a horrible time.

"We had nowhere to go as we were trapped inside the mosque with the defendant standing at the entrance.

"The defendant stopped firing and I saw all the people who had been shot. Some were injured and some were dead.

"I then focused on my family and found ... [his wife] Salwa who had been shot.

"I was in shock and thought this was a dark dream.

"I couldn't believe what had just happened. I had lost many friends in those few minutes." 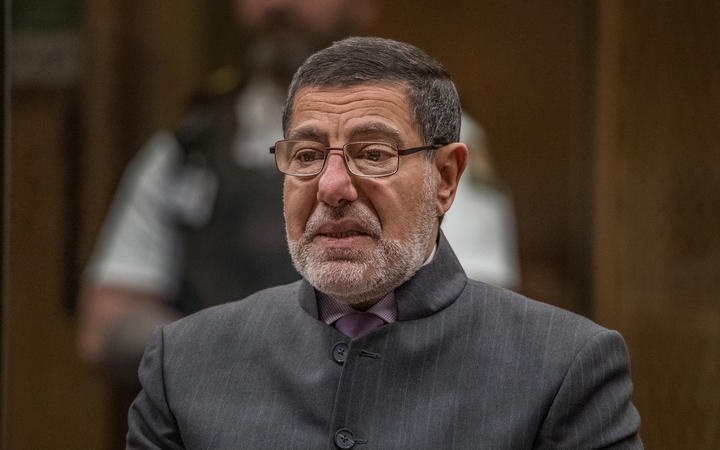 The sentencing will continue tomorrow with further victim impact statements before the Crown makes its submissions, followed by Tarrant himself.