While the reopening of Linwood's mosque was a painful memory for local Muslims, many gathered from near and far to hear how the attack unfolded. 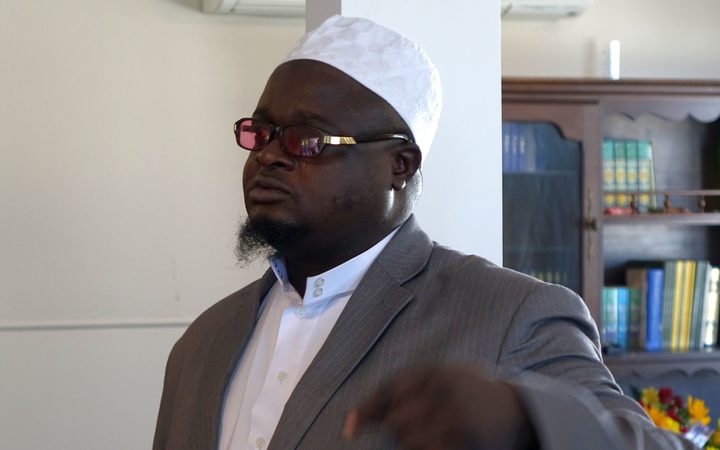 Alabi Lateef Zirullah has visited all the families of the people killed at his mosque. Photo: RNZ / Matt Chatterton

Al-Noor Mosque had reopened a day prior on 23 March, and many members of the public as well as Muslims and officials went in - but no filming was allowed on the day.

Imam Alabi Lateef had planned to open Linwood mosque for the maghreb (evening) prayers the next day, but after several people had asked he decided to open it for the afternoon prayers.

When word began to spread, families and relatives of those killed in the both attacks began to gather in the mosque last Sunday.

Media filmed and people listened to Imam Lateef as he walked every corner of the mosque, recounting the causalities, recalling how the shooting happened, and how Abdul Aziz came to the rescue.

One woman sobbed as she listened to how her relative was killed and asked where he last stood in the mosque.

Soon, Imam Lateef proceeded to made the call to prayer (adhan) - the first at Linwood mosque since the attacks.

After the prayers, Muslims opened their palms side-by-side and made a dua'a (invocation) for mercy - even for the person responsible for the attacks.

"We are muslim, we cannot deny that. It's difficult to say but ... Allah forgives everything, every sin. It's up to Allah [to forgive]," Imam Lateef said.

"But from our heart as a Muslim, for everything we forgive him and I hope he will repent sincerely to gain the forgiveness of Allah."

Speaking to RNZ after the prayer, Imam Lateef said he could not bear to talk about what happened again.

"That's very difficult, that's why I don't want to repeat it. It's very painful.

"The first casualty, the brother brought his mother and father - he was just parking here," he said, pointing out from the side window sill of the mosque, where an empty lot now stood.

"His mother and father got killed here - those were the first three casualties [of Linwood mosque]."

He said he had first seen the shooter from the front window, and ducked carefully to the side window to see what was happening.

"I believe if he saw me, I would be the fourth [casualty]. But he didn't see me, because he was shooting straight away."

Mr Aziz came in later and joined the afternoon prayers and many came up to him to shake his hand.

He said there would have been more casualties if the shooter had managed to get more guns or if those at the mosque started leaving after prayers.

"Everything is [determined] from Allah."

Mr Aziz said he "could see the fear in [the shooter's] eyes."

"He was a coward, you know, for himself he had a bulletproof vest and everything and he come with a gun and killing other people ... he didn't want to die himself but he killed other people."

He said he would have been happy to sacrifice his life to save other people.

"This brother and sister, they're praying in the house of Allah, their life is not more important than my life.

"I would have been happy to sacrifice my life for them, not just in the masjid but anywhere, to see other innocent people killed for nothing, our life is not more important than their life.

"Especially when we are here, we are all like a family. Those people who became shaheed [martyrs] and those who were injured, we feel like we lost a part of our family."