A Hamilton family whose two young boys were killed when a trucker who had been at the wheel too long rear-ended their car, accuses agencies of failing to fight for justice or protect road safety.

The driver John Barber, his colleague in another truck and their employer, Dynes Transport of Tapanui, were convicted of road transport charges after a police investigation.

But state workplace regulator WorkSafe has twice declined to lay health and safety charges against the company, which it can do when fatalities occur in work-related road smashes.

"I just feel terribly down. Angry, sad," Dr Sharifi said in her home near Gordonton.

"What they were able to do was not enough.

"It was not enough to bring up the whole truth of this crash, all the facts about this crash and actually fight for what was the real case." 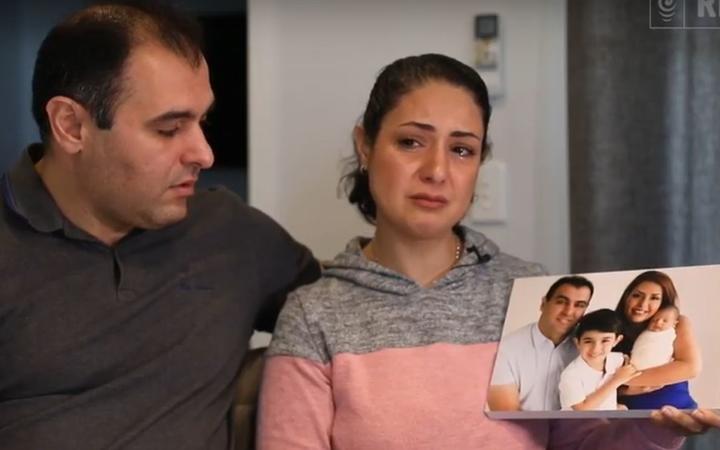 A family picture showing Sia Mosaferi and Mohy Sharifi with their sons Arteen, 4, and Radeen who was just 10 weeks old when he died. Photo: Screenshot / RNZ

Both the police and particularly WorkSafe had wanted a simple case they were assured of winning in court, gave up when it was hard, and the casualty was justice for their boys, and safety for the travelling public, Dr Sharifi said.

"We are the victims here and now.

"But ... these drivers are out there, doing the same culture of driving. They're driving fatigued, they're driving illegal hours, they're not taking their rests.

"So every day there could be a tragedy like this happening and WorkSafe is well aware of it."

Barber's nine-axle double-tanker Kenworth hit the family's Toyota at 79km/h when cars in front slowed, about 30km south of Turangi on a straight stretch of road.

He was "following too close to be able to stop short," the Rotorua coroner found.

The family speak of Barber tailgating them. 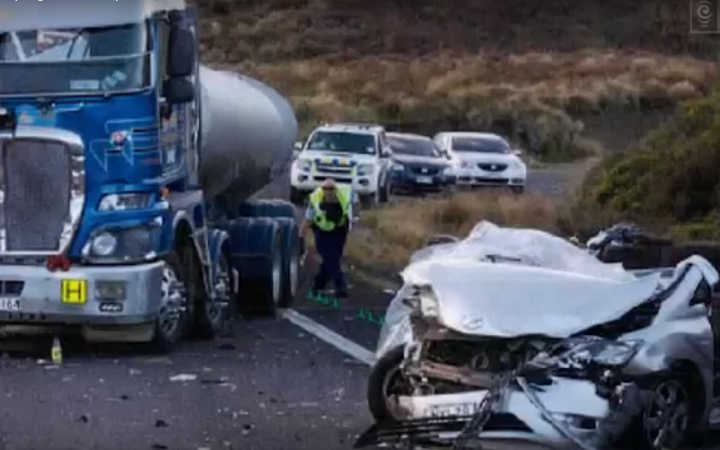 The crash scene after a Kenworth double-tanker rear-ended the Hamilton couple's car on the Desert Road at Easter 2018. Photo: Screenshot / RNZ

A second Dynes truck, in front of their Toyota, swerved into the oncoming lane - to avoid the slowing cars. Nothing was coming and that driver, Trevor Hall, was convicted of careless driving.

Police investigators found that both truckers had broken the limits by working too long that day already, and also on multiple occasions in the days leading up to the crash.

The monitoring camera in Barber's cab was covered with tape; the exterior camera suffered an unexplained outage just before the crash.

Dynes Transport could have monitored the drivers in real-time with the cameras; but it was not doing this.

Instead it was relying on manual log entries and weekly reports-back about what hours they drove.

Dynes declined to be interviewed by RNZ.

The coroner investigating the deaths said there had been breaches of the the health and safety laws strengthened in 2015-16.

In August 2019 he stepped in, giving WorkSafe an extra six months to prosecute Dynes.

"There are a number of prior convictions for having fatigued drivers and logbook offences with the company," the coroner noted.

WorkSafe told the coroner its investigation was full and thorough.

The investigation report shows components of both trucks-trailers - Barber's and Hall's - were not up to Certificate of Fitness standard. The police said the defects did not contribute to the crash. Nevertheless, operators are required to keep vehicles up to COF standard at all times.

In January, for a second and final time, the agency told the family it lacked the evidence to lay charges.

WorkSafe began its investigation nine months after the crash, and only after pressure from the family.

By that time it had just 10 weeks left before a 12-month deadline, set by law, to prosecute.

Its own internal rules give its investigators eight months to get evidence, leaving its lawyers four months to assess the case they have built.

Often this is not working.

An internal review RNZ obtained under the Official Information Act (OIA) spelled out how it was common for incomplete and late investigations to put pressure on lawyers; and a lawyer hired by WorkSafe confirmed investigations often came through half-baked.

Late though it was, the Sharifi-Mosaferi family got assurances in January 2019 from WorkSafe.

"We are totally committed to investigate this matter with the highest priority," investigations manager Bruce Greathead told them.

WorkSafe promised full disclosure but only ever released a redacted summary of their investigation.

The agency had earlier told the family it had not begun an inquiry itself because the police had better skills, experience and resources to do that at a road crash.

What the police lacked, however, was health and safety powers.

This bureaucratic bungle persisted for more than two years until October 2018.

Even since it was fixed, the police have not done many health and safety investigations; and an Official Information Act response shows WorkSafe keeps no record of how many cases it refers to police, or receives from them.

For the Desert Road crash inquiry, time was ticking:

The expert witness for WorkSafe on fatigue, Professor Philippa Gander, was forced instead to rely on logbooks and company records.

She concluded it was "highly likely" Barber was fatigued; at least, eight predictors of fatigue were present.

She could not be 100 percent certain, though.

Dr Sharifi said this was the main reason WorkSafe gave them for not prosecuting Dynes.

"And their response to me was if the driver had confessed that he had fallen asleep behind the wheel, that would be 100 percent.

"So I don't know what was the point of this whole investigation if we were just waiting for a confession from the driver."

Her memory was damaged in the crash, her career as an agricultural researcher ruined.

Siamak Mosaferi, a structural engineer, had idolised New Zealand when he emigrated from Iran.

"I came believing the justice system was the best," he said.

"I lost my trust in the justice system."

Police said they conducted a thorough investigation, as they do in all crashes.

"The range of charges demonstrates the attention paid to the aggravating factors," police said in a statement to RNZ.

Sia Mosaferi and Mark Hammond both said the charges available to police to lay were insufficiently wide, which was reflected in the penalties able to be imposed. The sentence imposed on the driver John Barber provoked several hundred outraged comments online in mid-2019.

The WorkSafe board member who the family approached in mid-2018 to ask for it to do its job, Paula Rose, said in a statement she and the board were satisfied the investigation met the operational standards they would expect.

WorkSafe, in a statement, told RNZ the timing of the investigation "had no impact".

"I stand by the professionalism of the investigation and its outcome," its head of Specialist Interventions Simon Humphries said.

WorkSafe in internal documents a few months ago described its own investigations and intervention approaches as "outdated" and reliant on old technology, and laid out a programme to fix them.

The family and their lawyer Mark Hammond appealed to MPs, to the Associate Minister of Transport Julie Anne Genter, and they met with the Justice Minister Andrew Little in mid-2019.

"In my years of experience I am yet to confront a more concerning and sadder case," Hammond said in an email.

He has called on Little to involve the Crown Solicitor in cases as serious as this, "from the outset".

He had earlier pleaded with WorkSafe to prosecute, saying too much stress was being put on fatigue, when it was just one symptom of flawed supervision by companies of their long-haul truckers.

Investigators noted a comment to police by driver Trevor Hall, when asked why he had failed to have a 10-hour break, said "one of his supervisors has said that he had to have the load of wine to [the client] in time".

The two tanker-trucks had carried wine to Auckland from the South Island and were returning empty.

A summary of Dynes' truck movements on this run in the week before the crash found "reasonably serious breaches" of driver break times on 14 out of 21 runs, or two-thirds.

Gander, however, had praised the company's fatigue policies and handbook, and said it appeared to proactively manage fatigue - though the driver, Barber, had not read these documents.

The judge at Dynes' sentencing in July 2019 echoed Gander.

Judge John Brandts-Giesen said he was satisfied the company had invested in making its safety systems work.

He noted, though, it was a manual system and "well-paid and trusted truck drivers falsified their time sheets".

The company "did not cause this terrible accident", he said.

NZ Transport Agency told WorkSafe Dynes was not an 'at risk' company and was deemed more compliant than average. NZTA's own regulatory arm was in turmoil at this time.

Andrew Little wrote to then Workplace Safety Minister Iain Lees-Galloway, who replied that the case had not met WorkSafe's evidential threshold to prosecute.

"I could see it in his face that he actually cared," Dr Sharifi said about meeting Little.

Now Little is the new Workplace Minister "hopefully, hopefully, there's no 'too late' in the situation".

"So what that it's past the two years limit for the family to launch a private prosecution," she said.

They could not afford a $150,000 attempt anyway, and it would not bring their boys back; instead, what was needed was an audit and overhaul of WorkSafe.

WorkSafe made three recommendations from the investigation: