'It's made the pain all so much worse'

The mother of two boys who died after a horrific car crash last Easter says she is shocked and offended at the sentence handed down to the truck driver that killed them.

Sia Mosaferi and Mohy Sharifi were driving to Wellington on Good Friday last year when their car was hit by a truck after it failed to stop in a line of traffic on the Desert Road.

Their four-year-old son Arteen and his 10-week-old brother Radeen were in the back seat and both died.

The truck's driver, 71-year-old John Baptiste Barber, had failed to have the minimum rest period during the three days leading up to the crash.

There were also three charges relating to logbook breaches, and one of completing a false logbook entry.

He was sentenced to three months community detention, 150 hours of community work and disqualified from driving for 12 months.

Ms Sharifi said she was shocked and offended at how light his punishment was.

"In the past year we were dealing with the pain of two losses, the losses of the precious lives of our two beautiful boys," Ms Sharifi said. 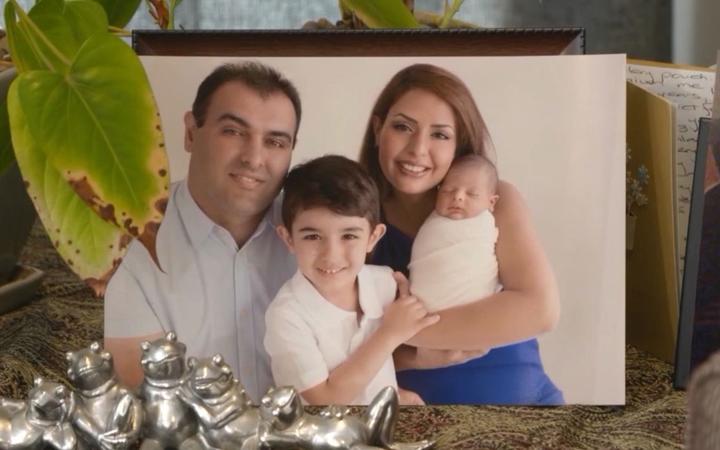 Sia Mosaferi and Mohy Sharifi with their sons Arteen, 4, and Radeen who was just 10 weeks old when he died. Photo: RNZ / Claire Eastham-Farrelly

"Today we are also facing two additional losses; the loss of the right of justice and the loss of trust in the New Zealand laws to protect ourselves or anyone else from such accidents happening again and again."

No outcome today would have brought my boys back, but I just feel insulted at how lightly this was taken and how lightly the lives of my boys was taken ... it's made the pain all so much worse, I'm hurting even more than even the judge couldn't see the depth of this situation."

Ms Sharifi said the judge presiding over the sentencing had not considered Barber had been fatigued in the crash, and gave him credit for pleading guilty, despite Barber never expressing any remorse for causing the two boys' deaths.

She said it gave her no confidence in the justice system and highlighted to her the reasons behind the high road toll.

"I can now understand why there are so many fatal accidents every day that we read about in the news - because no one is taking this seriously," she said.

"Not even the justice system is taking this seriously," she said.

"Today I felt not only that driver but also the justice system took the precious lives of our boys so terribly lightly."