An Auckland man has been sentenced to 12 months home detention for selling millions of eggs from caged hens as free range. 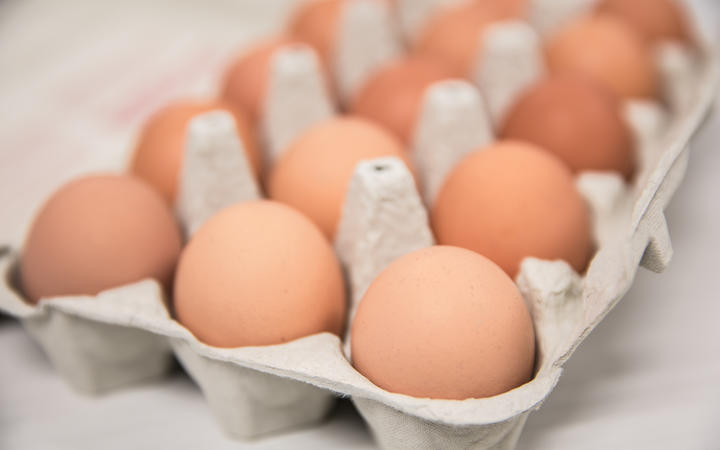 For two years - between 2015 to 2017 - Chen's company bought more than 3 million caged eggs from other suppliers, then packaged them in his own cartons labelled as free range, and sold them at higher prices.

In sentencing at Auckland District Court yesterday, Judge Field said it was "an easy matter to package eggs in a misleading way and there must be corresponding deterrence".

He said Chen's "motivation seems to be entirely financial" and that the offending could "discredit an entire industry in the minds of consumers when they can't be sure what they are buying is in fact the product."

Chen had earlier pleaded guilty to a representative charge brought by the Commerce Commission of obtaining by deception under the Crimes Act 1961.

The commission opened its investigation into Chen's business in June 2017 following a complaint from a former Gold Chick employee.

Surveillance showed regular purchases of eggs from a supplier known to solely produce caged eggs. A search warrant was executed in December 2017 and the evidence recovered included invoices from the caged eggs supplier and burnt remains of its packaging labels.

Chair of the commerce commission, Anna Rawlings, said the penalty was appropriate.

"This is a pretty serious case in that the claim that was being made that these eggs were free range just simply wasn't true and for that reason, we pursued disclaim as a Crimes Act charge and the penalty is consequently much more severe than would be available to us under the Fair Trading Act. That reflected the severity of the offending here."

Rawlings said it's important that consumers can rely on producers to provide them with truthful information.

"Clearly, this case reminds us that all businesses need to operate and advertise in a truthful way but, more generally, they also need to make sure that claims are clear and accurate and not misleading. A short message to businesses is if you can't back up what you had to say about your product then don't say it at all."

He said the Ministry for Primary Industries has improved its audit system in the last three years and his organisation also introduced an independently-audited tracing system.

"We've encouraged our farmers to stamp their eggs, so put like two letters explaining what systems - FR for free range for example. Each farm has a three-digit number. We have a website called Trace My Egg, customers can look at those two letters and the three numbers and find out which farm the egg came from," he said.

"We're certainly encouraging the supermarkets and other retail customers to only purchase stamped eggs because that gives them confidence. They don't want to be selling eggs that may have a problem. The rest of the industry doesn't want to be tainted by these behaviours or these people."

"There's no transparency or accountability in regards to egg-labling in New Zealand. It's impossible to visually tell the difference between caged and free range eggs, so the consumer is replying on the honesty of egg producers and suppliers. Some of them have made it clear that they can't be trusted."

She doubted the egg stamping and tracing system would work.

"It's a voluntary measure that can't actually stop egg suppliers from misleading the public. The easiest way to stop this kind of fraudulent bahaviour is banning the cage system all together."

The egg industry in New Zealand is phasing out conventional cages by the end of 2022 under an Animal Welfare Code, but Chambers said farmers will still be able to use colony cages which still don't give chickens enough space.

She said the country should move to cage-free system including barns and free range where hens can roam freely outdoors.

The Commerce Commission has prosecuted two cases relating to free range eggs in the past ten years.