While a national egg shortage could mean higher prices, it's unlikely the hot breakfast staple will disappear from supermarket shelves. 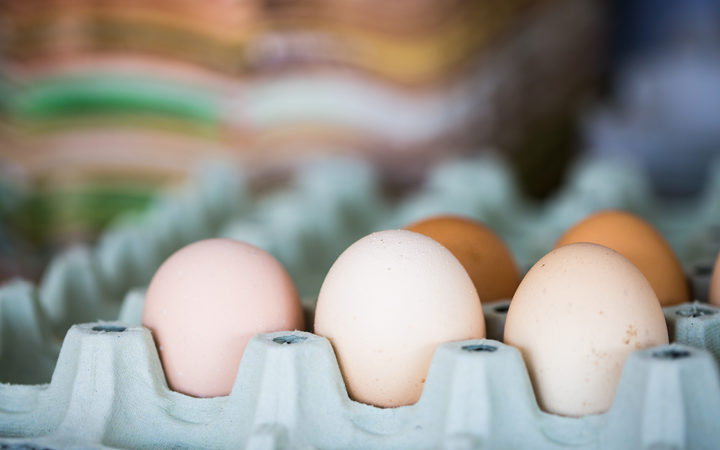 The number of laying hens nationally has dropped from 4.2 million at the end of last year, to 3.6 million.

"We're just going to see a lesser amount of eggs, and that will probably translate to some extent to price increases, just because of a shortage of supply," said Michael Brooks.

He said there were two main reasons for the drop.

In 2012 new rules were introduced to gradually phase out battery cages for hens in New Zealand by 2022. This meant a series of deadlines for farmers to incrementally give hens more space.

Poultry farmers faced significant costs to meet each stage of the new regulations and some had reduced flock sizes as they made infrastructure changes.

"There are costs in terms of new land, new farming systems, and a lot of farmers have really got some big and very costly decisions to make - and that's had an impact on supply, and that is part of the issue that's leading to this supply issue at the moment."

Slow resource consent processes had also held up many developments, and affected new-comers, he said.

The other factor is demand is up as Kiwis are eating more eggs.

Mr Brooks thinks this is partly because nutritionists have swung back in favour of recommending eggs, and partly because of a swing away from carbohydrate-rich and sugary breakfast cereals.

"We produce one billion eggs a year. We're big egg eaters, it's a cost effective form of protein, and New Zealanders like eggs," he said.

For now, Mr Brooks said the downward trend in the number of hens in the national flock had already turned upwards, and the flock had begun to grow again.

Hens take about five months to go from hatching to producing their own eggs, and he estimates the egg supply should be back to normal in about six months.

But he expects the shortage could be repeated in coming years, as farmers are more vulnerable while they work toward the final 2022 tightening of cage rules, and this would produce more noticeable ebbs and flows in flock numbers and supply.

A spokesperson for New World and Pak'n Save stores said they had not noticed an egg shortage.

But Countdown's head of perishables and deli foods, Nikhil Sawant, said their stores were reporting pressures on supplies of barn and free range eggs.

"New Zealanders are increasingly interested in social and environmental issues and this is influencing their purchasing. In the last three months we've seen a real surge in demand for barn and free range eggs.

"We're working closely with our egg farmers as we all adjust to this increased demand, but there are unfortunately going to be shortages from time to time. We're trying our best to keep shortages to a minimum and are expecting supply to improve in the coming few months," said Nikhil Sawant.

About 30 percent of eggs sold in New Zealand were cage free, and demand had been noticeably increasing for some time, Mr Higgins said.

"There's some areas which are more pro-animal welfare than others, like Wellington - where there's always been a higher percentage of cage-free eggs in supermarkets, and parts of Auckland and parts of Christchurch.

"Whereas some of the provincial towns are still more engaged with caged eggs. Although the Countdown stores are now pushing more and more into cage-free in provincial towns."

As more farmers either moved to cage-free poultry farming, or kept up with the changes to caging regulations, eggs would get dearer, he said.

"We cannot produce eggs for the same price. We can't."

Mr Higgins believed cage-free was the right move ethically, and said regulations were the only way to make that happen. But he also sympathises with farmers facing huge costs to make changes as the regulations become tighter.

"It can't be done just overnight. Many farmers are going as fast as they can to gear their farms up to produce more non-cage product."

Some were choosing to wind businesses up, or retire, rather than finance the changes to meet the regulations, he said.

"But for us to not make those changes, we're being naive, and not keeping up with public demand."