Louisa Akavi - the New Zealand Red Cross nurse taken by Islamic State likely went by a different name and had her face covered during her captivity, so people who met her may have had no idea who she was, a journalist in Syria says. 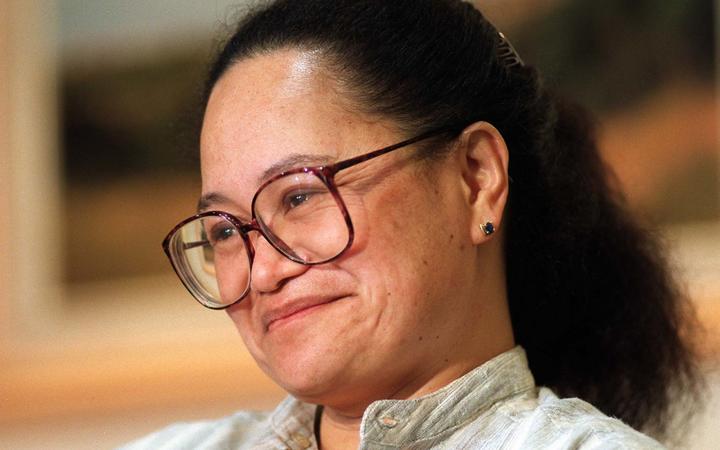 The International Committee of the Red Cross (ICRC) yesterday revealed that Ms Akavi and two Syrian drivers had been kidnapped by Islamic State gunmen in Syria in 2013.

She has now been held longer than anyone in the aid organisation's 156-year history.

The Red Cross, the government and media organisations have all remained silent on her capture until now because it was believed publicity could endanger her, but the ICRC decided that with the defeat of the caliphate it was time to appeal for help in locating her.

Australian journalist Dylan Welch is in Idlib in Syria and has just returned from the al-Hawl refugee camp, where thousands of IS fighters and their families are now being held.

He told Morning Report that depending on what had happened to her, Ms Akavi's identity may not have been known to those interacting with her.

"In ISIS territory ... people aren't referred to by their English [sic] names - they're generally referred to by names like 'Um-Muhammad' that just means mother of Muhammad - so she may have been given or taken another name and that would be the name by which she'd be known by the people in the territory where she stayed," he said.

"If that's the case all of this publicity wouldn't really matter, because they wouldn't know who she is. And also remember that you can't see people's faces a lot of the time because they're all wearing niqāb."

Louisa Akavi's message: 'Tell people to get me out of here'

New Zealand's Red Cross yesterday said the last known possible sighting of Ms Akavi was in December last year, but admitted it was highly likely that had not been her. 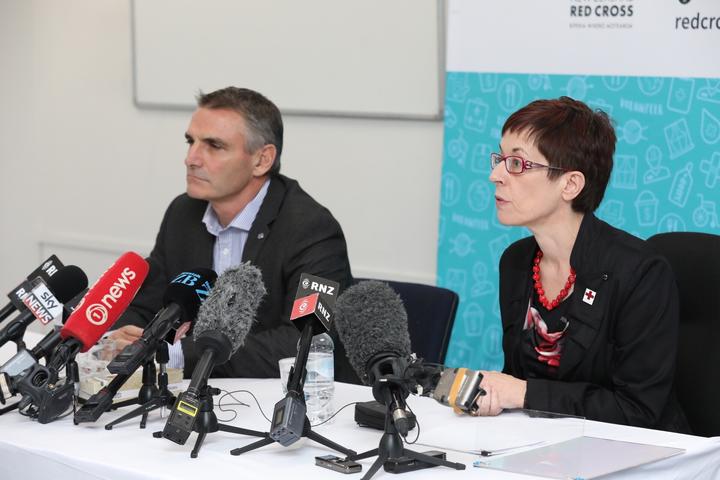 Abu Dhabi-based journalist Campbell Macdiarmid, a New Zealander, has spent time in refugee camps in Syria and spoken to former IS hostages who say they were held captive with Ms Akavi.

He told Morning Report they had been given a message to pass on from her.

"A couple of years ago I spoke to two of the hostages that had been held with her, they didn't want to be quoted on the record ... they were happy to tell me that they had seen Louisa and when they'd been released one of them was asked to take out a message for her.

"He could recall that she just said to him, you know, 'tell people to get me out of here, get me out of here', so when he was released he was debriefed by, I think, American intelligence, and passed that message on."

Where could Louisa Akavi be now?

International law professor Alexander Gillespie told Morning Report it was hard to say where she could be now, partly because of the chaos left by the IS loss of territory in Syria.

"Keep your fingers crossed, don't hold your breath," he said.

He said one of the big concerns now was that she was still a valuable hostage - including monetarily. 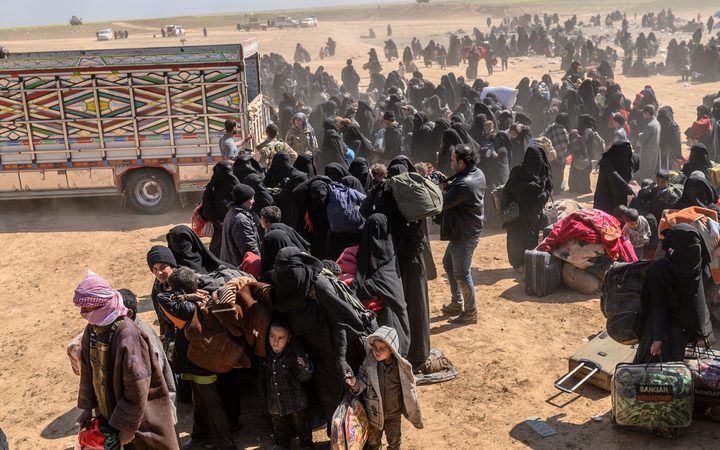 Women and children evacuated from the Islamic State (IS) group's embattled holdout of Baghouz arrive at a screening area held by the US-backed Kurdish-led Syrian Democratic Forces (SDF). Photo: AFP

"As Islamic State still remains active in very small cells, she could be sold to criminal groups because she still has a high economic value."

However, he also said it was possible she would be - or already had been - found by authorities.

"There's literally millions of people in and around who are displaced - she could be in those groups ... as the authorities - the Syrians; the Iraqis; and the Kurds - gain control they're finding who is there. That's how people like Mark Taylor show up."

If Ms Akavi had been swept up by the armies, it is possible she has been taken to one of several refugee camps. The Australian journalist, Welch, described a bleak scene at the camp he has been visiting in Idlib.

"The camp is just filthy. It's on an exposed hill, stretches forever, just mud and litter and human waste ... if you can imagine a big white camping tent that's pretty much what they have and that's the situation."

"There is no sanitation and next to no healthcare. 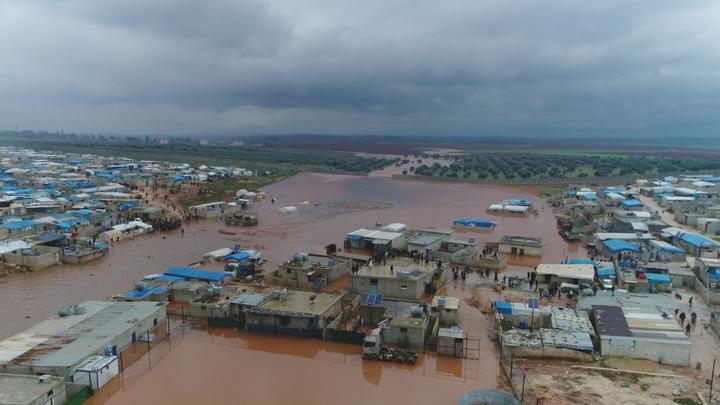 An aerial view of a refugee camp flooded after heavy rain in Idlib, Syria, in December when tens of thousands of Syrian refugees in camps near the Turkish border struggled to survive a harsh winter. Photo: AFP / Esref Musa / Anadolu Agency

"For people to get access to healthcare they have to walk to a section in the camp - often it's difficult for these people to walk very far because they have a variety of wounds and injuries and health complaints as a result of five years of war. Dysentery is rife."

He said the camp had two sections, with 11,000 foreigners separated from the rest in a section the locals call "the ISIS camp".

"Most of the people held in both sections of the camp are either refugees from ISIS or people who had joined ISIS and either fled once they realised just how depraved people were or ... essentially were forced out at the end during the fighting."

He said there was also essentially "an ISIS mafia" in the camp.

"A group of women ... who retain their commitment to the Islamic State. They go around beating up women, children; women who don't wear the veil and anyone who does anything that they consider not consistent with their rather extreme intrepretation of sharia law. 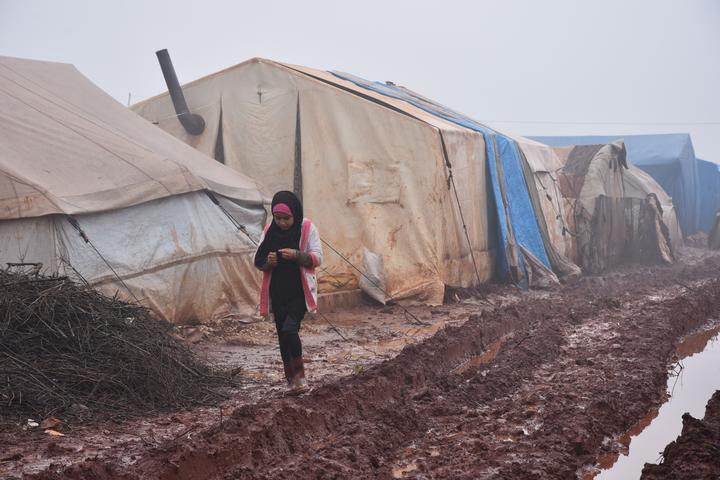 A girl walking in the mud outside her shelter at Al-Ihsan refugee camp. Photo: AFP / Muhammed Abdullah / Anadolu Agency

"The second time we went to the camp, when we tried to go into one of the entrance gates to the foreigners' camp - the ISIS camp - there was this crowd of these women ... when we turned up they got pretty agitated.

"They started chanting Islamic State slogans .. the guards were pretty agitated, there was pushing, shoving. The guards actually had kind of small versions of catle prods that they were cracking in the air - we didn't see them use them on anyone, but it was a deterrent.

"We went in, we went about halfway into the area that we wanted to go to in in the camp and we were called back by security ... we later found out that people had been stoned that day and the day before, they were throwing rocks at journalists.

"In fact, I think it was the day after, one of the guards was actually stabbed and killed by one of the detainees there."