Foreign Affairs Minister Winston Peters won't say whether the government was asked to pay a ransom for kidnapped nurse Louisa Akavi but says paying any ransom is a "very dangerous strategy''. 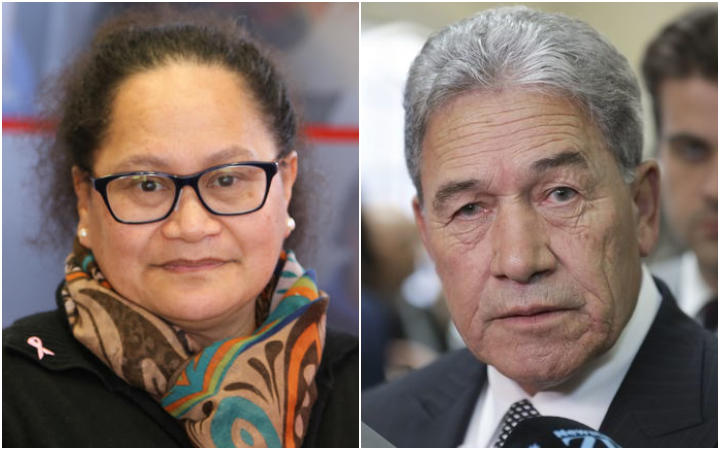 Mr Peters spoke to media today after the International Council of Red Cross (ICRC) public annoucement yesterday that the 62-year-old was kidnapped by Islamic State in Syria in 2013.

For years, RNZ and other news media have agreed to keep her capture secret but the ICRC agency has now decided to appeal for information.

A spokesperson for Mr Peters told RNZ last night that the move to release Ms Akavi's name had put her in more danger.

The comments came on the back of the ICRC expressing surprise that the government was saying it didn't want Ms Akavi's story to be told.

Mr Peters said today that a "lack of publicity would be in her interests'' and the government had never given up hope and certainly was not doing so now.

He reiterated his comments that the ICRC's position - that it didn't know the government didn't support its decision to release her name - was "balderdash''.

Yesterday the ICRC's director of operations Dominik Stillhart told media it would not have gone public without the government's support.

In a livestream from Geneva, Mr Stillhart went on to say he was surprised to hear otherwise.

"When I woke up this morning and I saw that was the information that came out of New Zealand, I was slightly surprised. We had numerous discussions, we knew what we were doing, the decision was taken in full cooperation with the government,'' he said.

Mr Peters would not comment on whether the New Zealand government had been asked to pay a ransom for Ms Akavi, saying "when you pay a ransom it causes countless other people to become the subject of ransom".

"It's a very dangerous strategy,'' he said.

As for whether New Zealand troops in Syria and Iraq were at greater risk as a result of Ms Akavi being named, Mr Peters said, "I can't answer that question but you know what my answer would be if I could answer''.

Mr Peters said New Zealand journalists were the government's witnesses to the fact it had been consistent in its message that it didn't want Ms Akavi's name released.

At times during her capture the government has been encouraged by the progress being made in finding Ms Akavi, "and then something would happen and change and all of a sudden we'd be further away from our target,'' he said.

"You probably wonder why we would go to that level of difficulty and the answer is across the political divide we've all shared the same view that a humanitarian effort of her kind deserves a response from a country, and I'm proud of that,'' he said.

Mr Peters met with Ms Akavi's family last week and said he shared with them that the release of her name was imminent and out of the government's contol.

At a post-Cabinet news conference yesterday, Prime Minister Jacinda Ardern refused to directly criticise the ICRC, but repeatedly stated that the government opposed its decision and made that clear to the agency.

"It absolutely remains the government's view that it would be preferable if this case were not in the public domain. For that reason I won't be commenting further on it.''

Ms Ardern said she understood the interest in the case, which was why the government released some details about the kidnapping but that was where the flow of information stopped.

She would not comment on reports of a ransom demand, New Zealand's operation to try locate Louisa Akavi or even if she was still thought to be alive.

She would not even say what message she had for Ms Akavi's family.

When the Red Cross expressed surprise that Ms Ardern did not want Louisa Akavi's story to be told, Mr Peters' office came out swinging.

In a statement from his office last night a spokesperson said the government was aware the ICRC was talking with the New York Times and advised at the "highest level of New Zealand's preference not to publish".

The government's view continues to be that the release of her story now "increases the risks to her life,'' a spokeperson said.

If there was any acknowledgement of Red Cross' media plan, "it was not an endorsement".

Ms Ardern told Morning Report the government has never changed its position on whether to go public with the case.

"We've been utterly clear, all the way through, that it was our preference that this would not be in the public domain.

The government did know of Red Cross' plans to release information on the case, but that was not an endorsement, she said.

"The International Red Cross took a different view, we continued to stay in touch with them in spite of the different perspectives, and we did know their plans to put the story out ... that wasn't an endorsement though."

She said she had also reconfirmed with officials that the government's position was clear and consistent throughout to ICRC.

"I've had it reconfirmed with several different individuals who've been involved that we've maintained absolute consistency.

"I have been reassured that there should have been no question over our position, the Red Cross has taken a different one and they've had a number of reasons for that."

Louisa Akavi was on her 17th mission, delivering medical supplies in Syria when the convoy she was travelling in came under attack and seven people were abducted.

Four were released the next day, but Ms Akavi and two Syrian drivers were not among them.

"We spoke to many many people including the leadership of Islamic State groups in different ways and via different parts of the world. We spoke to sheikhs in Europe, in the Middle East, in Asia. We spoke to the prisoners in the Middle East who might have been able to guide us to fresh information. But unfortunately we were very very unsuccessful, however we will keep trying," he said.

The ICRC did not know who initially kidnapped Ms Akavi, Alaa Rajab and Nabil Bakdounes, he said.

"They went through many other groups and captors and ultimately they ended up in the hands of Islamic State group," he said.

He said the fall of the last Islamic State stronghold, Baghouz in Syria, offered a fresh opportunity to try find her despite the chaos.

"When the villages or territories are falling, the fighters surrender, there is a huge displacement, the people try to flee in all possible directions. You lose track of people.

"We also wanted to publicly acknowledge the hardship and suffering of our colleagues ... we have never forgotten," he said.

For her family it has been five-and-a-half years of not knowing her fate and not being able to talk about her disappearance.

Ms Akavi's kidnapping is the longest in the 156 years of the ICRC.

International law professor Alexander Gillespie told Morning Report he believed that the Red Cross had hit the end of the trail in the search for Louisa Akavi.

"I think right now in their opinion, and you must remember that she's more of a Red Cross person than a New Zealand person in terms of her importance over there, this is their last option to try and find her."

Prof Gillespie said if the long-standing policy of not paying ransoms was breached it might create an incentive for other kidnappings of New Zealand citizens.

"That's a long-term policy but other governments take a different view. Other governments, because of the risk of their citizens being executed in a very public way, will pay that money over and we've seen that with France, Spain and Italy.

"Countries like ourselves, America, Australia, we won't pay for hostages."

New Zealand journalist Campbell Macdiarmid, who has spent time in refugee camps in Syria, has spoken to several former IS hostages who were held captive with Louisa Akavi.

He told Morning Report that keeping the case under wraps had not produced any positive outcomes so far.

"Some people maintain very strongly that all these cases should be kept out of the media until they're resolved, and other people disagree and say that there can be value in publicising and asking for information.

"People are going to have different views on that and some people who I know who have been following the case think it wasn't a good idea to go public, that she could be held somewhere now where additional publicity could increase danger to her.

"Either way, it's still imperative to get what information we can form this so we can find out what's happened."