Defendants awating trial by jury are facing months of delays as courts grapple with backlogs caused by Covid-19. 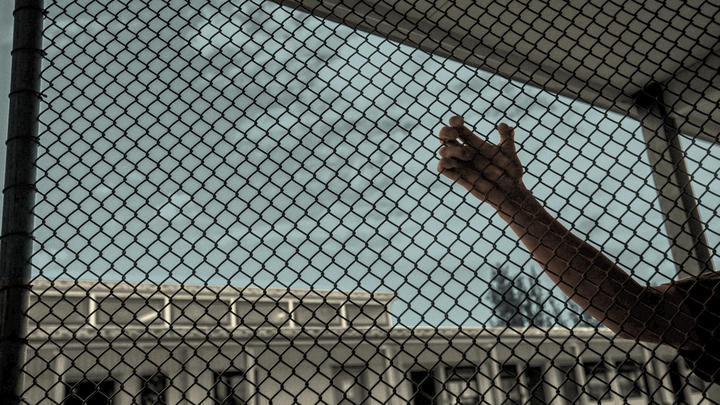 A hand holds onto the wire in prison Photo: RNZ/ Aaron Smale

The pandemic disrupted courts in a way not seen since the world wars; forcing judges to reschedule an estimated 60,000 hearings.

Jury trials will resume at the end of this month after being suspended in March, but lawyers say defendants are now waiting longer for their day in court.

"The delays were already reasonably crushing for jury trials or judge-alone trials; many months, if not years, to get to trial.

"And almost invariably the Covid-19 lockdown period has meant it's an extra six months to one year delay before your case will get heard."

She said the worst-affected defendants are those awaiting trial in custody, known as remand prisoners, who make up nearly 40 percent of the prison population.

"It's incredibly stressful waiting for your case to be heard, so to hear that their case is going to be at least months if not a year or so away, it's devastating for them."

Criminal Bar Association president Len Anderson said lawyers are particularly concerned about those being held in custody, who will go on to be acquitted.

"They can serve sometimes the whole of their sentence, if not a good part of it, before the trial is determined.

"And of course for someone who is found not guilty, they've spent a long time in custody for an offence that hasn't been proved."

He said huge delays may also tempt some defendants to consider pleading guilty to criminal offences so they can be released from prison.

"It's a difficult issue somebody faces in choosing between pleading guilty and being released immediately, particularly those who face a sentence of less than two years."

Justice Minister Andrew Little concedes it's not good enough, defendants - and victims - are waiting months, even years, for their court case to end.

"Look I worry a lot about the delay in some matters coming to court. We have a Bill of Rights requirement that justice is administered in a timely way; that people do get to be tried in an effective way, and the longer that is delayed and then the more that Bill of Rights right is being compromised and we cannot have that."

He said there is now a real impetus to increase efficiency in the court system; a sentiment echoed by the Chief Justice Dame Helen Winkelmann just a few weeks ago.

"It's of enormous concern because we talk about backlog and case numbers, but these are people's lives.

"The justice system impacts on individuals, families and communities, and every piece of delay in that system is something that we all should deeply regret," Justice Winkelmann said.

Elizabeth Hall said the Covid-19 pandemic has shone a spotlight on systemic problems she hopes will be addressed in these forums.

"We really need a dramatic rethink about the entire criminal justice system beacuse as Andrew Little said last year, it is indeed broken."