A trust fund is being set up to look after the health of the Waikato River as authorities agree in principle for Auckland to take more water from it. 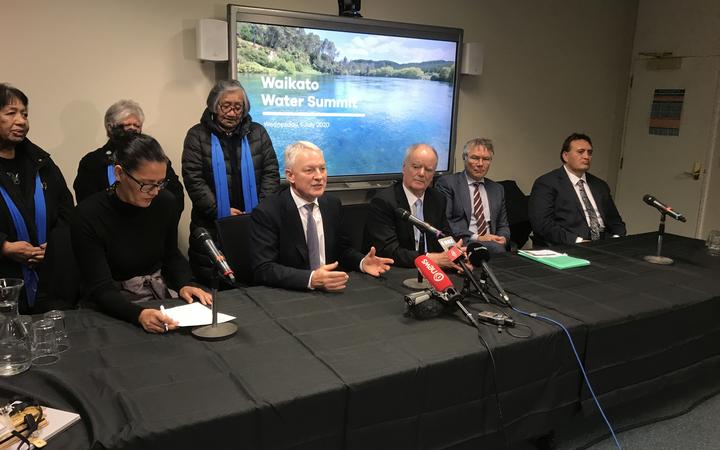 The agreement is an interim measure to help ease the region's drought crisis while a board of inquiry looks at the city's application to take more water from the Waikato Regional Council long term.

The deal to help ease Auckland's drought was reached at a meeting in Hamilton on Wednesday with members of the Waikato River Authority, Waikato-Tainui, the Auckland Council and Watercare, as well as ministers David Parker and Nanaia Mahuta.

It also includes a seasonal take of water between April and October provided the flow of the river is above average.

Mayor Phil Goff said everyone at the meeting had accepted Auckland's need was urgent during its worst drought on record.

He said several millions would go into the new fund which focused on improving the water quality and reduced pollution of the river.

"It is about the principle that if we in Tāmaki Makaurau take from the river, we want to give back to the river, so the establishment of a trust fund that will be designed around improving the health of the awa improving the water quality, reducing the pollution going into the river."

Goff said aside from the short-term solution, the city was also looking at using more water tanks and better recycling of wastewater.

"We know that that is a way of guaranteeing a sustainable supply of water for Auckland, augmented from time to time from the Waikato but not rely solely [on] or even predominantly on the Waikato and we will work together with Waikato Tainui to explore those solutions to find a good way through."

Waikato Tainui chair Rukumoana Schaafhausen said she was comfortable with the conversation and it was important that the parties had agreed on a set of principles.

"That is about putting the river fist, it's about upholding the vision and strategy for the river ... it is about the needs of both Waikato and Auckland. As a first step that was very important and I think that will guide us on the way forward," she said.

"We also need to take the time over the coming days to talk with our mana whenua and to our relevant authorities to get complete sign-off."

"Funding or reinvestment back into the Waikato River that's coming from Auckland, that is going to be equally matched by the river authority as well, so it's co-investment alongside one another."

Environment Minister David Parker said the meeting was "amicable" and the board of inquiry would be helpful to all parties.

"I think there's an appreciation across the Waikato Regional Council who've led this work, plus Auckland city, plus Waikato Tainui and the Waikato Water Authority that there're some underlying issues here that an enquiry might help to take forward."

Auckland water storage level was at 55.35 percent on Wednesday, still well below the historical average of 79.8 percent for this time of year.