Wainui residents say they feel left in the dark over Gisborne District Council's management of erosion at the beachside settlement. 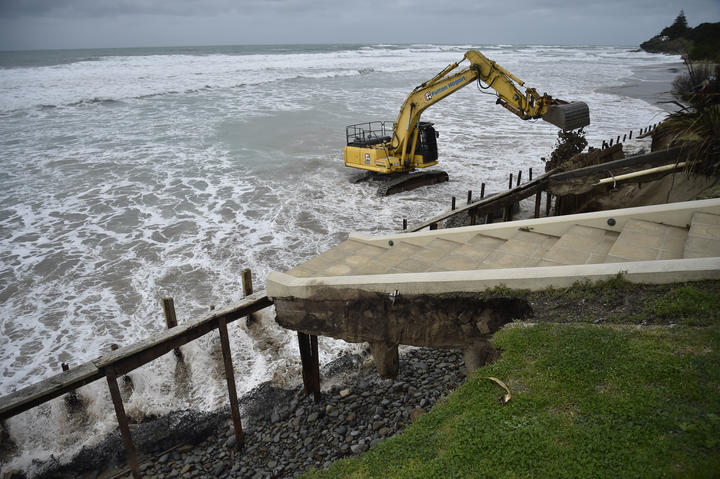 The council has retrospectively applied for a three-year resource consent for a rock wall it built on the town's seafront after large seas eroded several metres of land last September.

The rock wall was built in front of numbers 22, 24 and 26 Pare Street, which were temporarily evacuated during the storm.

The consent application was heard by independent planning commissioner Alan Watson at the council yesterday.

Watson's decision is reserved, but he said the consent would be granted, it was just a matter of deliberating on its conditions.

Earlier in the day, the commissioner heard from residents who supported the consent application but felt uninformed over the council's approach to managing coastal erosion at Wainui.

Shane McGhie, the council's principal consent planner, said the Wainui Beach Erosion Management Strategy was updated in 2012, but the event last September was a trigger for the strategy to be reviewed.

Evidence presented at the hearing showed a consultant's report regarding a potential review was due to be lodged today, with a decision to proceed with the review then up to councillors.

That was news to Pare Street residents at the hearing, including those who helped update the erosion management strategy in 2012.

McGhie said the three-year term for the rock wall's consent was partly sought on the basis the review to thrash out a longer term solution would take place in the interim.

Planning consultant Todd Whittaker, acting on behalf of the consenting authority, said it was clear the residents expected the council to be proactive in its management of coastal erosion at Wainui.

They wanted certainty over council policy and practice, he said.

The wall was put in front of the three homes that lost land to the sea last year, with adjacent beachfront properties left relying on stone-filled gabion baskets to prevent the surf from undermining their land.

There were also concerns about "end effects" - sand accretion and erosion at either side of the rock wall.

"There really is a need for council officers and submitters to come together, because you're dealing with a common issue," he said.

Watson also recommended the council nominate a staff member to be the point of contact for erosion-affected Wainui residents.

"A lot of councils seem to have this idea that people can ring in, to a helpline or the like, and you get a recorded voice on the phone and they take your complaint or concern on board, but it seems to me (coastal erosion) is quite a specialised area."