A response to erosion that is damaging properties and threatening homes at the coastal settlement of Wainui Beach will be figured out with input from residents, the council says. 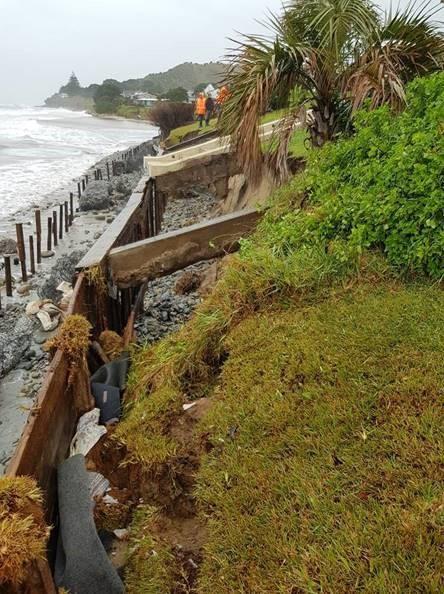 That led to the ocean eating away 8m of front lawn at those properties.

They were evacuated, and heavy rocks were put in place by contractors yesterday to keep the sea at bay.

The rocks would protect the homes, but were only a temporary fix, the Gisborne District Council's director of community lifelines David Wilson said.

He said the council would need to talk to the community about a long-term solution, which could include moving people away from the coastline.

"Under the New Zealand coastal policy statement we have to really work to see what we can do here.

"Retreat may be an issue that we have to look into with the community to see in the future what we're going to do - manage retreat, or hard structures. All of those are things that are going to need to be worked through"

Mr Wilson said fixing the sea wall was potentially part of the solution.

He said the council had a dynamic coastline to deal with, and sea walls had also been built at Tokomaru Bay to protect the road and property.

One of the residents who was asked to evacuate, Ronnie Amann said said his property came out with minor damage but his neighbour had lost 10m of their section.

"In the end the whole wall collapsed and lost integrity completely.

He said the waves pulled pieces of timber off the sea-wall like toothpicks in the wind.

"Once that happened the ocean with the next tide could just come in unimpeded.

"The property further north of me has probably lost at least ten metres of lawn and a vast amount of soil.

"We are talking big truckloads to replace the existing lawn, thousands of cubic metres of soil, it's major".

Mr Amann said the Gisborne District Council put heavy rocks in place yesterday to keep the sea at bay which would extend further along the coastal properties.

His property isn't covered under insurance for inundation by the sea because his house is in the "extreme hazard zone".

"That's the way it is ... you'll never beat the ocean, you can only manage her."