There have been three new cases of Covid-19 in managed isolation confirmed in New Zealand - two in Christchurch and one in Rotorua.

He said the Rotorua case was a woman in her 30s who arrived from Peru, and everyone who was on the bus to Rotorua with her is being followed up and tested. The bus driver - who was wearing PPE - will also be isolated and tested.

She was staying at the Ibis Hotel in Rotorua, but is now being moved into quarantine at the Jet Park Hotel.

Dr Bloomfield said work was being done to establish whether a quarantine section can be set up in Rotorua like the one in Christchurch.

The Christchurch cases are a man in his 70s and a man in his 30s who both arrived from India on 20 June on the same flight and tested positive on day three of their isolation.

They have been staying at Commodore Hotel in the city and and will be transferred to a special quarantine section of their hotel.

"Of course, any possible contact of these two cases are being identified and followed up." 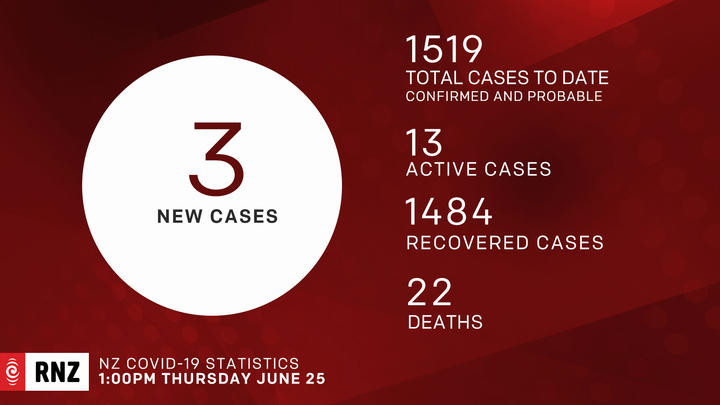 He said the Ministry of Health now has a person at Auckland Airport talking to passengers as they arrive in the country, obtaining health details like their NHI number.

"I'm really pleased our team has been able to put that in place, it's quite a manual process and it's got someone from the DHB out at the airport and we are working with customs aviation security to be able to get a data feed of those people who, once the doors have closed (on the aircraft in the country they're travelling from) and once it's landed... we can match (the data) automatically," he said.

Dr Bloomfield said two people who received compassionate exemptions are still awaiting test results and that enforcement services are working with the Ministry to follow up on one other person.

Dr Bloomfield also updated the numbers on the 2159 people who had left managed isolation between 9 and 16 June.

He said 1184 of those people have been contacted and tested negative for Covid-19 - 800 of those were tested before leaving isolation, while the remaining 384 were tested after leaving. 143 have also been referred for a test. 695 are yet to be tested and Dr Bloomfield is encouraging those to either pick up the phone when MoH calls or to call the MoH themselves.

He said 168 of those 695 people had invalid numbers. A further 137 are not being tested for reasons such as being a child, being a member of a cargo ship and those who have refused a test.

In other recent Covid-19 news, testing for every person with a cough or cold symptom has been dropped by the Ministry of Health (MOH).

Under new MOH testing guidelines, doctors and testing clinics, are urged to instead focus on those at highest risk.

MOH figures also show it has been unable to reach at least 58 percent of the people who left managed isolation untested between 9 and 16 June.