It has been another busy day at community testing centres in Auckland with long queues as people line up to get swabbed for Covid-19. 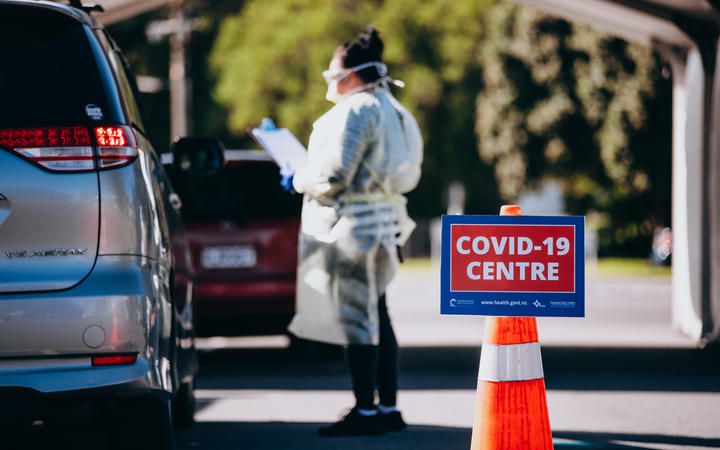 The number of active cases has gone from zero to 11, coinciding with the winter flu season.

One community testing station in South Auckland has seen the number of people turning up for a test triple, while a Whangārei doctors clinic has had its swab supplies restocked after they ran out.

There were long queues around two Covid-19 testing stations on St Lukes Road near the mall and in east Auckland on Botany Road.

At Auckland's Whānau Ora Community Clinic today, there was steady stream of cars pulling into a testing station set up in a large car park.

Matene Mataki was out front at the clinic in Wiri, directing people into queues.

"It's been crazy here. Today's not so bad, but yesterday and the day before was pretty bad."

He said workers stand out amongst the big mix of people coming in.

"There's a lot of fear out there aye, I think that's more coming from the work sector than anywhere else. Some people are just doing it so they can go to work. That's part of the rigmarole to go to work these days."

One woman in line to get tested said she popped down during her lunch break. She had been feeling unwell with a cough since Saturday and her work place urged her to get a test.

George Ngatai, the director of the Whānau Ora clinic, said the amount of people coming in soared from 100 to 200 or 300 in the last week.

He attributes this to the recent positive cases emerging in New Zealand, combined with flu-like winter illnesses popping up with the colder weather.

"We're in winter and there's a lot more flu symptoms coming in," he said.

He said the clinic was adequately stocked despite the jump in demand.

"We assess where we're at currently at every day. We've certainly seen that our numbers have increased - sometimes doubled, tripled the amount we're normally used to - but as and when that increase is identified we request more support."

Further up north, a Whangārei GP clinic ran out of swabs yesterday, but have now had their supplies replenished.

Over in Kaitaia, the practice manager for Te Hiku Hauora, Cheryl Britten, said they have also been very busy.

The GP clinic has not run out of swabs but they have had to duck across the carpark to Kaitaia Hospital a few times to replenish their stocks.

"We have a very good relationship with the lab based at Kaitaia Hospital, which has been very generous in supporting us by providing swabs."

She said the local primary health organisation also provided the clinic with a limited number of swabs.

The Director-General of Health Dr Ashley Bloomfield said there is no evidence of any community transmission and there are plenty of swabs available, if there are any shortages.

He said there is ready access to testing and district health boards can increase capacity if they need to.