There are two new Covid-19 cases in managed isolation facilities, the Ministry of Health has confirmed.

Director-General of Health Dr Ashley Bloomfield said the first case is a teenage girl who arrived on in New Zealand on 13 June and was travelling with her family, who have tested negative so far.

The teenager has been staying at the Novotel Auckland Airport hotel.

A New Zealander in isolation at the Auckland Airport Novotel yesterday said they were all in lockdown after being told of a new case at the hotel. However, the prime minister's office, the Ministry of Defence and the Ministry of Health all declined to comment ahead of today's media briefing.

Dr Bloomfield said the teenager's only symptom was a runny nose. She had travelled from Doha via Melbourne on one of the same flights identified last week.

The second case is a man in his 30s who arrived from India on 15 June, he has been staying at the Grand Millennium in Auckland and has no symptoms. His wife also has no symptoms but is being followed up with.

This brings the total number of active cases in New Zealand to nine. 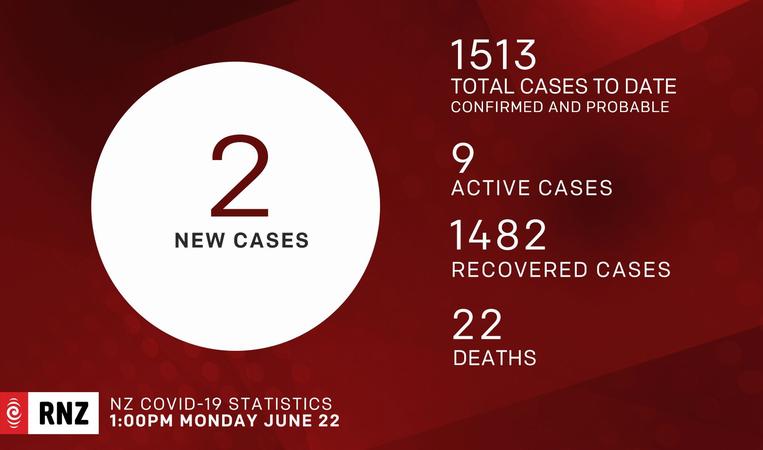 Dr Bloomfield said anyone who left a managed isolation facility since 9 June is being or has been followed up with a test.

Anyone who has been in such a facility and has not been contacted has been asked to contact a dedicated health line: 09 302 0408.

Dr Bloomfield said there were 55 people granted compassionate exemptions, and only one has not been followed up with.

Four of those were children who were not tested, but all others have returned a negative test.

All staff at the Novotel Ellerslie hotel, which two women who were allowed to travel to Wellington but later proved to have Covid-19 were staying, have been tested and returned a negative test, Bloomfield said.

Another 190 people had been guests at the hotel, 179 have been contacted, leaving just 11 others still being followed up with.

The rules for people in managed isolation facilities were being looked at to clarify exactly what they were allowed to do, Dr Bloomfield said.

"They shouldn't have contact with other people anyway," Dr Bloomfield said.

He said the public health unit did a thorough interview before people left the facilities, and CCTV footage was reviewed to ensure there was no risk.

Dr Bloomfield said they found over the past week that on very high levels of questioning some people had very mild symptoms they had not previously reported.

It showed how important the testing was, he said, but also that it was important to have the interviews because the testing is not completely failsafe and allows collection of other information such as flight details, he said.

He said he did not have a figure for how many people who were allowed to exit managed isolation facilities on compassionate exemptions had been tested, but he would get that.

He also said there were better ways to manage the flow into the facilities that were being looked into.

Meanwhile, Auckland's isolation facilities have reached capacity, with 4272 in managed isolation and almost 900 more expected to arrive in the country in the next two days.

As a result, two new managed isolated facilities were opened in Rotorua over the weekend.

Dr Bloomfield said the government was looking at the possibility of using campervans again as was seen after the first flight out of Wuhan, in February, to have additional capacity in Auckland.