A Far North local government leader is calling on her council to take a stronger stand on climate change's already-happening local impacts. 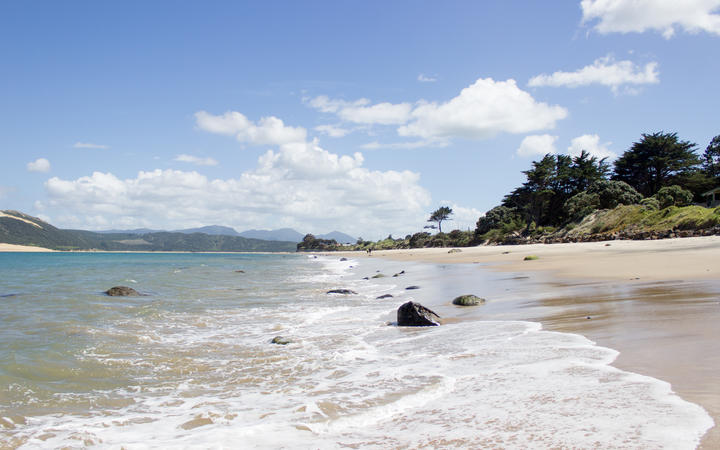 Omapere in the Hokianga Harbour, which was singled out as facing climate change-related issues. Photo: RNZ / Claire Eastham-Farrelly

Far North District Council (FNDC) councillor Rachel Smith said more financial resourcing was needed now to make sure her council's on-paper efforts to address climate change turned into action to help the district, its people - and the council itself.

"Climate change impacts are already happening around our district. In Omapere (on the shores of south Hokianga) for example, there's already a significant portion of reserve, basketball courts and a picnic table gone," Smith said.

Her call came at the Council's early May meeting.

She called for FNDC to commit $125,000 budget and a sustainability programme manager to help make sure the council's new climate change roadmap resulted in action. The document was presented for adoption at the council meeting.

"Climate change has been identified as the number one risk for our organisation and for our communities," Smith said.

"This roadmap is brave, it is data driven, it is measurable and it is digestible - but as with every piece of work, it's only worth the paper it is written on unless it is resourced."

It aims to guide the council's future climate change mitigation and adaptation efforts.

The document will be used to underpin actions including what the council itself does, critical monitoring data collection, community education and dealings with central government.

Climate change would have significant financial impact on FNDC.

"It affects everything - our roads, our footpaths, our water infrastructure, every single piece of what we do, even how our staff might get to work," she said after the meeting on 7 May.

Smith said the Far North's long, skinny shape meant it had lots of coastline and coastal communities. That, plus large flood-prone areas, meant it was at particular climate change risk.

She said it was understandable people sometimes wanted to put their head in the sand around the topic. Climate change's impacts were "a bit terrifying".

"But the longer we leave dealing with it, the bigger the bow waves of expense for our children, our grandchildren and our great-great grandchildren," she said.

The roadmap was about supporting Far North communities in their own climate change adaptation and mitigation measures towards building their resilience locally.

Shaun Clarke, FNDC chief executive, is to report back to the council's 21 May meeting on staffing and budget in the wake of Smith's call.

Climate change roadmap resourcing will then be further considered as part of the year's 2020/2021 Annual Plan.