A new mother who gave birth during lockdown has described her experience as traumatic to the Epidemic Response Committee today. 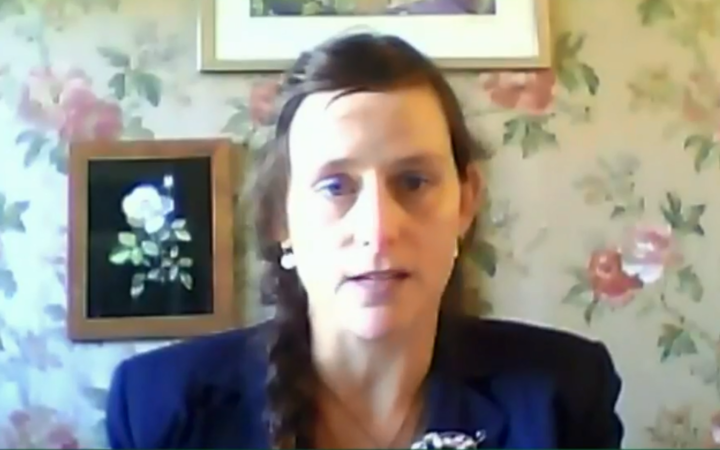 Rebekah Burgess talked to members of the Epidemic Response Committee via livestream on 6 May, 2020. Photo: NZ Parliament footage

Rebekah Burgess told the committee she was planning to have a natural birth at home but her midwife pulled out at 38-and-a-half weeks of pregnancy. She tried finding another midwife in time but was unable to.

"I told my midwife that under no circumstances was I to be left alone. My biggest fear, even before the virus hit, was being left alone after birth with a newborn I couldn't take care of.

"I don't have family support in Wellington to lean on, so that support was absolutely vital."

Burgess said felt vulnerable and unsafe and had no-one to advocate for the natural birth she wanted.

She was terrified to go to Wellington Hospital because her one support person, her partner Cameron, was not able to stay with her. He was removed from the room just after Trinity was born. He was distraught, she said.

"The requirement to be alone felt inhumane. Cameron was denied that precious time to bond as a father. When I discharged myself from hospital, I could see the pain in his face.

"I saw how women in America were prevented from having a support person during birth. I never thought it could happen here."

Burgess said she was provided substandard care at the hospital, and was criticised for not having enough nappies.

"I would have thought in a time of civil defence emergency women in hospials would be provided essentials if they weren't able to bring them.

"I asked for help from the midwife in the hospital with feeding and she told me there would be no-one to help me at home and I needed to do it myself."

She said hospital staff didn't seem to have the time to help her during the first two days after her birth.

None of the birthing staff wore Personal Protective Equipment (PPE), she said.

She said she did not know how many times she cried during the 48 hours in hospital, and she resented her baby at first, but luckily that passed when she left the hospital.

"Trinity is an absolute blessing and I love her so much."

She is still angry and never wants to see a midwife or hospital again.

"The lack of care in postnatal left me feeling like I had no worth as a mother, and that I was incapable, those feelings are taking longer to subside," she said.

"It's a shame my birthing process left me feeling so disempowered."

She said the leadership New Zealand showed was just lip service and she found it hard to find proper guidance and leadership.

"Women were confused about individual hospital policies and what maternity now looked like [under lockdown]. Ministry of Health guidance was unclear and fragmented.

"There was no real action, and no real leadership. A consistent national direction was non-existent and information was hard to get. Different DHBs had different rules."

She said the inconsistencies were "a hard pill to swallow."

She suggested to the committee that a number of measures needed to be put in place to support pregnant women during emergencies; to safe guard support, continuity of care, and implement a consistent national direction with clear communication.

She said the country's approach contravened the WHO's guidelines for care of pregnant women and patients' code of rights, and she wanted a holistic approach to birthing instead of a one size fits all approach.

Burgess, like those who spoke before her, moved a number of the committee members, including chair Simon Bridges, who reminded members to contact support services if they were struggling with today's discussion.