By Emma Russell of

A dying mum lay in a hospital bed alone for three weeks during lockdown, separated from her newborn son and loving husband. 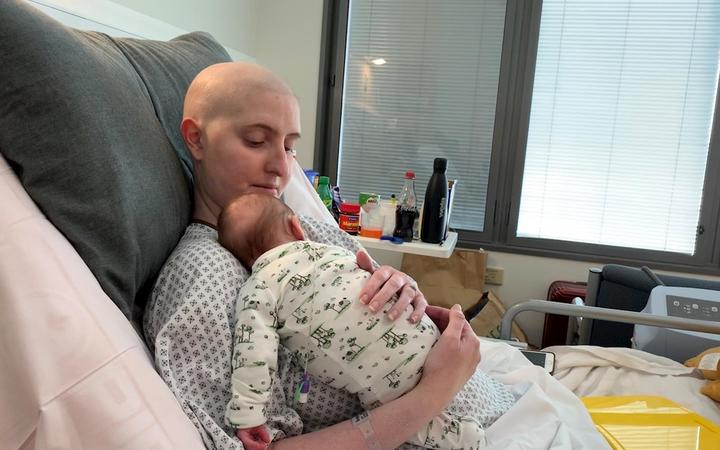 Julie Baines, who has an aggressive form of bone cancer, holds her son, Arlo. Photo: Give-a-Little

Today, for the first time ever, the family of three will eat breakfast and watch movies together in their new Upper Hutt home.

Julie Baines - who has less than two weeks to live - never expected to get pregnant.

After already fighting off an aggressive bone cancer twice, her body had been fried with radiation and chemotherapy.

On top of that, her husband, Liam, lives with auto-immune disease lupus, which causes his body's immune system to become hyperactive and attacks normal, healthy tissue.

Yet, last year the young couple discovered Julie was pregnant and were over the Moon.

"We all couldn't believe it. It was a total miracle. They recorded videos telling different family members who were all in shock," Liam's aunt Rowena Baines told the Herald.

Tragically, when the 26-year-old was three months pregnant she was re-diagnosed with Ewing's Sarcoma - an aggressive bone cancer.

In September, Julie was hospitalised and a neurosurgeon removed the majority of the tumour but had to leave some as it was tangled within the spinal cord which left her in a wheelchair.

"Arlo was amazing ... his heart-rate didn't change at all through surgery," Baines said.

"When he was born his whole foot fitted into a wedding ring."

Due to Covid-19 restrictions, Arlo and Liam couldn't visit Julie in hospital.

"We tried asking for access to see Julie but there was zero tolerance at that time," Liam said.

In the end, Liam said he made the decision to take Julie home because if she had stayed she wouldn't see her friends and family again.

"It's amazing to finally be back together. At the same time it's painful because she is still so limited with her daily care and the wheelchair.

"We can't share a bed and she has at least two hours of maintenance for her drugs, care and pressure wound care, so life still isn't the same." 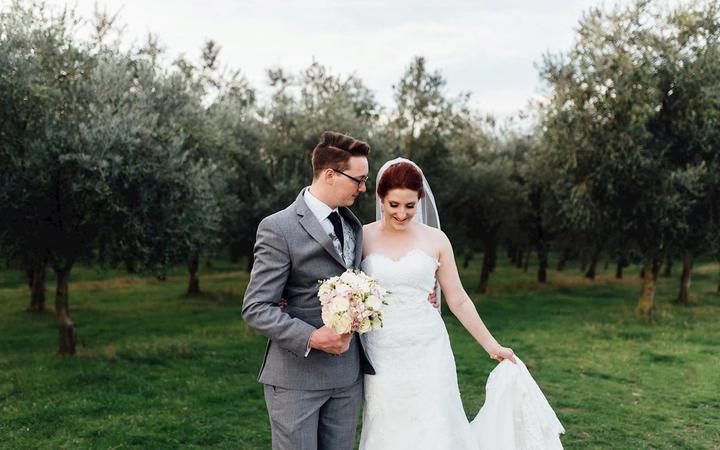 Liam and Julie Baines on their wedding day. Photo: Give-a-Little

He said they had amazing help from family but haven't been able to have a lot of alone time together because of the living arrangements - "which was super generous but our home was delayed due to Covid".

"I'd sum it up as bitter sweet, but a massive improvement over the visitations I had previously," Liam told the Herald last night, just hours after they had moved into their new home.

A Givealittle page, called Bubble Trouble, has been set up to help give baby Arlo the best possible start in life "and provide financial support for this amazing young family as they face the changes and challenges that lie ahead".

"Let's give Julie some peace of mind that we have wrapped a cloak of financial support around little Arlo and his dad Liam, as he embarks on the journey of fatherhood being a stay-at-home dad," Baines said on the page.

Julie said: "We couldn't have asked for more care from the people around us. Even the nurses who helped make the small things still matter, by getting us anniversary cards for instance. The sheer number of blessings we've received at this time really reinforces the amount of support and love we've felt and we're so grateful."

This story first appeared in the New Zealand Herald