A Palmerston North mother says it was daunting and emotional having to give birth at hospital with no whānau support. 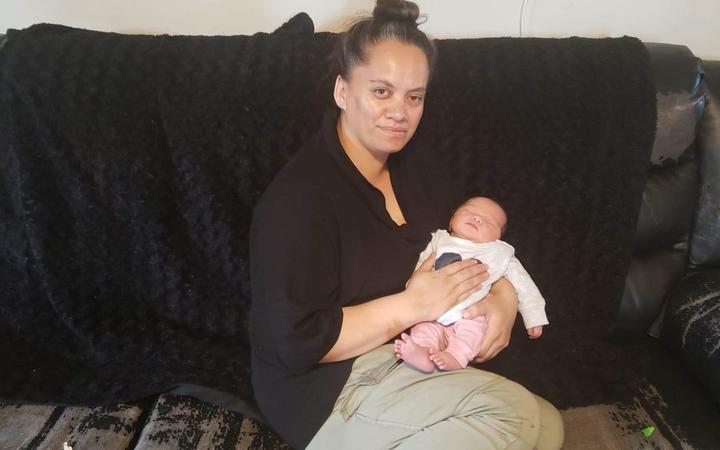 Carolyn Hautapu gave birth to Oriwia at Palmerston North Hospital under lockdown with no whānau support. Photo: Supplied to RNZ

Hospitals are only allowing one person to attend a birth during alert level 4 for Covid-19, but the current crisis still poses barriers for families.

On Sunday, Carolyn Hautapu gave birth at Palmerston North Hospital to her sixth baby but this time she had no whānau with her.

"It was an emotional time not having them," she said.

"But I sort of put my feelings aside and just soldiered on, so I had great support up there with the midwives.

"I really felt for those people giving birth for the first time, they may not have had anyone, just like I did."

Hautapu was allowed one person with her but her partner Richie Matthews stayed home to care for their other tamariki.

She said her mother could not attend because she is high risk, and her sisters lived with her mother so that ruled them out too.

"It was quite a daunting idea knowing that I would have to give birth during lockdown.

"When we found out the rules regarding how many support people the mothers were allowed up at the delivery suite I thought 'Oh my gosh! I am not going to have anyone!'"

Whānau bubble increases by one

Nevertheless on Sunday, the Hautapu-Matthews bubble increased by one and baby Oriwia was born healthy.

Hautapu said it was strange not having any visitors at the hospital, which she said was quiet like a "ghost town".

The two were home the very next day but Richie Matthews said it was tough missing the birth of his baby girl.

"I was gutted that no-one could be up there with her, especially the comfort of your mum," he said.

"I found it hard too, because I have always been there at our kids' births, but I just thought if it's the best thing to do then it just has to be."

Hautapu said she felt safe giving birth at the hospital despite the concerns around Covid-19.

She said there were extra safety measures in place, but not many people were wearing masks and gloves.

Her next check-up with the midwife may be done over the phone.

Daunting time for midwives too

Christchurch community midwife Belinda Marker said the past week had been crazy while working through the Covid-19 crisis.

She said midwives were having to re-think which visits they did in person and how much time they spent in people's homes.

"It's really to ensure that we keep women and whānau safe and keeping ourselves safe," she said.

Marker said after every home visit, she returned home and had a shower and sanitised her keys and such.

She said midwives had not been supplied with much protective wear, which had increased their concern about working through the lockdown.

"Midwives are quite scared really," she said.

"There are so many midwives actually out there even on social media asking for people to donate equipment - PPEs [Personal Protective Equipment], masks - because we just can't access it."

Yesterday, the government announced it would send seven million masks to frontline health workers, including midwives.

In the Ministry of Health's guidance to district health boards on prioritising PPE, it says health care professionals including midwives who care for non-infected patients are considered of lower priority. The ministry has also recently updated its guidelines for health workers on when PPE should by used and by whom.

Marker said that was just one part of it - they also needed sanitiser, medical grade wipes, and disposable gloves.

She said their fears of catching or spreading the virus were not helped by some families, who were breaking the rules.

"A lot of midwives are having the experience of going into homes and there's a lot of extra people in the home or someone just wanted to pop in and visit the baby - and you have just breached those bubbles.

"We are walking in and out of homes, we want to keep women safe and we also want to keep our own families safe."

In some cases, families could get a babysitter during lockdown so the father could attend the birth, she said.

The guidelines are on the New Zealand College of Midwives website.