A New Zealander has been arrested in a major methamphetamine bust in Australia that began in the waters off New Caledonia. 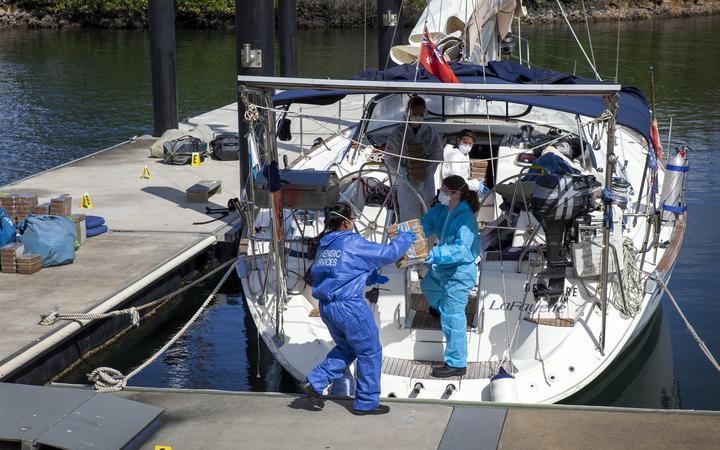 A total of 1009 blocks, each weighing about 1kg, have now been unloaded from the vessel by specialist forensics officers. Photo: Supplied / Australian federal police

Australian Federal Police say the 33-year-old man is one of two men arrested on board a yacht carrying a tonne of the illicit drug also known as P.

The yacht was intercepted off the New South Wales coast near Lake Macquarie, after an international sting involving agencies from Australia, New Caledonia and the United Kingdom.

The man, along with his alleged 35-year-old accomplice who holds dual British and South African citizenship, has been charged with importing a commercial quantity of border controlled drugs under Australian law.

If convicted they face life imprisonment.

The operation began after New Caledonian authorities took an interest in a vessel whose crew told them they had sailed to New Caledonia from Mexico, Australian federal police said in a statement.

This led to Australian police tracking the movements of a second vessel, the La Fayette, which was intercepted off the coast of Lake Macquarie in New South Wales on Saturday.

The two crew members, including the New Zealander, were arrested on board.

The pair appeared via a video link in the Parramatta Bail Court yesterday. They did not apply for bail and were remanded in custody until their next hearing on 28 April.

Police allege they found blocks of methamphetmine wrapped in plastic on board the vessel.

AFP assistant commissioner eastern command Justine Gough said even though national borders were closed in many countries to help prevent the spread of Covid-19, police remained alert to the risk of illicit drugs being brought in.

"Organised crime groups will stop at nothing - not even a global pandemic - to try and flood our communities with drugs for greed and profit," assistant commissioner Gough said.

"Our cross-border collaboration remains strong in these times, and through our relationships worldwide, we will not stop in our efforts to protect our communities from the destruction of illicit drugs."

Joint investigations are continuing, and further arrests have not been ruled out, the police statement said.