A man whose mother-in-law lives at Rosewood Rest Home and Hospital in Christchurch says he's been unable to find out if she was moved to Burwood Hospital. 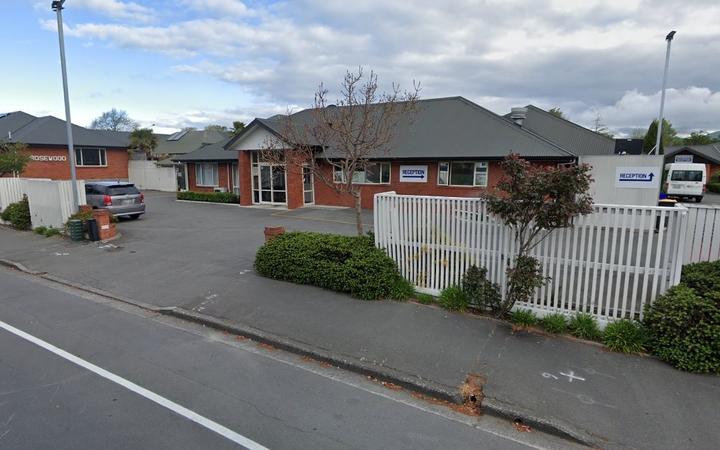 Rosewood Rest Home and Hospital, where the second person to die from the Covid-19 coronavirus was living. Photo: Google Maps

It comes after another three residents lost their lives - bringing the death toll to six in the deadliest Covid-19 cluster in the country.

Twenty residents from one of Rosewood's dementia wards were moved to Burwood last week, after 16 confirmed and probable cases were identified in that ward.

All six deaths have occurred in the group that were moved, and Director General of Health, Dr Ashley Bloomfield, told media this afternoon the latest deaths were two men in their 90s and one man in his 80s.

He said all the victims had underlying health conditions to some degree.

"That does not make today's news any less sad," he said.

"This is the largest number of deaths we've reported on any day in New Zealand and it's a sobering reminder of what is at stake here. I do want to acknowledge the families associated with those people who have passed and offer my sympathy and those, I think, of all New Zealanders."

The total number of cases in the cluster in the Rosewood cluster is 34. Canterbury District Health Board had previously suggested a staff member was the likely source of the outbreak.

"These are a group of frail individuals who needed ongoing support; they were moved as a group but kept in isolation," she said.

But one man, who asked to remain anonymous, said he couldn't get confirmation about which ward his mother-in-law lived in, and if she was among those moved to Burwood, despite having "serious concerns".

Neither he nor his wife were able to get a clear answer from Rosewood or the health board.

"We think that she's in the dementia ward but we're not sure if she's been transferred to Burwood. It's just really, really crap trying to wait and see really," he said.

Last night, the health board confirmed one of the cases in the cluster isn't a resident, but a Burwood Hospital staff member.

It said investigations were underway to work out how they got the virus despite being dressed in personal protective equipment.

The man whose mother-in-law lives at Rosewood said he would also like a bit more information about how the remaining residents are being protected.

"When we ask questions around whether they have PPE, and whether the staff work with the other, non-affected elderly, there's just a lack of transparency," he said.

Other family members of residents have spoken out in support of Rosewood staff, with Dr Bloomfield reading out two statements praising the "incredible" job they're doing to protect residents and keep them in touch with loved ones.

Christchurch woman Mandi Lawrence, who helped her father move into Rosewood in January, said it was clear staff did "everything they possible could" to keep Covid-19 out.

They had also helped her stay in regular contact with her father via Skype.

"If we were allowed to send flowers I would have sent many bunches by now," she said.

She said families with loved ones in Rosewood were facing a lot of stresses, but knowing the effort staff put in to stop an outbreak made it "really sad".

Neither Canterbury District Health Board, or the owners of Rosewood Rest Home and Hospital, responded to requests for comment today.