Civil Defence is warning heavy rain, swells and strong winds are headed for the West Coast over the next 36 hours. 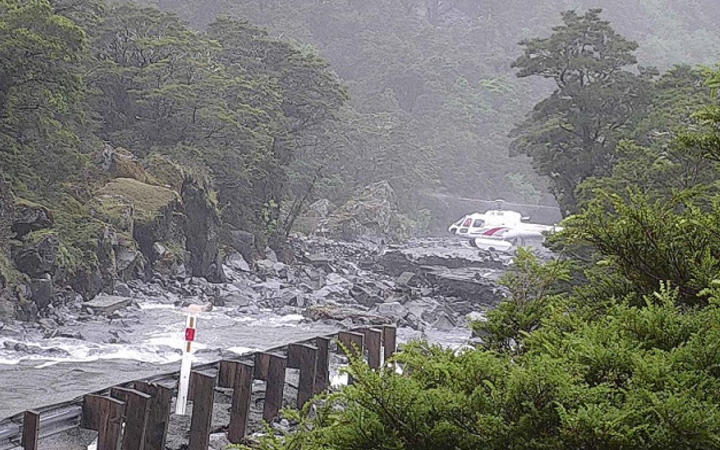 Parts of the West Coast including Milford were seriously damaged by a storm in February. Photo: NZTA

And many parts of the country can expect a wet Easter Monday, MetService is warning, with thunderstorms and hail on the horizon for some.

Civil Defence says waves of up to six metres combined with a high tide could affect low lying towns on the South Island's West Coast.

The West Coast group controller John Canning said emergency centres have been planning how to respond to gale force winds and heavy rain while the country is in lockdown.

He said most people are doing the right thing and staying at home.

But he warns no one should be venturing down to the coastline at all over this time.

The MetService is warning the West Coast to expect some thunderstorms later today.

It is also predicting periods of rain, spreading elsewhere tonight with some heavy falls with some hail expected tomorrow and snow lowering to 500 metres in the south.

Those in western South Island could hear the rumbling of thunder later today with thunderstorms possibly moving through from the west. Already a couple of ⚡ out to sea on the Radar https://t.co/BZWb806UfN ^MM pic.twitter.com/QRDYvf12bR

The bad weather will move up the country with a strong wind warning in place for Wellington and the Marlborough Sounds.

The main front is making its way up the South Island quite nicely. Can you spot where the centre of the low is over the Tasman Sea? https://t.co/rcECVupmWY ^MM pic.twitter.com/mp5mxMzHXE

As the front continues its approach, the latest Severe Weather info has been issued. Strong Wind Warning for Wellington and the Marlborough Sounds tonight, and a Watch for central and lower North Island. See https://t.co/qHyE5zhh6X for full details pic.twitter.com/RUn5FW7GZJ

Most of the North Island, apart from Gisborne and Hawke's Bay can expect a wet ending to the Easter break.

Rain will set in tonight, and may be heavy with possible thunderstorms early tomorrow, then turning to showers, MetService says.

Cloudy periods with showers for most in the North Island will continue on Tuesday.

Canterbury, especially along the coast south of Ashburton, can expect a wet Easter Monday with some hail also possible.