An Auckland woman caught Covid-19 from her daughter, then infected her manager who went on to infect her husband - and all of them spent days trying to get tested and being put off or refused. 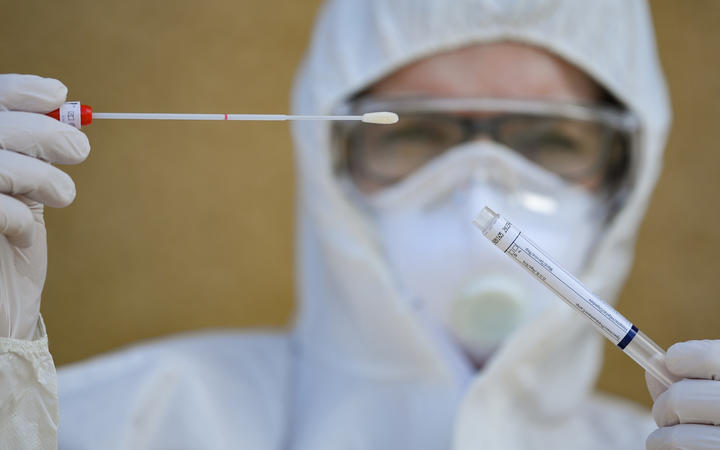 The four cases all stem from the country's biggest cluster of cases at Marist College in Mt Albert, where there are now 77 confirmed cases.

The Ministry of Health's Healthline, and a community testing station - though informed of the Marist College link by one of the two women who were sick - still refused to approve tests.

The husband found out yesterday he has the coronavirus. He has been to the supermarket during the lockdown.

Yesterday, Prime Minister Jacinda Ardern said the country must have "watertight" systems to get out of the coronavirus lockdown in two weeks, on 22 April.

Systems were improving, she said, but epidemiologist Sir David Skegg and others have questioned if border control and contact tracing are good enough.

For the two professional, working women in Auckland and their families, the experience has been far from watertight.

In mid-March, the daughter of the first woman was sick with a sore throat but a strep test came back negative. The girl is a student at Marist College in Mt Albert.

The woman started to feel unwell, and by 19 March had a bad headache, but went to work the next day and had a 15-minute meeting with her manager.

She got worse, with a fever and cough, and on 22 March - the same day parents were told Marist College had a coronavirus case - she called the ministry's Healthline.

"Because my daughter had recovered by that point, and because I hadn't been at Marist in person or in contact with someone from overseas, they said, 'I think you've got seasonal flu' and they didn't test me."

She told them her daughter had had a very sore throat and some fever. "So I did find that [decision] a little strange."

"It was quite an anxious time, not knowing whether I had [Covid-19] or not but having been been told that I didn't."

The next day, 24 March, Marist College told parents every student was being treated as a close contact and that it now had four confirmed cases.

The woman called Healthline again, asking to be tested, and again told no.

She was still worried about her manager and the manager's husband being unwell.

She went to her GP on 31 March, the day Covid testing criteria was eased by the government, and with the GP's referral, she got a test - nine days after first ringing Healthline.

Her test came back negative on 2 April.

On Sunday, 5 April, her daughter's best friend was confirmed as one of the by-now dozens of Covid-19 cases at Marist College.

The woman then received a call from the Health Ministry.

"They kind of quickly came to the conclusion, 'Gosh, yes, you are a probable case', and got hold of my boss and my boss' husband, and they were allowed a test a day or two ago.

Her manager tested negative as expected "because she was only a day or two behind me" but the manager's husband was positive, the woman said.

The woman and her daughter are now classed as "probable cases" because they have recovered.

She is convinced she is responsible for passing on the infection to her manager and the manager's husband getting sick.

Within three days of the woman and her manager meeting on 20 March, the manager was feeling sick and aching all over.

By 27 March the manager had lost her sense of smell and taste.

The couple's two young children were unwell around this time and she had called Healthline but been told not to worry. The children recovered.

"The way we were feeling was unlike anything we've felt before," she said.

They rang their GP and Healthline who both suggested they get tested, and gave them a number for the local community Covid-19 testing centre.

"They asked us a few questions like, do you have a fever? Do you have a cough? Have you travelled recently overseas? Things like that.

"We kind of answered no to all those questions because we didn't have a cough and we'd had chills, but we hadn't actually taken our temperatures, so didn't know if we had a fever or not. So they just immediately dismissed us as not meeting the criteria for testing."

The centre "didn't seem too concerned" that their doctor and Healthline had referred them.

"It felt quite dismissive."

On Wednesday 1 April she heard that her work colleague's daughter had been in direct contact with a confirmed case, a girl at Marist College.

"So we tried again, to say, you know, we need to be tested - there is a link to the Marist school situation.

"And we had heard that they'd opened up the criteria for the testing so it wasn't just based on having travelled or contact with somebody who'd travelled."

They had some symptoms.

"But they still said we weren't meeting the criteria in terms of having a fever and a cough and shortness of breath, so, again, said no, we don't meet the criteria."

The testing centre nurse on the phone said the Marist link was not enough.

"They didn't seem too concerned, [saying] that unless I've had direct contact with a confirmed person - which at that stage I hadn't, it was a probable contact - so they dismissed it as not being enough to meet the criteria."

She had, in fact, had direct contact with the mother of a girl who already by 24 March had been sick and had been deemed by public health to be a "close contact" of an infected person. But authorities did not know that yet because they had not tested the girl or her mother, despite the unwell mother's two calls to Healthline in late March, pointing out the Marist link.

On 5 April a public health nurse rang with news of a positive test of the girl at Marist College linked to the daughter of the first household. The daughter had stayed at the girl's place the weekend of March 21-22.

Only with that test - 13 days after all students were deemed close contacts - did the contact tracing lead to the manager's household which was then allowed to get a test.

The test results came back on 7 April. The manager is a probable case as she has recovered and the husband has Covid-19.

There were several days before lockdown when she was probably infected but not yet unwell, she said.

Even after lockdown, her Covid-19 infected but untested husband had been to the supermarket.

Was this a "watertight" system?

"No, it didn't feel like that at all. It felt like they were being far too stringent."

She raised these concerns with Regional Public Health, she said. "They just sort of apologised and said, 'Yeah, the criteria at the time when I was calling was ... they weren't basing it on on what they're basing it on now."

Yesterday the couple went through a contact tracing interview by a regional public health nurse.

It was thorough, but the nurse asked only about the two days before the woman started feeling unwell, and not about who she had contact with in the week prior, she said.

She was able to remember contacts she had had because of the limits of the lockdown.

But she worries if the alert went to level 3 and people started moving about what would happen if the Health Ministry's largely manual contact tracing system had not been beefed up by some form of digital back-up tracing.

"It's incredibly important. Without that it's almost impossible to remember.

"I mean, we all know that you can barely remember what happened yesterday, let alone two weeks ago.

April 2 - Test result: Woman and her daughter deemed 'probable' cases (due to both having recovered)

March 19 - The woman is the manager of the Covid-19 infected woman from the first household; they have a work meeting