A New Zealander who arrived home from Thailand yesterday morning says the Covid-19 measures at Auckland Airport are "loose" and she felt safer in Southeast Asia. 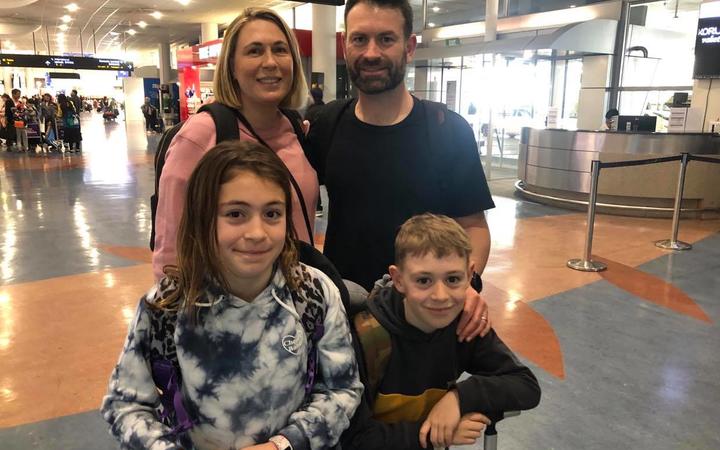 Maree Glading and her family setting off on their trip, which was cut short by the Covid-19 pandemic. Photo: Supplied

Maree Glading said she left the airport with no information on Covid-19 or self-isolating for 14 days - which is now a requirement of most people arriving in New Zealand, to stop the spread of the coronavirus.

"There was no, 'do you understand what isolation is? Are you prepared to isolate for 14 days?' There was nothing like that - no temperature checks, no hand sanitiser."

Glading, an Aucklander, said the customs officer who checked her passport casually said, "Are you well?"

"It seemed like butt-covering rather than thorough investigation," she said.

The only other measure she saw was officials handing out cards, that she said looked like arrivals cards, which asked for contact details.

They contained some information on Covid-19 but she said travellers couldn't do more than glance at this as they had to fill out the card in queues, sign them then hand the card in.

Glading said that made no sense as people then left the airport with no information to take away with them.

She was also amazed to see travellers greeted in the arrivals hall by friends and family.

"There were planes coming in from category-1 countries... and these people are picking them up and having a hug with them."

Glading said she overheard a man in front of her in the queue for Customs saying he was from the United Kingdom and was in New Zealand for two weeks. She later saw him pick up a brochure on tourist hotspots to visit in New Zealand.

She called out to him and asked why he was picking up a site-seeing brochure if he would be in self-isolation the whole time he was here, but he looked at her, looked away and walked off.

"As a New Zealand citizen, I want to keep New Zealand safe and healthy, but the backpackers - do they really care?"

Glading said she did not receive any information on Covid-19 or self-isolation on board her Air New Zealand flight either.

Air NZ told RNZ it was the Ministry of Health's job to inform travellers about the virus and self-isolation.

RNZ has contacted the Ministry of Health for comment.

It had previously said all passengers arriving in the country were being assessed and screened. Healthline was following up with people self-isolating, and the government said those who did not follow instructions relating to Covid-19 could be detained or deported.

But Glading said her experience at the airport left her worried the measures weren't effective in practice.

"I'm not an expert, obviously, but to me there was some basic procedures and measures that needed to be taken but weren't.

"To my mind, it should be: 'Where are you staying? Will there be anyone else there? Do you understand the isolation procedures?"

"Everyone I talked to said 'thank God you're coming home, New Zealand is so safe,' but you know what? I felt safer in Thailand where they're taking it seriously.

Glading said she had her temperature taken in Thailand airports multiple times and in the Singapore airport she transited through once. She said there was hand sanitiser everywhere.

Glading was six months into a seven-month long world trip with her husband and two children when they became concerned about Covid-19 and decided to come home.

They had lost money on flights and accommodation but she said she felt their situation was much better than many others, who were facing serious turmoil from the spread of Covid-19.

The family rented out their Auckland home before setting off to travel so were now self-isolating in a hotel, before moving back into their house.