Kea may be best known for their irritating cry and tomfoolery, but it turns out the tricky green parrot isn't so different to humans when it comes to problem solving.

In a paper published today in Nature Communications, University of Auckland experts found the birds can judge statistical odds in a way only ever seen before in infants and great apes.

In a range of tests at the Willowbank Wildlife Reserve in Christchurch, kea worked out that choosing a particular coloured token always led to a food reward, and even managed to learn which of their rangers was most likely to pick the token they wanted.

Study co-author Alex Taylor, a psychologist who studies intelligence in animals and birds, said the behaviour they saw was unprecedented in birds.

"The kea and chimpanzees and humans are all showing this ability to reason.

"I think the reason that they're showing this curiosity, this playfulness, is because there's this really interesting intelligence going on in their minds which is a lot smarter than we thought it was."

The kea learned that choosing a black rod over an orange rod would lead to a treat, and were able to predict which jar would most likely result in their ranger pulling out a black rod.

Bastos said the kea remembered which ranger was more likely to choose the rod or token they wanted, even when there were very few black rods in a jar.

"Kea were looking at the biased experimenter, understanding that they had a bias for a particular type of token, and then selecting this person when both experimenters had the same populations of tokens."

She said the findings helped us understand more of their social structure.

"We were very surprised to find that kea can use social cues even from humans, to make these judgements."

To date, only humans and chimpanzees have been shown to blend social and frequency information in this way.

"This is the first evidence that a bird can make true statistical inferences and integrate different types of information into their predictions of uncertain events," Bastos said. 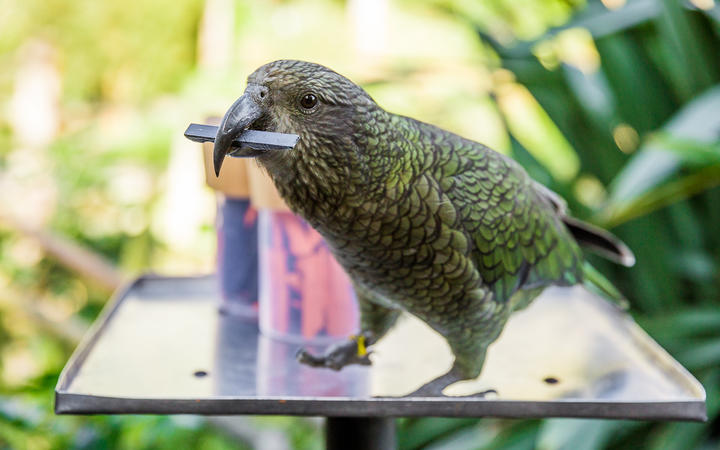 Willowbank's head of native species Nick Ackroyd, who has worked with captive kea for 11 years, said he was not surprised by this level of brainpower.

The alpine parrots are perhaps best known for using their hooded bills to pinch shiny things from mountain travellers and historically were known for attacking sheep in the paddocks of early settlers.

Ackroyd said there was a clear level of planning that went into their tomfoolery.

"They're good at using other kea as decoys while they go through a family's possessions looking for things that they might like. You can tell they're pretty smart."

Occasionally, they would go as far as to pilfer car keys from unlucky tourists and drop them in a pond, "which makes leaving the park quite difficult," Ackroyd said.

Dr Taylor was hopeful that more research to better understand their intelligence could help to preserve this species, which are nationally endangered.

One of the best ways they could be protected is to avoid feeding wild kea, as that can lead them to play with toxic bait, or hunt for food near highways where they can easily get injured.

Dr Taylor said although it was a pain when they attacked cars and keys, it was a playfulness people should cherish.

"We still haven't really compared them to other birds to find if they're the smartest, but right now they're definitely the world leaders when it comes to thinking in this type of way."

So, next time a big green parrot takes off screaming with your car keys, rest assured you've been pranked by one of the world's smartest birds.