Northland's biggest trucking operator has accused the Transport Agency of letting an employee wage a personal vendetta against him that's cost him millions of dollars. 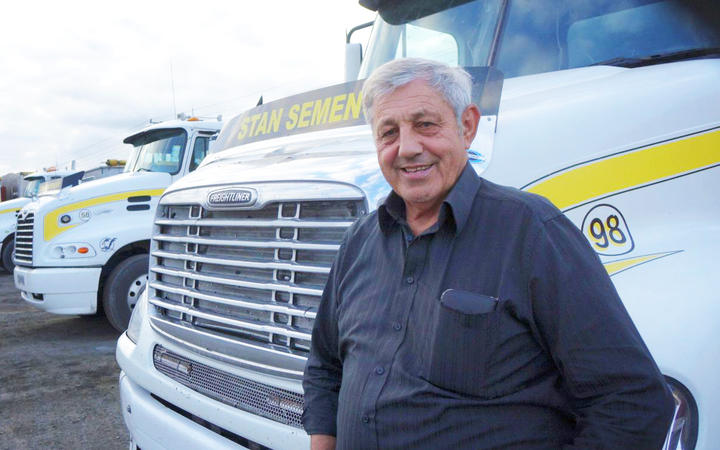 Stan Semenoff says the employee went after his scalp, but he's defeated the Agency and shown that it had no safety case to begin with.

This follows three years of warnings, two NZTA audits and a year-long court battle to strip the operating licence from the ex-mayor of Whangārei's 50-plus-strong logging fleet.

"They had nothing in the first place, mate," he told RNZ from the cab, as he drove one of his own trucks.

"They didn't have much."

He had "minimal" safety problems, yet had been forced to spend $7 to $9 million on lawyers to defend a firm that is a lynchpin of the Far North economy, he says.

"Because of me, because I was former mayor, prominent number one in the north, Russian Māori boy ... I reacted, I fought back and the proof's in the pudding."

He claimed it was driven by a personal vendetta.

"It was driven by a little Māori girl that we had in NZTA and she's kicked it all off."

He would not identify the person be believed was behind it, but said she knew him personally.

"Probably she wanted a scalp, and tried to go out and get one, and she failed."

He complained to senior NZTA managers about this, including writing to the acting chief executive, he said; but would not release that letter to RNZ.

Semenoff declined to comment on what his experience might say about the regulation of the trucking industry.

The agency said it could not confirm if Semenoff had approached them with these complaints.

"Whether or not any such claim was or wasn't made has no bearing at all on the fact that the actions taken by the NZTA against SSL (Stan Semenoff Logging) were taken in response to serious and clearly documented safety issues," an agency spokesperson said by email.

"Most importantly, SSL has specifically acknowledged to NZTA that it failed to comply with its safety obligations ... under the Land Transport Act.

"Our job as the regulator is to act firmly and fairly, to protect public safety - that is exactly what we have done in this case."

The agency has dropped its long court battle against Semenoff. It said that by adding electronic logbooks and GPS across his whole fleet it was now safe and compliant - and would be audited again within six months.

NZTA said it could have laid charges or sought fines against him, but had opted not to; either for what it has called years of breaches of work time and rest time rules, or problems with logbooks. And there is also a long list of traffic offences.

"We do have the ability to issue infringement offences or lay charges for worktime offending, but the fines are relatively low.

"Revoking a TSL [Transport Service Licence] is a more effective tool where the Transport Agency has public safety concerns," it said.

Nor is the agency seeking any penalty payment on top of the half a million dollars of Road User Charges that NZTA said Semenoff Logging still owed; the courtsrecently confirmed it had calculated the RUCs correctly. The company has disputed it owes that much.

The agency had, as the law requires, applied a "fit and proper person test" in this case. And on balance decided "the introduction of electronic equipment in all vehicles which identifies speed, hours, fatigue, RUC and vehicle maintenance has demonstrated the operator's ability to operate in a safe and compliant manner", despite the history of non-compliance and unpaid user charges.

"Semenoff Transport's large, and if it was to have its licences revoked then it would leave over 100 families with no income, and that would be a tragedy for Northland," Bain said.

But "if that happened to anyone else there'd be hell to pay, and we've just got to make sure that somewhere along the line that $530,000 gets put back in the coffers where it belongs".

"The part that I'd be interested in knowing is would all the other truckie people - the single owner-drivers - would all those people be treated exactly the same by the NZTA?"

Transport Minister Phil Twyford's office said it would be inappropriate for him to comment on a particular regulatory case.

The National Party said the Government Minister Shane Jones had crossed the line when he involved himself in the Semenoff logging case, by approaching the head of NZTA about it a year ago; an NZTA OIA response last year confirmed a short meeting took place.

National's transport and regional development spokesperson Chris Bishop said that had been "totally inappropriate for a Minister of the Crown - in any other government that would see the Minister sacked."

Jones said last year he was concerned about the economic implications of the case for the region. He declined to be interviewed for this story.