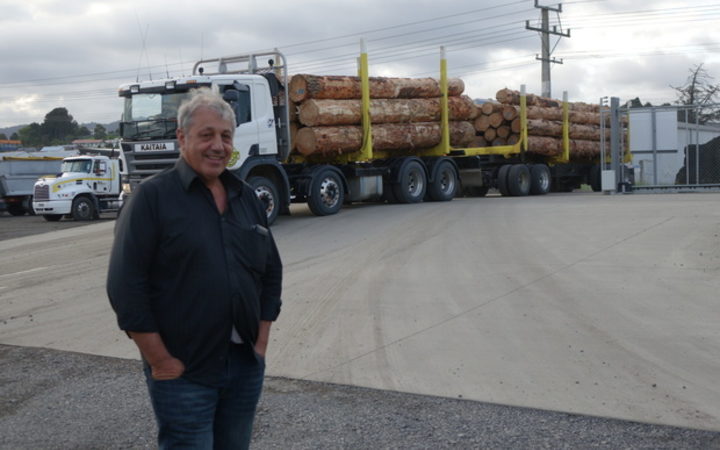 The company is one of a number owned by Mr Semenoff, a former mayor of Whangārei.

The Semenoff fleet carries an estimated 15 to 20 percent of the Northland log trade and the move will take more than 40 trucks off the road.

NZTA spokesperson Steve Haszard said the regulator had been trying without success for three years to get the company to remedy issues.

"The concerns relate to driver fatigue and behaviour and include breaches of work time and rest-time," Mr Haszard said.

"[There were] pervasive logbook issues and the accumulation of 116 speed and traffic-related offences over a four-year period."

"The agency has given Stan Semenoff Logging every opportunity to provide evidence of improvement but over two audits and three years we have seen the company is either unwilling or unable to comply with the transport operator safety standards. "

NZTA was revoking the licence for the safety of the company's truck drivers and all Northland's other road users, Mr Haszard said.

Mr Semenoff said he would challenge the revocation in court.

"[I reject] the comments made by NZTA and strongly disagrees that there has ever been any serious safety concerns."

In recent years, Mr Semenoff had brought in drivers from the Philippines in response to a shortage of drivers in the north.

"Our members complain that the company pays low wages and puts inexperienced people behind the wheel," Mr Abbott said.

He was pleased to see NZTA cracking down on an employer for safety breaches, instead of the workers.

"In the past, NZTA has continually blamed the drivers for [the breaches] and been wilfully naïve about the systematic goings-on that actually lead to them. So, to see them go for a company rather than just blaming a lot of individual drivers is a good step."

A forestry source who asked not to be named said Mr Semenoff's log trucks had been involved in several accidents, including an incident when one rolled in wet weather last year.

But the source said the crash rate was comparable to other trucking companies and Mr Semenoff's drivers seemed no less competent than those of other companies.

A Northland forestry management company said it had seen no evidence the company was operating unsafely.

Neil Geerkens, of Northland Forest Managers, said his company used Semenoff Logging on contracts and had no problems with the drivers or the trucks.

"We do a health and safety audit annually on them, checking their systems in terms of recording incidents, following up on reports, seeing that the drivers understand the safety policies and what they should be doing in the forest," Mr Geerkens said.

"We gave them 100 percent score on their last audit just under 12 months ago."

Taking Mr Semenoff's trucks off the road would disrupt forest harvests and log supplies in the north because there was no replacements available at short notice, he said.

"How on earth did it get to this point? He's the biggest operator in the north and this needs to be fixed quickly.

"I'm disturbed for the people in Northland, whose livelihoods will be upset.

"[It] is potentially disastrous for a number of people."

Mr Semenoff said he would be lodging an appeal against the revocation of his license in Whangārei District Court this week.