By Karen Pascoe for the Otago Daily Times

Mataura residents stood up last night and asked central government to rid their community of hazardous waste from an aluminum smelter.

The request for ouvea premix to be removed from warehouses in Mataura and Awarua was made by about 400 people who turned out to a volatile and angry meeting.

The people of Mataura wanted to know when the hazardous material would be removed from their township, after many were evacuated last week amid concerns flooding could have soaked 9500 tonnes of ouvea premix and released a highly dangerous cloud of ammonia gas. 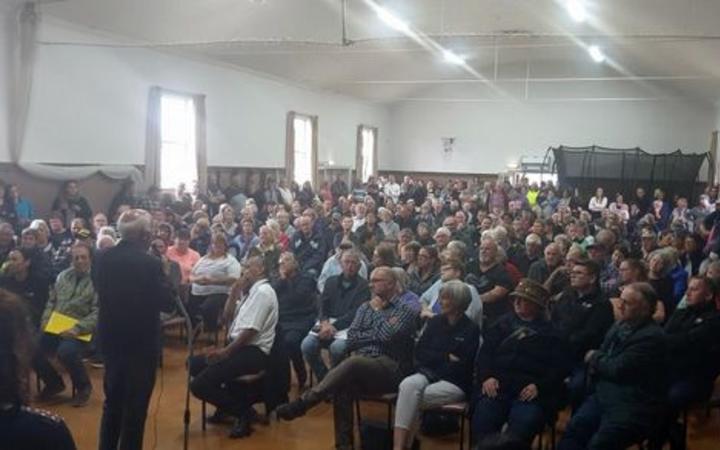 Hundreds turned out to a public meeting in Mataura over the storage in their town of ouvea premix that can generate poisonous ammonia gas if it gets wet. Photo: Otago Daily Times

Talking heads from different organisations were laughed at and heckled as the evening continued.

It began when the microphone wouldn't work at the beginning of the meeting. A shout came from the crowd, "the council's turned the power off".

Fire and Emergency New Zealand, Civil Defence, Hicks and others spoke about either the history of ouvea in the area, or what had happened during the floods last week.

Stop the Dross member Cherie Chapman said the organisation had been working for six years to try to get all parties to take responsibility for the storage of the dross, including the ouvea premix, and to try to work through a solution. 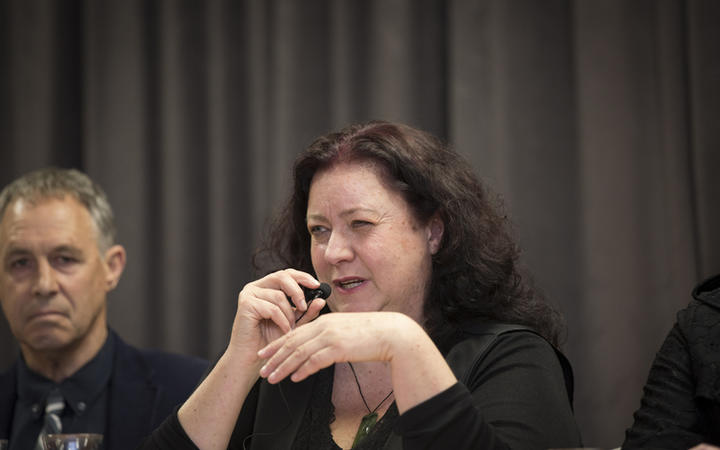 Stop the Dross member Cherie Chapman says the organisation has been working on the problem for six years. Photo: RNZ / Rebekah Parsons-King

Ministry for the Environment has plan for storage, meeting told

Director for the Ministry for the Environment Shaun Lewis said he had a conversation with the parties involved before yesterday's public meeting.

"We've got some ideas for where these materials will go.

They were continuing to look at legal options and making Mataura safe.

There would be a meeting next week to try to fast-track the process and he gave a time frame of four to six months to have the dross removed.

"If you think Rio Tinto are going to come to the party, you might as well as forget it.

"I hope this government will stand up and be counted," the person said.

"I'm afraid I don't trust anybody with what we've been through."

Government told to stand up to Rio Tinto

Biddle said the people of Southland had the opportunity to come together and hold the government to task.

"I feel really sad this evening because I feel as if we're missing a really big opportunity, here," she said.

She apologised to the crowd for what they had had to endure but said the town had an opportunity, with a national news camera present, to make a plea to government.

"We have one opportunity and this may well be it, to stand the hell up and stick together and to say to our government 'please Jacinda, please, our elected members have tried to sort this s... for years'.

"You need to stand up and if Rio Tinto don't come to the table we ask our elected members for the region to help Southland.

"You need to do that tonight for our generation and all the rest to come, I'm begging you."

Chapman then asked the crowd to pass a resolution that to urge the government to act now and remove the toxic waste from Southland.

The crowd was unanimous in its support.

Another meeting was planned for six weeks' time to keep the community informed on progress.

Neither could yet say when they expected to receive their legal advice.