It's time to get the togs out as much of the country is set to bake in sweltering temperatures this weekend. 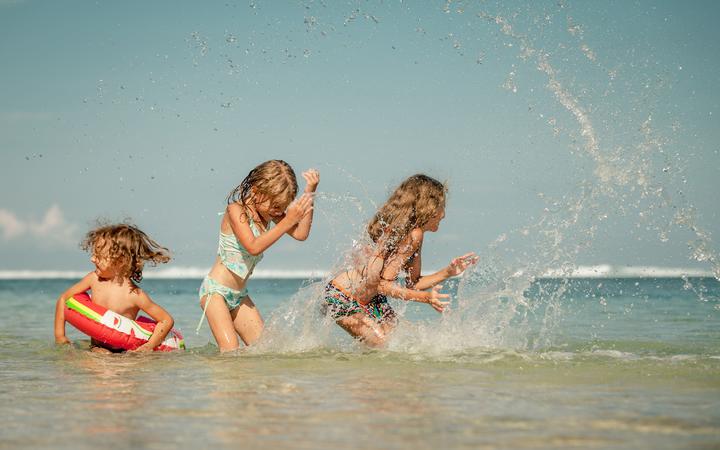 MetService says temperatures are expected reach 30 degrees in eastern parts of the North and South Islands.

But the heat comes with a number of warnings - with fire crews on high alert, as the risk of bushfires grows significantly.

The dry conditions mean water restrictions are also in place in central Taranaki and Ashburton, with the Nelson-Tasman area imposing restrictions next week.

It could be a busy weekend for firefighters as the temperatures climb following a long spell of dry weather.

Fire and Emergency's rural fire manager Tim Mitchell said basic things like mowing the lawn during the middle of the day posed a fire risk, and people should do them early in the morning when it was cool.

He said there were also other risks.

"Anything which has got a heat source or something hot about it. So a muffler on a tractor is exactly the same as a muffler on a four-wheel-drive vehicle or an ATV or a motorbike. So, yes, I think it's really important that people think about the vehicles and equipment that they may be using," Mitchell said.

He said some parts of the country were drier this time around compared to previous years.

Fire bans are in place in Northland, Canterbury and Central Otago, which means lighting a fire could lead to two years in prison or a fine of up to $300,000.

"We'd much rather educate the public and we'd much rather these fires just don't occur in the first place. So we're very much around prevention for these for occurring. Next few days are going to be very hot, warm, think about the activities you're doing. If you don't need to do them, please don't," Mitchell said.

With hot weather in the forecast through the weekend, remember to slip, slop, slap, and wrap! ☀️

The UV Index will be high to extreme across most of New Zealand over the next several days. pic.twitter.com/2SNFLLt1Mf

Health officials are also urging people to stay hydrated during the heat.

The Canterbury District Health Board said higher temperatures could be harmful, with the potential to overheat, which could be fatal.

MetService meteorologist Tahlia Crabtree said it was not officially a heatwave yet, as temperatures need to be well above average for five days to be classed as one.

Though the forecast suggests a heatwave is on the cards for some.

Across the main centres tomorrow Auckland is set for 26 degrees, Hamilton on 29, Tauranga 30, Wellington 24 and Christchurch at 31, although Dunedin is set to miss out tomorrow with forecast showers.

"At the moment, you're competing between Ashburton [which is] looking at getting up 32 degrees tomorrow, but for the North Island if you're in the Wairarapa region, Masterton also is looking at reaching 32," she said.

Dry conditions has also meant water restrictions are in place in Ashburton, and residents in Timaru are also being asked to conserve water.

The Ashburton District Council group manager of infrastructure services Neil McCann said the dry weather wasn't out of the ordinary yet but was warning people to not take their water supply for granted.

"We are limited by the amount of water we can draw from aquifers and from rivers to protect the environment. And it's all about when it is dry we use less water [as] the whole environment can be impacted by that," he said.

Those wanting a cooler spell would have to wait a while, as MetService is predicting the warm weather to continue well into next week.