Health Minister David Clark says experts will look into whether further active measures at the border are necessary amid an outbreak in China of a new coronavirus.

China put millions of people on lockdown in two cities at the epicentre of the outbreak that has killed 18 people and infected more than 630.

The previously unknown virus strain is believed to have emerged late last year from illegally traded wildlife at an animal market in Wuhan.

Of the known cases worldwide, Thailand has confirmed four, Vietnam reported two Chinese citizens had tested positive, while Singapore, Japan, South Korea, Taiwan and the United States have reported one each.

Dr Clark told Morning Report the inter-agency pandemic group would this afternoon examine whether further "active surveillance measures" were necessary at the borders.

"We are continuing to be alert at the border," he said.

"We want to make sure we're absolutely prepared, we make no apology for taking a very cautious approach."

The World Health Organisation (WHO) this morning announced it would not be declaring the outbreak a global health emergency yet.

The news in the WHO's recent conference had given more confidence to authorities around the nature of the coronavirus, Dr Clark said.

"The WHO in their press conference just now have confirmed that it's not highly infectious and that there have been no cases of [infected people transmitting the disease] outside of China, so they're focused very much on the Chinese situation," he said.

"They've recommended that the continuing efforts at the border in China are the key measure that needs to happen, but of course they'll support other countries that want to put border measures in place, and we want to do that, we want to make sure that we're doing what we can do."

Government scientists say they should have a lab test set up to screen for the virus in New Zealand by the end of next week.

The Institute of Environmental Science and Research (ESR) began developing a test after the World Health OrganiSation issued its guidance last Friday.

"Testing and validation of the method is required, but ESR estimate that it could have this up and running next week," an ESR spokesperson said in a statement.

"The interim arrangement is to send samples to Australia for testing, should they fulfil the case definition, until validated testing is available in New Zealand."

The test would screen for two genes so ESR could be confident in the eventuality of a positive result, the spokesperson said.

Other labs are also setting up and evaluating specific diagnostic tests. 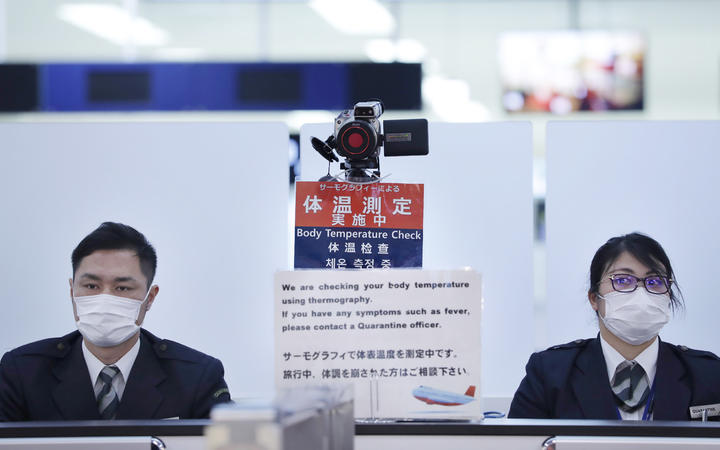 Officers work at a health screening station as they observe passengers arriving on a flight from Wuhan, China, where a SARS-like virus was discovered, at Narita airport, Japan. Photo: STR / JIJI PRESS / AFP

Yesterday, the National Party criticised the government for not doing enough to combat the potential risk in international arrivals.

However, Dr Clark said the response to the illness had been triggered "very early" and was in line with the national pandemic planning documents.

"From 6 January, messages have been going out to the sector, on the 6th and 10th. We've been actively managing the situation, and make no apology about that situation."

Director of Public Health Caroline McElnay told Morning Report an incident management team was set up earlier this week, and they continued to monitor the situation.

Dr McElnay said they had been liaising with WHO in Australia, and have ramped up health advice on New Zealand's borders to ensure international arrivals know what to do if they fall ill.

"We've been doing a lot of preparing and planning in case we get a suspect case here in New Zealand."

With cases now being detected in other Chinese cities beyond Wuhan, Dr McElnay said technical experts would be meeting this morning to give guidance on what needed to be done for visitors that fly direct from China.

She said they were also working with the Ministry of Education on spreading health advice for schools.

What do we know about the virus?

The newly identified coronavirus has created alarm because there are a number of unknowns surrounding it. It is too early to know just how dangerous it is and how easily it spreads between people.

There is no vaccine for the virus, which can spread through respiratory transmission. Symptoms include fever, difficulty breathing and coughing, similar to many other respiratory illnesses.

Three research teams are to start work on developing a vaccine, a global coalition set up to fight diseases said.

Preliminary research suggested the virus was passed on to humans from snakes, but government medical adviser Zhong Nanshan has also identified badgers and rats as possible sources.

"The early evidence at this stage would suggest it's not as severe," Australia's Chief Medical Officer, Brendan Murphy, said.

Jeremy Farrar, director of research charity Wellcome Trust, said: "We don't want to overstate the panic here because there is so much uncertainty. We want to keep a sort of calm, moderated approach to it, but we do have to take this incredibly seriously because you don't often get an animal virus coming into humans, passing between humans and being spread by the respiratory route.

"...It is not SARS. The virus is in a similar family to SARS but this looks different to SARS, and the difference is probably it's easier to pass between human beings."