Lockdown measures are increasing across China's Hubei province to try to control the spread of the new virus that has left 18 people dead in the country.

Wuhan, Hubei's capital of 11 million people where the virus first emerged, has no trains or planes in or out.

At least five other provincial cities are seeing clampdowns on transport.

There are more than 500 confirmed cases of the virus, which has spread abroad, with Singapore and Vietnam the latest affected.

However the World Health Organisation (WHO) said it was is too early to declare the deadly new coronavirus an international health emergency.

WHO director-general Tedros Adhanom Ghebreyesus said China had taken measures it believed were appropriate to contain the spread of coronavirus in Wuhan and other cities.

"We hope they will be both effective and short in their duration."

"Make no mistake, though, this is an emergency in China. But it has not yet become a global health emergency. It may yet become one." 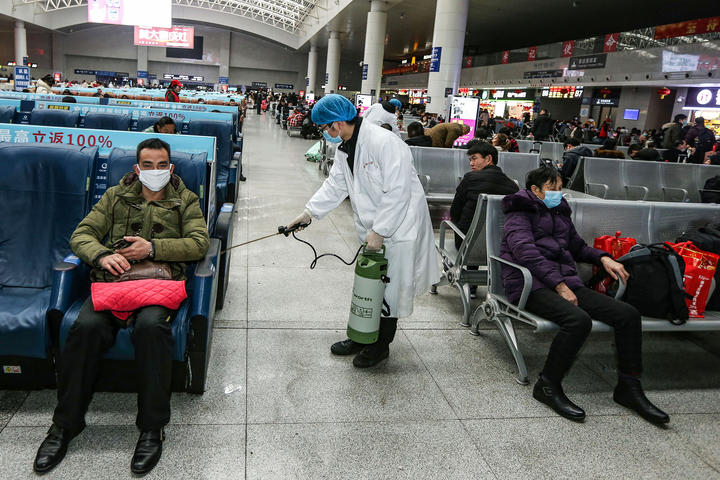 A worker disinfects the waiting area of a railway station in Nanchang, in China's central Jiangxi province. Photo: AFP

The new strain of coronavirus is believed to have originated at a market in Wuhan. One resident of the city said the atmosphere there felt like "the end of the world".

The lockdowns come as millions of Chinese people travel across the country for the Lunar New Year holiday.

What's the latest in China?

All the fatalities bar one so far have been in Hubei province. Most of the 17 victims there were elderly and suffered from other chronic diseases including Parkinson's disease and diabetes.

An 18th victim, an elderly patient, was announced on Thursday in Hebei province, near the capital, Beijing.

One Wuhan resident said on social media site Weibo that people were on the "verge of tears" when they heard about the closures.

Health authorities are reported to have made wearing a mask mandatory in the city. They are advising people to avoid crowds and public gatherings.

Demand for rubber gloves and surgical masks has soared. Taobao, the Chinese online retail giant, has warned sellers not to profit from the outbreak by raising prices.

Correspondent Patrick Fok said people in Wuhan were buying up face masks and stocking up on food.

"Hospitals in Wuhan are really stretched - big crowds of people trying to get checked and people who have the flu - whether or not they have the virus - also getting treatment as well."

In New Zealand, where no cases have been identified, government agencies are meeting today to discuss how to ramp up the response if the crisis continues to worsen.

At the same time, a separate group of experts will meet to review the approach so far and to provide further advice.

The government has triggered its official pandemic plan and set up an incident management team, but National says its handling has been slow and wholly inadequate.

Authorities around the world have announced screening measures for passengers from China.

Thailand has confirmed four cases of the virus, the most outside China. The US, Japan, Taiwan, South Korea have all reported one case each.

On Thursday, Singapore, Vietnam and Saudi Arabia confirmed cases The first US case was confirmed on Tuesday.

What do we know about the virus?

Currently known as 2019-nCoV, the virus is understood to be a new strain of coronavirus not previously identified in humans. The Sars (Severe Acute Respiratory Syndrome) virus that killed nearly 800 people globally in the early 2000s was also a coronavirus, as is the common cold.

Authorities have said this new virus originated in a seafood market in Wuhan that "conducted illegal transactions of wild animals". The market has been shut down since the beginning of the year.

Some researchers have suggested the illness may have originated in snakes. A study published on Wednesday in the Journal of Medical Virology said genetic analysis suggests snakes are "the most probable wildlife animal reservoir" for the virus, but this would need to be confirmed by other studies. Other researchers have questioned the theory.

There is also evidence of human-to-human transmission with the virus spreading from patients to family members and healthcare workers.

But understanding more about how the virus transmits between people is one of the major outstanding questions in this outbreak.

The virus infects the lungs, and symptoms start with a fever and cough. It can progress to shortness of breath and breathing difficulties.

Authorities around the world have announced screening measures for passengers from China.

Thailand has confirmed four cases of the virus, the most outside China. The US, Japan, Taiwan, South Korea have all reported one case each.

The first US case was confirmed on Tuesday. President Donald Trump said the situation was "totally under control" and that he trusted the information being provided by Chinese authorities

An earlier report that an Indian nurse working in the city of Khamis Mushait in Saudi Arabia had tested positive was altered by the Indian consulate in Jeddah. It said the nurse was suffering from Mers-CoV, also a coronavirus.