A large crack extending across a rockface in Hawke's Bay poses a danger for tourists and passersby, says the Department of Conservation (DOC).

It closed access to a walking track at Cape Kidnappers a year ago after two Korean tourists were injured by a massive landslide.

Now it has put a stop to a shortened walking tour being offered by Gannet Beach Adventures.

Tour operator Colin Lindsay said he was told on Friday that he had to stop operating.

DOC spokesperson Reg Kemper said it was because of the risk of rockfall near Black Reef, within the Cape Kidnappers Gannet Reserve.

He said DOC was informed of the crack last Tuesday.

"The reserve will remain closed until the Quantitative Risk Analysis report is finalised and there is a clear understanding of the degree of risk the rock fall hazards pose to public safety," he said. 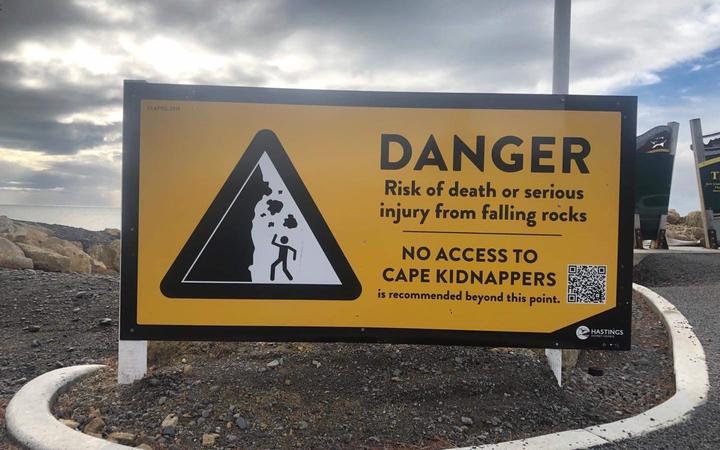 DOC is carrying out a risk analysis after a large crack extending across a rockface was found at Black Reef, within the Cape Kidnappers Gannet Reserve. Photo: RNZ / Anusha Bradley

Lindsay denied his business had been travelling through the closed part of the reserve.

"We have been travelling into that reserve - 900 metres into the reserve to the bird colony - but the closed section and they even have signage up and it's well publicised but at the nine-kilometre mark.

"We're only travelling to less than eight kilometres so we're actually over one kilometre away from the public closed area."