New Zealand has been urged to engage more fully in peace dialogues and take a leadership role outside the United Nations as tensions in the Middle East increase. 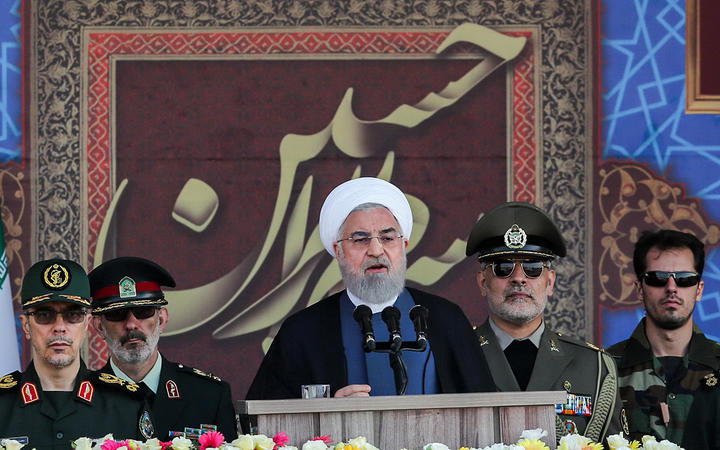 Defence and security expert Negar Partow made her comments as Iran's president warned all foreign forces should leave the Middle East, or they "may be in danger".

Tensions are high following a series of events in the region, beginning with the death of Iranian top general Qasem Soleimani almost two weeks ago and Iran's subsequent targeting of two US bases in Iraq with ballistic missiles.

In a televised Cabinet meeting on Wednesday Iran's president Hassan Rouhani issued a warning for European soldiers, saying they "may be in danger" and said all foreign forces should leave the region.

Dr Negar, a senior lecturer in the Centre for Defence and Security Studies at Massey University, Wellington, told Summer Report pulling Kiwi troops out of US military camps in Iraq would go against the defence force's commitments to the United Nations (UN). But, she said, that didn't stop New Zealand from attempting to de-escalate the situation in the absence of a current UN ability to do so.

"There is an escalation of tension we cannot control at the moment - we have to see how this will unfold, but that doesn't mean we should stop making an effort to de-escalate the tension," she said.

"Unfortunately the UN Security Council meeting last week was not very fruitful. They didn't actually reach consent for any report or statement, which means that our options in the international community are also limited. So maybe the solution is actually in looking at county's like New Zealand and Australia, outside those major power politics that we see at play."

She said it would not solve anything in itself by pulling Kiwi troops out, only to have them return because of another incident or security situation in the region.

"The NZDF has had the highest number of deployment to the Middle East region since 2000. Our engagement keeps continuing, we cannot come out of our commitments from the UN," she said.

"I think it is a time where we should have much more of a leadership role resolving these issues... and we really need to get engaged in the discussions of peace.

"In particular for our credibility, because we can take the troops out and two years later we are going to have another problem in the Middle East and our troops will be back again. While it is very important that we keep an eye on the health and well-being of our troops, it's not something we can resolve with a short-term strategy."

Dr Negar said Iran was aggrieved by the European Union's position on the nuclear deal that the US pulled out of last year and Iran further pulled back from after the assassination of its top commander Qasem Soleimani this month. The deal had limited Iran's capacity to develop nuclear technology and allowed UN inspectors to visit sites in the country.

EU threats of furthering sanctions that the US has imposed crippling the nation's economy had further increased tension.

"Iran is extremely frustrated with the lack of determination by the EU to deal with the nuclear issue and now they are telling Iran off again. Exactly what President Trump did, so now Iran has to take a position and that has a defensive functionality as well."

She said the threat facing Kiwi troops was not new, but the Iranian president's latest comments about the danger foreign troops now face were partly mean to distract political attention away from domestic problems, including anti-government protests in recent days and the shooting down a Ukrainian plane after Iran's military launched rocket attacks at US bases in neighbouring Iraq.

"It's an ongoing threat and the escalation of tension causes more problems for our soldiers, like any other soldiers, who are working in American camps.

"It was one of a series of comments put out about the shooting down of the Ukrainian plane and all sorts of issues, like unity in Iran. But that comment means that you can create more tension and distraction attention away from something."

She said Iran was politically divided, especially after Iran's authorities admitted, after initial denials, that the military shot down the passenger plane, killing 176 civilians, after it was mistaken for a US military craft.

"You can see the signs of a great rift between the Revolutionary Guards and the government. Mohammad Javad Zarif, Iran's Minister of Foreign Affairs yesterday talked about and actually mentioned that they're upset about the lies they are hearing. So it means that there is a gap between the Revolutionary Guards who were holding the orders for the shooting of the plane and the others in government, who have a much more reformist approach like Rouhani, who don't want to escalate this tension."