A couple on a tandem bike towing a coffin from Invercargill to Wellington are about halfway on their journey to protest the drug-buying agency Pharmac's budget. 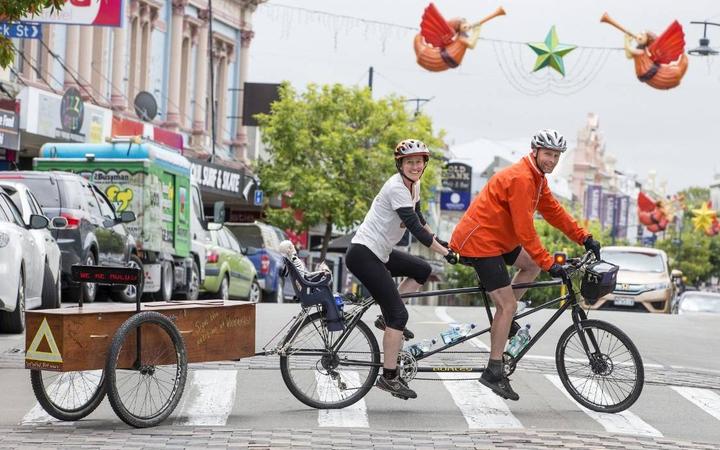 Camilla and Julian Cox in Timaru with the coffin in tow. Photo: Stuff / John Bisset

The pedal-powered pursuit is set to take about 18 days.

Julian Cox told Summer Report the visually-striking protest ride was attracting attention and there was an awareness among the public the issue affected everyone.

"Most people are very positive, we often get a laughs when we pass an intersection and so on, and then I think we get one or two people who genuinely think we have a body in there...

"But certainly, as soon as we explain what we're up to I think people very much understand the thinking behind it and that's it's very very important."

The Cox's daughter has cystic fibrosis, a degenerative disease that takes it toll on sufferers over time. He said the tandem ride was both a personal mission to bring hope of relief and maybe even a cure to his daughter Rachel and to bring New Zealand in line with other countries that already had access to drugs that effectively treat the disease.

"Unfortunately none of these drugs are funded in New Zealand as yet. There are funded in Australia and the UK, USA and other countries, so we just want to bring it up to par with those countries.

He said living with a chronic condition was tough for everybody, especially his daughter.

"My wife has worked for many years to be able to look after Rachel and bring her on hospital visits and so on, and of course it takes a mental toll. There's a lot of couple's that don't last the distance when they have that sort of stress within the family."

"But then when you have a drug you know is available and you've got one ray of hope there on one side and when it's just not within reach it's quiet devastating and it gets quite devastating and depressing as well."