A construction worker for Auckland's City Rail Link has described the moment he rescued a child from underneath a runaway double-decker tour bus earlier this week.

On Monday the double-decker bus rolled backwards and hit pedestrians on the corner of Victoria Street and Albert Street. Three people suffered minor injuries from the incident.

When the bus came to a stop it hit a construction site.

A post on the City Rail Link's Facebook page described one of their construction worker's, Steely Ashley, as a "brave selfless person", who instinctively crawled under the bus to look for a woman and her baby who had been knocked down.

In the accompanying video, Ashley described how the sound of a loud crack drew his attention to the accident, before he "freaked out a little bit and then all of a sudden, body and brain went into autopilot".

"I ran around to the front of the bus, heard a child screaming, dreaded looking under the bus because I thought I was going to see a poor kid pinned against a wheel or something," he said.

"Looked anyway, saw she was free, crawled under the bus, grabbed her, pulled her out, got out and gave her straight to St John who passed the baby on to the mum." 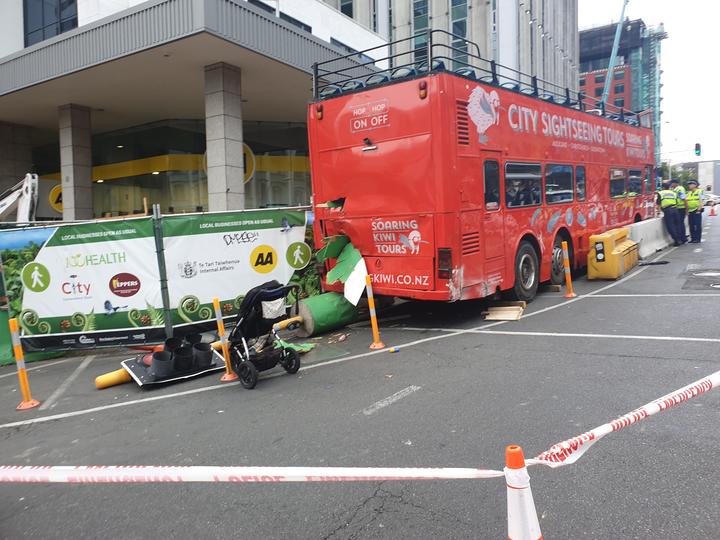 The scene of the incident on Monday. Photo: RNZ / Matthew Theunissen

Satender Phogat told RNZ he was working in a local shop when he saw the bus rolling backwards as a mum and a young baby were just going through a pedestrian light.

"I wondered what the hell was going on, why was the bus going like that, and then I see inside there's no driver in the bus."

He said the bus was going about 10-12 km/h and went right over the mother and child. The driver came a few seconds afterward, running after the bus.

"But the baby was right under the bus," Phogat said.

Phogat also helped pull the baby out from the front of the bus with Ashley.

"It was so horrible for me, I've never seen anything like this before... I took out the baby from the front tyre, me and one of the tradie guys who was working there."

Police enquiries were ongoing and WorkSafe said they had been notified of the incident.

A spokesperson at City Rail Link said they were not aware of any injuries to their staff members working close to where the incident happened.

"Staff working on the site have been stood down to help with the police enquiry."