A witness to a dramatic bus crash in central Auckland today says he was amazed nobody was seriously injured after the double decker vehicle rolled backwards down Victoria St and right over a mother and baby. 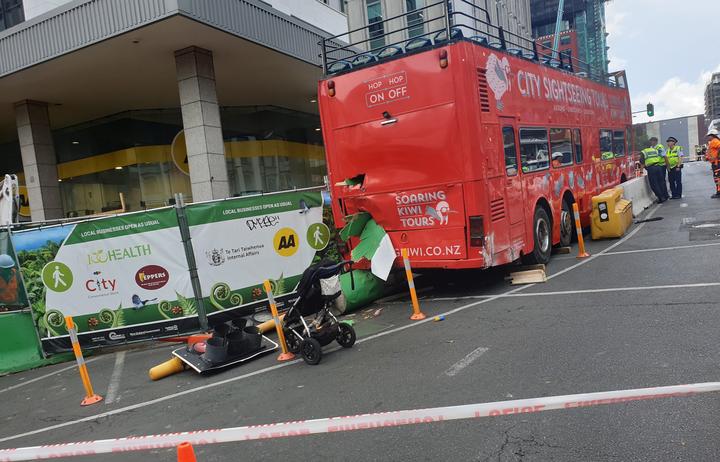 Police have confirmed three people have suffered minor injuries after the sightseeing bus hit pedestrians on the corner of Victoria Street and Albert Street shortly after 1pm today.

The bus came to a stop when it hit a construction site at the intersection.

Satender Phogat told RNZ he was working in a local shop when he saw the bus rolling backwards as a mum and a young baby were just going through a pedestrian light.

"I wondered what the hell was going on, why was the bus going like that, and then I see inside there's no driver in the bus."

He said the bus was going about 10-12 km/h and went right over the mother and child. The driver came a few seconds afterward, running after the bus.

"But the baby was right under the bus." 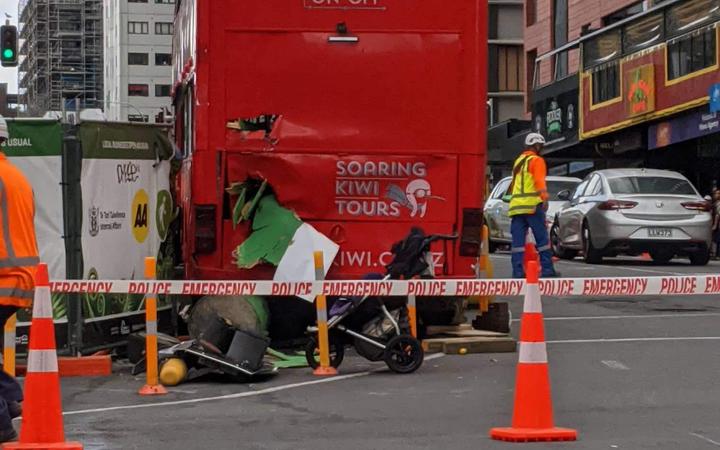 An abandoned pram at the scene which appeared to belong to an injured woman. Photo: Supplied

Diana Glenie said she was waiting to cross the road when she saw it unfold.

People were scrambling to help the woman and for a time they couldn't find her baby, before it was eventually found on the other side of the bus, Glenie said.

With another bystander, Phogat pulled the baby out from under the front of the bus, while the mother was pulled out near the back.

"The mum was at the back still and she was crying while we took out the baby, but he was all right.

"They are so lucky. I didn't want to see under the bus, to be honest, but when I heard the screaming, then I realised they are still alive.

"It was so horrible for me, I've never seen anything like this before... I took out the baby from the front tyre, me and one of the tradie guys who was working there."

Incredibly, the baby appeared to have escaped serious injuries, as had the mother.

Other witnesses described seeing a man they thought to be the driver running down the road trying to stop the out-of-control vehicle.

Soaring Kiwi Tours owner Mark Gilbert told RNZ the bus had been parked outside the Sky Tower on Victoria St West ahead of a tour of the city when it started rolling backwards.

There was no-one on board at the time.

Just before 4pm, police said they were still at the scene and the bus was in the process of being removed.

WorkSafe said they have been notified of the incident.

"We are making initial inquiries to establish what has occurred, and what our next steps might be," it said in a statement.

A spokesperson at City Rail Link said they are not aware of any injuries to their staff members working close to where the incident happened.

"Staff working on the site have been stood down to help with the police enquiry."